'He's got a legacy': Pilot killed in crash near Payson played crucial role in 2010 horse rescue 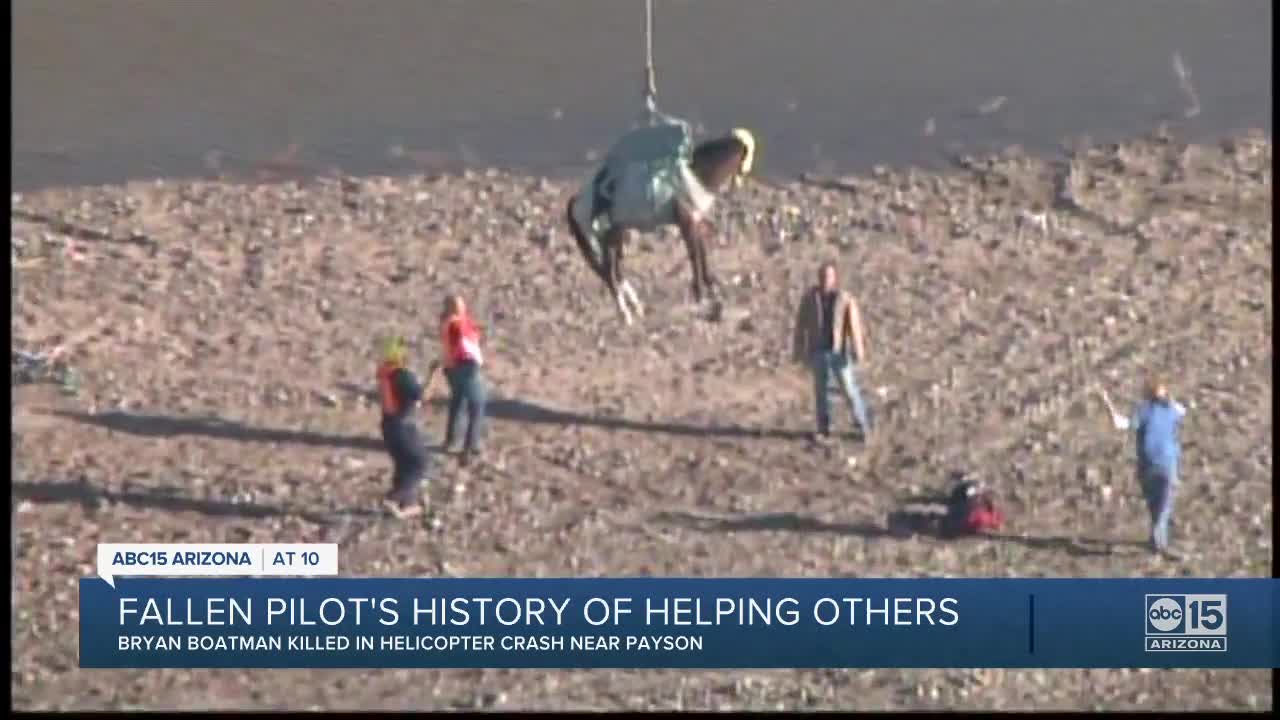 Bryan Boatman was killed in helicopter crash near Payson.

There are likely hundreds of stories of Bryan "BJ" Boatman. He helped fight fires as a helicopter pilot and flew visitors in and out of Havasupai, but there's one story that captivated Arizona. It's a story in which some may not know Boatman played a vital role.

Dolce, Vice President of the Arizona Equine Rescue Organization, is now holding on tight to the memory of Boatman's face, after learning the 37-year-old pilot died Tuesday while delivering supplies to fire crews battling the Polles Fire near Payson.

"He's so young," she added. "It's heartbreaking it happened to this family."

In March of 2010, Dolce was called in to help rescue Colorado, a horse swept away by the current on the Gila River. The horse found refuge on a sandbar but had no way of getting to safety.

"There was just no other way to get that horse out of that situation other than to helicopter lift," said Dolce.

So, she called Airwest, a helicopter company based in Glendale, hoping to gather a team to make it possible.

Dolce says Boatman, his father, Jeff, and another employee, were eager to help.

"He was just a very kind, compassionate person," she said. "You could tell he was excited too."

Boatman flew Dolce, a veterinarian and one other rescue team member onto the sandbar, and strapped the 850-pound horse onto a harness. Dolce recalls they used two, just to be safe.

Then, Boatman gave the pilot the green light to lift Colorado from the sand, and take him the mile or so down to where Jeff had a team ready to get him on a trailer, and back home to his owner.

"The horse just swept away from us up into the air and at that point, we're calling to the landing team and saying, 'he's on his way, he's on his way,'" Dolce added.

It was one of Dolce's most memorable rescues, but now, it means so much more.

"It's tragic, it's truly tragic," she said. "My first thought was shock honestly cause he's such a talented pilot. It's such an unlikely circumstance that someone like him would have an accident."

"Now BJ's family can look at that and it's one more thing they can remember about, you know, really a remarkable family member," she said. "I can't even reconcile the two stories, to be honest with you, but I'm happy that I have this story that I want to hang onto, which is... how remarkable he is."

The FAA and NTSB are investigating what caused Boatman's helicopter to crash. He leaves behind a wife and child.