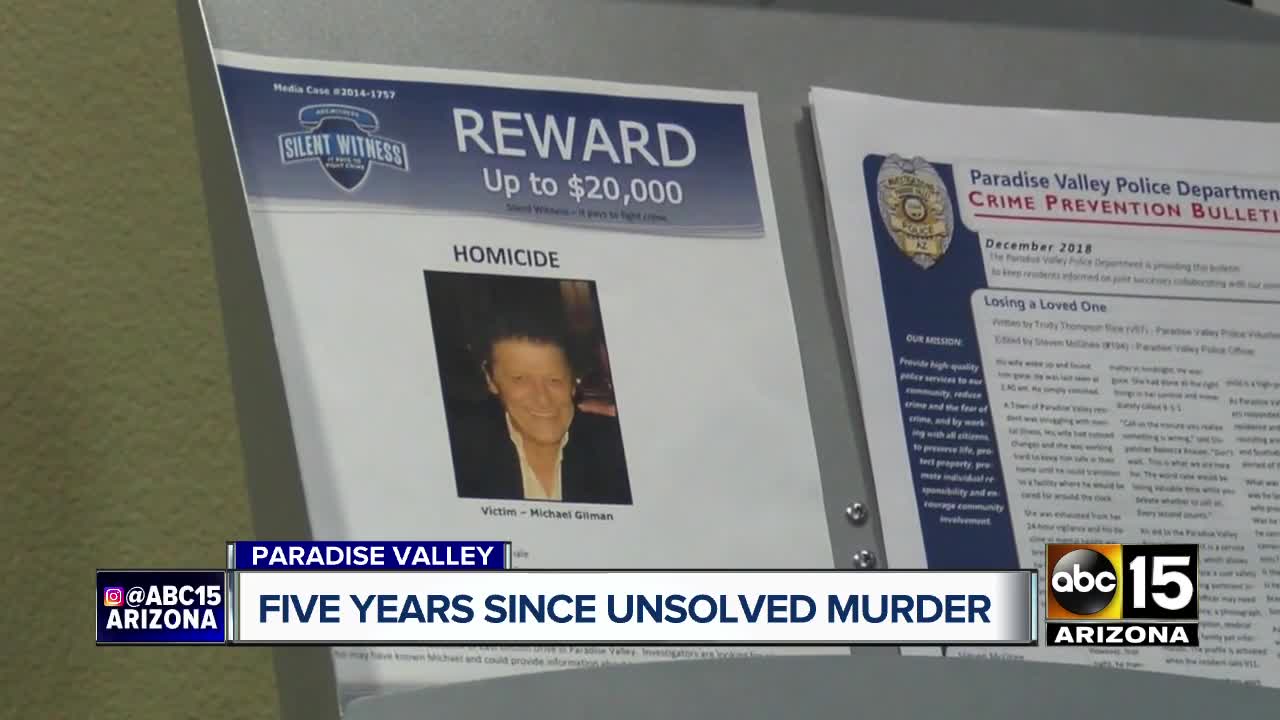 Authorities say there are only two unsolved murder cases in Paradise Valley.

"We were named in the top three for safest cities in Arizona," said Paradise Valley Ofc. Steven McGhee. "And the only one in the metropolitan area."

And it's often named one of the wealthiest towns in the country. To have murder is very rare.

"There are only two unsolved (murder) cases in Paradise Valley," said Ofc. McGhee.

McGhee said the oldest is from the 1970s and the only recent case is the death of Michael Gilman. Gilman was found deceased in his home near 54th Street and Lincoln Drive on April 29, 2014.

"It's one of the most bizarre and strange things to, unfortunately, happen in my life," said Charlie Venturi, a Miami businessman, and friend of Gilman.

Gilman was a mentor to Venturi when Venturi was starting his entertainment business. He credits Gilman for its ongoing success to this day. Venturi still can't make sense of the brutal crime. Gilman was stabbed more than 50 times according to the Maricopa County Medical Examiner's Office.

"This person came out of the shadows solely brutally targeting him and then disappeared," said Venturi. "Nothing is typical about the crime. There doesn't even appear to be any motive."

One key piece of evidence is video captured by security cameras. After the murder, surveillance cameras captured Gilman's silver BMW SUV, followed by what police believe was the getaway car, a red Dodge Intrepid. Both vehicles turned east on Shea Boulevard from Scottsdale Road. The BMW was later found burning near Shea and Via Linda, nearly ten miles from the crime scene. Police say someone knows something that could help in an arrest.

"If you think it isn't important or if you think it's related or connected, give us a call," said Ofc. McGhee. "It's that missing piece that could link everything together."

You can also call Silent Witness at 480-WITNESS with information. The reward for information that leads to an arrest is now at $20,000.