What more can the governor do to help Arizonans weather the financial fallout of Coronavirus? 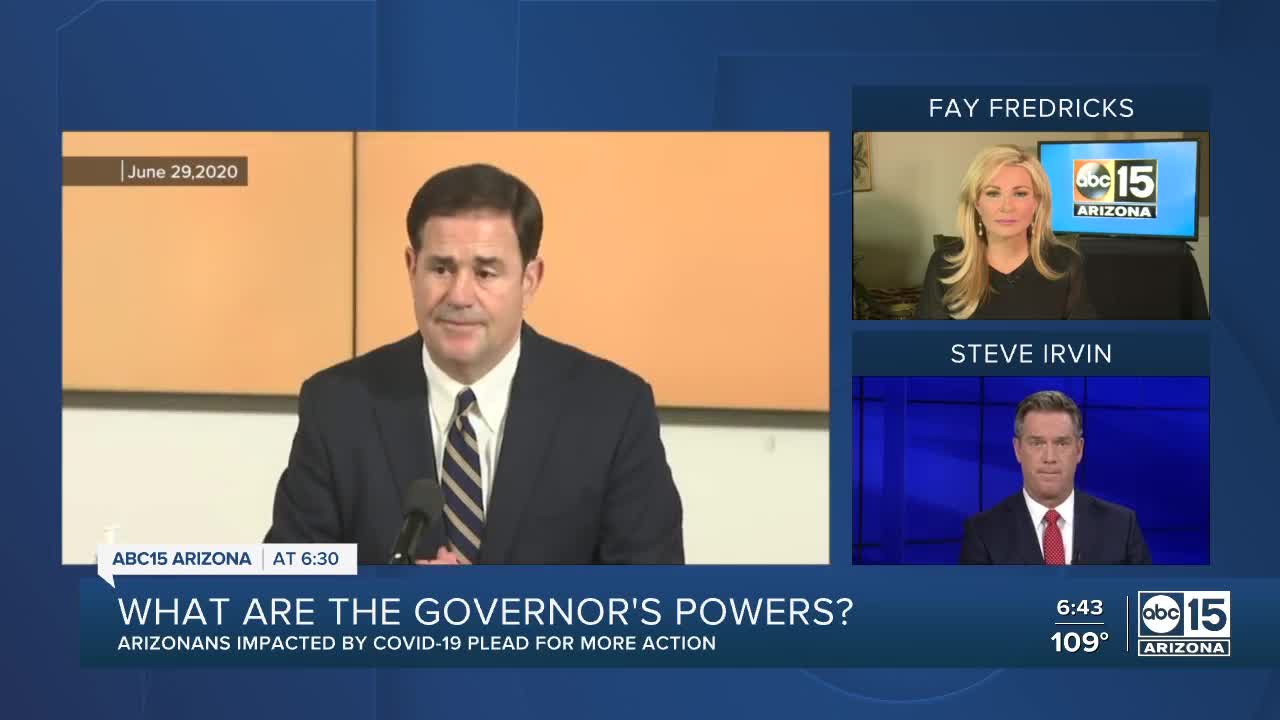 ABC15 looks into what Gov. Ducey can actually do to help citizens amid the coronavirus, and if he's doing everything he can.

PHOENIX — From telemedicine for pets to the Stay Home, Stay Healthy, Stay Connected policy, Governor Doug Ducey has used the power of executive orders in what he has called an attempt to protect lives and livelihoods.

Of the 40 executive orders the Governor has issued since the state of emergency in Arizona, none were able to keep Valley mom Stephanie Akins and her seven-year-old daughter Sadie, in their Peoria apartment.

She was a ride-share driver whose income dropped in April after the stay at home order was put in place.

Akins says she used her stimulus check to cover April rent. She was going to have to rely on unemployment insurance or state rental assistance to cover May.

Neither came through. But she says she thought the Governor’s executive order postponing evictions would keep her in her apartment.

He issued the executive order on March 24. “This ensures that no one who is suffering the impact of COVID-19 is going to be put out of their house because of an inability to pay their rent,” he said at a March 25 press conference.

“I thought for sure they would take to heart like what the Governor said and it wouldn’t be an issue, you know,” Akins said.

But it doesn’t actually stop evictions. The order is supposed to delay the Constable from removing tenants from properties until July 23.

Akins says when her unemployment finally came through, the landlord refused it and evicted her anyway.

“You have no idea what this feeling is like to know that those words pretty much meant nothing at this point,” she said.

From March 24 when the executive order was issued through June 30, a total of 5,333 eviction actions have been filed according to the Maricopa County Justice Courts.

It is far fewer than the 2019 number during that same period of time. That number is nearly 20,000 evictions, but it still means people are being put out.

And with Coronavirus cases rising, the extra $600 federal unemployment payments going away, and industries closing down for a second time, should Governor Ducey be doing more?

“I really just truly hope that he realizes something needs to be done,” Akins said. “I know it’s scary and I know it’s new to everybody. But you’re not helping it by not helping us, you know? By not sticking up for us, by not standing up, it’s not just a few of us that are going to be falling through the cracks.”

But legally, what more does the governor have the power to do?

A lot according to Professor Paul Bender, Dean Emeritus at the Sandra Day O’Connor School of Law at Arizona State University. He is an attorney with many decades of experience in Arizona and US Constitutional law.

“As long as he says ‘I need to do this to respond to the emergency,” Bender said the Governor is afforded enormous power during a public health crisis by Arizona Revised Statute 26-303.

Bender says the words “all police power” is what gives the Governor nearly complete authority to manage the emergency how he sees fit.

“The Supreme Court has used the words ‘police power’ for years to describe the legislative power of the state,” Bender told ABC15. “So it sounds on its face as if it’s everything the state could do legislatively.”

We asked if that unilateral power could be applied to stopping evictions, moratoriums on foreclosures, or an increase in unemployment insurance payments.

“Anything that reasonably relates to dealing with the emergency, I think the statute seems to say you can do it,” he said. “I wouldn’t have written it that way but that’s what it seems to say.”

We asked Governor Ducey’s office what it plans to do to prevent foreclosures and evictions when the executive order expires. We also asked about the extra $600 in federal unemployment assistance that goes away at the end of July.

In a statement, spokesman Patrick Ptak told ABC15, “Our office is working closely with groups including constables, community legal services, the courts, local governments, partner agencies and more to determine any additional actions that may be needed following the order's expiration.”

But it’s not just the tenants who need money, landlords have bills too.

“We can’t expect property owners to continue to go without income,” Courtney Gilstrap LeVinus told ABC15. She is the CEO of the Arizona Multihousing Association which represents landlords. “I mean many of our owners are small operators and they can’t go four or five months without income.”

She says nearly $127 million dollars is available for state rental assistance that is mostly distributed by counties and cities, but it is too hard for renters to access.

“There’s too much documentation that the resident has to provide either the state or the local government. We have to streamline these processes so these funds can be deployed quicker,” she said.

Ptak told ABC15, “We've worked with the Department of Housing to make changes that will get these dollars to those who need them faster.”

But it’s long past due for people like Akins.

She and her daughter were kicked out of their apartment in June.

“I can’t be secure in my answer and tell her ‘hey we’re gonna be fine,’ because are we going to be fine?”

For now, they are sharing a room at a friend’s house. She says she has until the end of summer to find a new job and a new home. That’s a task made even harder with a new eviction hanging over her head.

“This is no fault of my own, you know? And I feel like my hands are tied behind my back and I can’t do anything about it. I feel helpless and it’s not fair.”