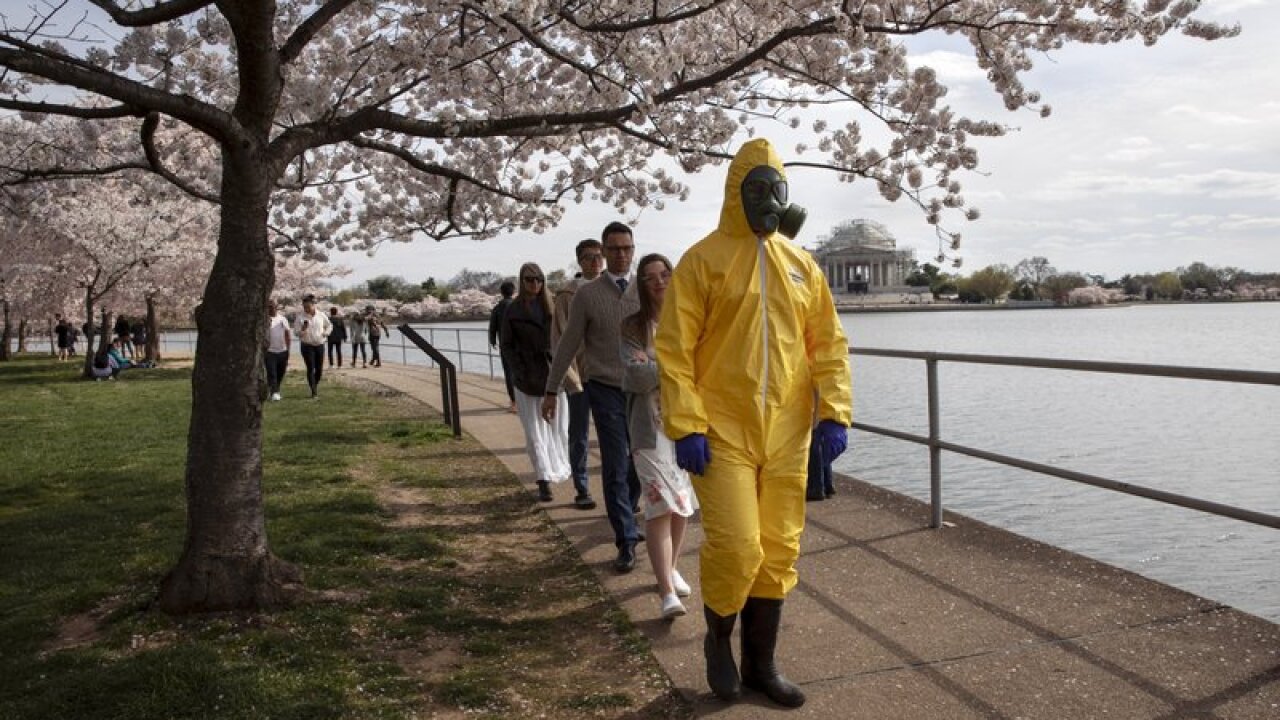 As signature cherry blossom trees go through peak bloom in the nation’s capital, officials in the District of Columbia are resorting to mass street closures to keep large crowds away in the face of the coronavirus pandemic.

Public officials are publicly pleading for low turnout and one prominent local chef has launched the #StayHomeCherryBlossomsChallenge to make low visitation numbers into some sort of community goal. Health officials have said limiting public gatherings and keeping a distance of about 6 feet from others would help stop the spread of the disease which has sickened about 300,000 worldwide.

The Metropolitan Police Department closed down a a dozen different streets, bridges and traffic circles Sunday morning trying to limit the traditional crowds who pack the area around the Jefferson Memorial and the tree-lined Tidal Basin. The iconic cherry blossoms reached peak bloom on Friday and should stay that way for about 10 days.

“It’s getting weirder and weirder,” said National Park Service spokesman Mike Litterst of his unprecedented challenge to keep one of Washington’s crown jewels as empty as possible.

Officials are instead steering cherry blossom fans to their live bloom cam and virtual video tours of the Tidal Basin. “It’s educational and it gets you close to the blooms” said Karyn Le Blanc of the Cherry Blossom Festival.

“These are strange times,” she added.

The crowds, Litterst said, have already been “a fraction of what we would see in a normal spring.” Friday’s crowd’s were “manageable” he said, but Saturday brought a surge in visitors that convinced authorities to take extraordinary steps.

It appeared to be working: At the Tidal Basin Sunday, visitors wandered in small clusters of three or four instead of larger groups. The multiple closures caused a few loud traffic snarls, but in some areas families with strollers enjoyed the newly pedestrianized streets. One man walked through the area in a white hazmat suit.

Washington Mayor Muriel Bowser on Friday pleaded with both residents and visitors to stay inside despite the sunny forecast. Washington’s Metro system closed down a pair of stations nearest to the Tidal Basin in the hopes of lessening crowds.

“Don’t treat this like a normal weekend, there will be more nice days,” Bowser said.

She declared a state of emergency and closed all schools through the end of April. Health officials here say the total number of infections in the nations capital now stand at 97, with the second virus-related death announced on Sunday. Washington’s tally doesn’t include people who may have been infected in Washington but live in nearby northern Virginia or southern Maryland.

D.C.-based celebrity chef and philanthropist Jose Andres took to Twitter Sunday morning to plead for community compliance in avoiding the Tidal Basin. Under the hashtag #StayHomeCherryBlossomsChallenge, Andres pledged to “cook a huge Paella for thousands of Washingtonians” next year if they kept the number down. His followers rallied around and started posting pictures of the cherry blossoms in their yards and neighborhood for all to virtually enjoy online.

For most people, the new coronavirus causes only mild or moderate symptoms, such as fever and cough. For some, especially older adults and people with existing health problems, it can cause more severe illness, including pneumonia.

The vast majority of people recover from the new virus. According to the World Health Organization, people with mild illness recover in about two weeks, while those with more severe illness may take three to six weeks to recover.

The Associated Press receives support for health and science coverage from the Howard Hughes Medical Institute’s Department of Science Education. The AP is solely responsible for all content.