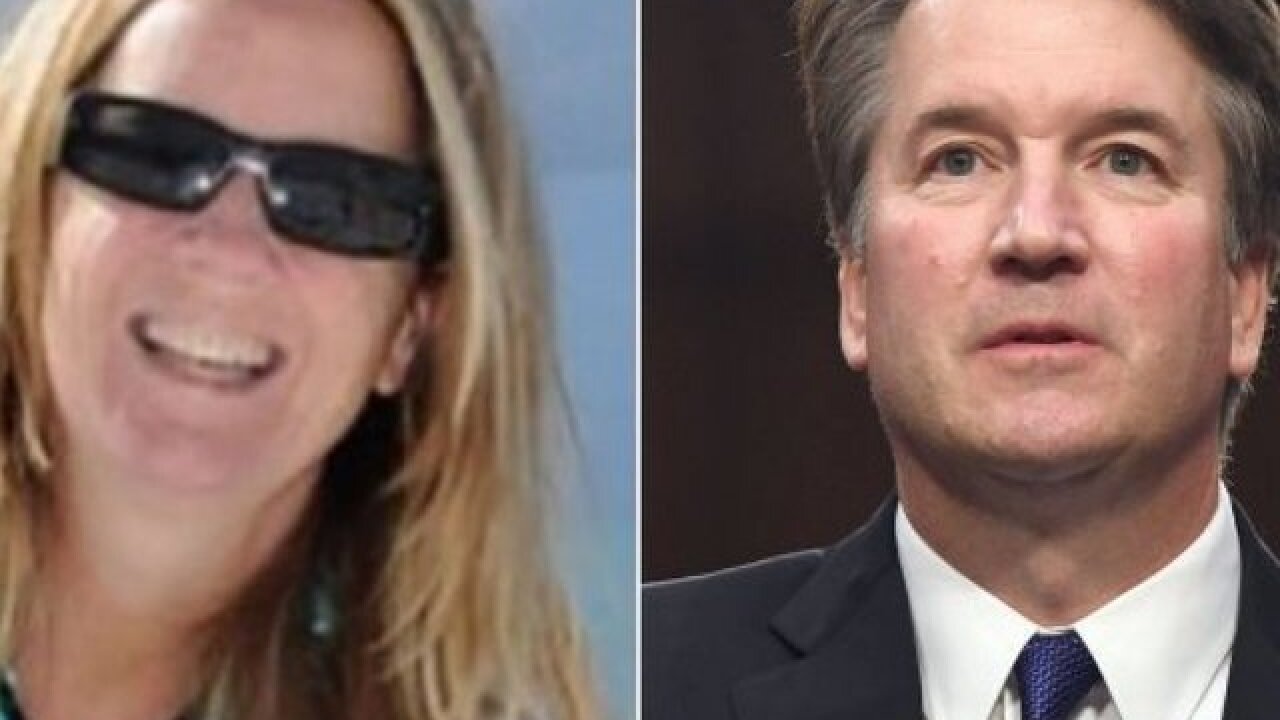 As two parents watched their children play. At a restaurant with a friend. As a neighbor walked her dog.

In all three otherwise everyday scenes, Christine Blasey Ford described to others about being sexually assaulted many years earlier by a future federal judge, according to sworn affidavits her lawyers said Wednesday they submitted to the Senate Judiciary Committee. A fourth from her husband says that during a 2012 couples therapy session, Ford named her attacker as Brett Kavanaugh. President Donald Trump nominated Kavanaugh July 9 to the Supreme Court.

Kavanaugh has staunchly denied that he ever sexually assaulted anyone. His allies, including Trump, have cast doubt on the accusation in part because of a lack of corroboration.

Here's a look at the statements, signed this week, that are certain to play a key role in Thursday's committee hearing where she and Kavanaugh are expected to testify separately.

Ford went public with her story, and her name, in The Washington Post. Ford and Kavanaugh, students at separate private high schools in Maryland, both attended a party when she was 15 and he was 17, according to her account. Ford says Kavanaugh pushed her into a room and pinned her to a bed. While another boy watched, she says, Kavanaugh tried to pull her clothes off and covered her mouth when she tried to scream. The third person in the room jumped on the bed, the three tumbled to the floor, and Ford escaped. Both boys were inebriated, she said. Ford told The Post that she told her therapist and her husband about the encounter in 2012.

Kavanaugh, confirmed to the appellate court in 2006, has repeatedly and flatly denied Ford's accusation.

Trump has said he wants to hear from Ford but also stood behind his nominee. Ford's story, he said, is part of a Democratic "con job." On Wednesday at the United Nations, he called Kavanaugh "an absolute gem."

That's set up a he-said, she-said standoff over the allegations. Trump, Kavanaugh and many of their allies have pointed out that the incident happened more than three decades ago and that Ford apparently didn't report it at the time.

Russell Ford, with whom Christine Blasey Ford has two children, said in his statement that he first learned that Ford had "any experience with sexual assault" was around the time the couple got married in 2002. But at the time, Russell Ford's statement says, she provided no details.

That changed at 2012 at a couples therapy session, he says in the affidavit.

"She said that in high school she had been trapped in a room and physically restrained by one boy who was molesting her while another boy watched," his statement says. "She said she was able to escape before she was raped, but that the experience was very traumatic because she felt like she had no control and was physically dominated."

He added: "I remember her saying that the attacker's name was Brett Kavanaugh, that he was successful lawyer who had grown up in Christine's home town and that he was well-known in the Washington, D.C. community."

Kavanaugh's name came up again while Trump was in the process of selecting his nominee for the first Supreme Court seat, Ford's husband wrote. He said his wife mentioned that she was afraid Trump would pick Kavanaugh, who was on his list of candidates. Trump instead chose Neil Gorsuch.

Then Justice Anthony Kennedy announced he was retiring, opening up a second seat. The subject came up again, he said.

Adela Gildo-Mazzon states in her sworn affidavit that Ford told her the story about the assault, but did not mention Kavanaugh's name, when the two met at a Mountain View, California, restaurant in June 2013. Gildo-Mazzon says she has a receipt from the restaurant for that meal.

"Christine told me that she had been having a hard day because she was thinking about an assault she experience when she was much younger," Gildo-Mazzon states. "She said that she had been almost raped by someone who was now a federal judge. She told me she had been trapped in a room with two drunken guys, and that she then escaped, ran away and hid."

Gildo-Mazzon wrote that after she read Ford's story in The Washington Post on Sept. 16, "I contacted Christine's lawyers to advise them that she had told me about this assault in 2013."

Keith Koegler's statement says Ford revealed her story, and Kavanaugh's name as the alleged attacker, over two years beginning in 2016.

The first was in 2016 as Ford and Koegler, her son's baseball coach, "were standing together in a public place watching our children play together." It was shortly after Stanford University student Brock Turner was sentenced for felony sexual assault after raping an unconscious woman on campus.

"Christine expressed anger at Mr. Turner's lenient sentence, stating that she was particularly bothered by it because she was assaulted in high school by a man who was now a federal judge in Washington, D.C.," Koegler wrote.

On June 29, two days after Kennedy announced his retirement and nine days before Trump nominated Kavanaugh, Ford wrote Koegler an email that said "the person who assaulted her in high school was the president's `favorite for SCOTUS,"' an abbreviation for Supreme Court of the United States, according to Koegler's statement.

Koegler says he responded: "I remember you telling me about him, but I don't remember his name. Do you mind telling me so I can read about him?"

Rebecca White, a neighbor who says her children went to elementary school Ford's children, says she was walking her dog in 2017 when she encountered Ford outside her home. "She told me she had read a recent social media post I had written about my own experience with sexual assault," White's statement says. "She then told me that when she was a young teen, she had been sexually assaulted by an older teen. I remember her saying that her assailant was now a federal judge."