Oscar Pistorius sentenced to 6 years in prison for murder 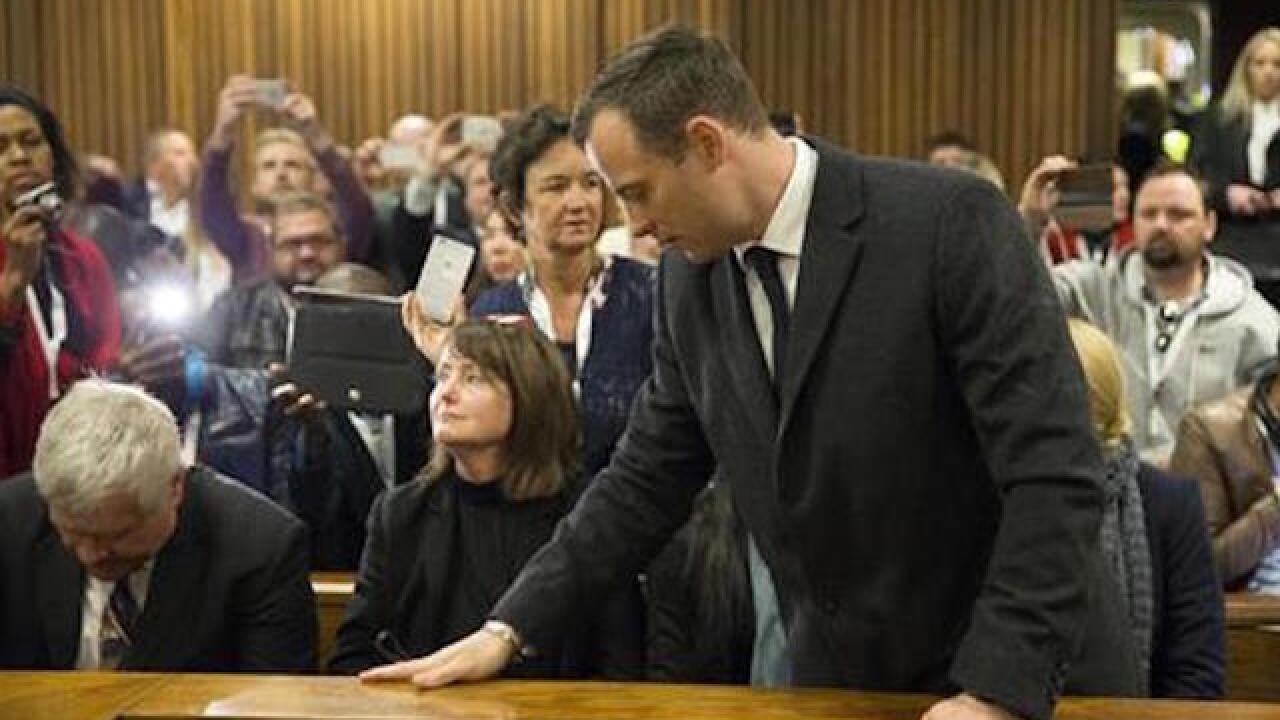 PRETORIA, South Africa (AP) — Oscar Pistorius, the double-amputee Olympian described by a judge as a "fallen hero," was sentenced on Wednesday to six years in a South African prison for the murder of girlfriend Reeva Steenkamp, in a ruling viewed by some as too lenient.

However, Judge Thokozile Masipa appeared to anticipate criticism of a jail term that fell far short of the normally mandated 15 years for murder under South African law, declaring: "Our courts are courts of law, not courts of public opinion."

Pistorius, who shot Steenkamp through the door of a toilet cubicle in his home in 2013, was asked to stand and face Masipa as she announced his sentence in a wood-paneled courtroom in the South African capital, Pretoria. He was calm after the ruling, embracing his aunt and tearful sister before being led down a courtroom staircase to a holding cell ahead of being taken to prison.

Later, a convoy of police cars with lights flashing and sirens wailing left a side entrance of the courthouse. In the convoy was a van with tinted windows, possibly carrying Pistorius.

The sentencing was the latest act of a three-and-a-half year legal drama that has often played out on live television and shown the fall from grace of a runner once viewed as an inspiration to many for overcoming his disability. Both of Pistorius' legs were amputated below the knees when he was 11 months old because of a congenital defect.

He made history by running at the 2012 Olympics on his carbon-fiber running blades, and was one of the world's most recognizable athletes.

"He's a fallen hero, he has lost his career and he is ruined financially," said Masipa, who originally convicted Pistorius of manslaughter, a ruling that was overturned by an appeals court that instead convicted him of murder and sent the case back to her for sentencing.

In explaining the sentence, Masipa said there are "substantial and compelling circumstances" to show leniency toward Pistorius because he is a "good candidate for rehabilitation," is unlikely to commit another crime and had shown what appeared to be genuine remorse over Steenkamp's death.

Pistorius, 29, maintained he killed Steenkamp, a 29-year-old model and reality TV star, by mistake thinking she was an intruder hiding in the bathroom early on Valentine's Day 2013. Prosecutors alleged that he killed her intentionally after the couple argued.

Pistorius will be eligible to apply for parole after three years, according to legal experts. Prosecutors, who had asked that he be sentenced to 15 years in prison, can appeal for a heavier sentence but have yet to comment on whether they will do so.

"The family accepts the judgment," Anneliese Burgess, a spokeswoman for the Pistorius family, said outside the courthouse.

The Steenkamp family did not criticize the sentence. "The family has said it before they wanted he law to run its course. It has done so. No further comment. They will keep a dignified silence," said Dup de Bruyn, Steenkamp family representative.

Legal expert Marius du Toit described the sentence as "lenient but not wrong."

Some people who gathered outside the courthouse were critical.

"The law didn't take its course," said Dukes Masanabo, a South African sports official who had hoped Pistorius would be sentenced to 10 to 12 years, not six.

He said the sentence is too light because Pistorius was sentenced to almost the same sentence — five years — for his earlier manslaughter conviction. He served one year of that sentence before being place under house arrest at his uncle's mansion in Pretoria, and he had some freedom of movement outside the home during certain hours.

The time that Pistorius has already served in prison is not subtracted from his new sentence.

Another South African, Sarah Maete, said she wanted Pistorius to get the full 15 years in prison for murder.

In delivering her sentence, Masipa referred to the difficulties she faced in deciding a sentence that "satisfies every relevant interest" in a case that captured the world's attention and led to extremes of opinion over the celebrated athlete. She noted that Pistorius had fired four times — not once — through the closed toilet door and spoke of the devastating effect the crime had on Steenkamp's family.

Steenkamp's parents, Barry and June, were present in the courtroom, which was packed with relatives of both Pistorius and Steenkamp, journalists and other observers.

Pistorius' defense lawyers had asked for no jail time at all, saying he should be allowed to do charity work with children.

Ulrich Roux, a South African lawyer and commentator who is not involved in the Pistorius case, said it had opened a window for South Africans into how their justice system works, including cross-examination and how a judge reaches a decision.

He said: "It's been a huge learning curve for our society."