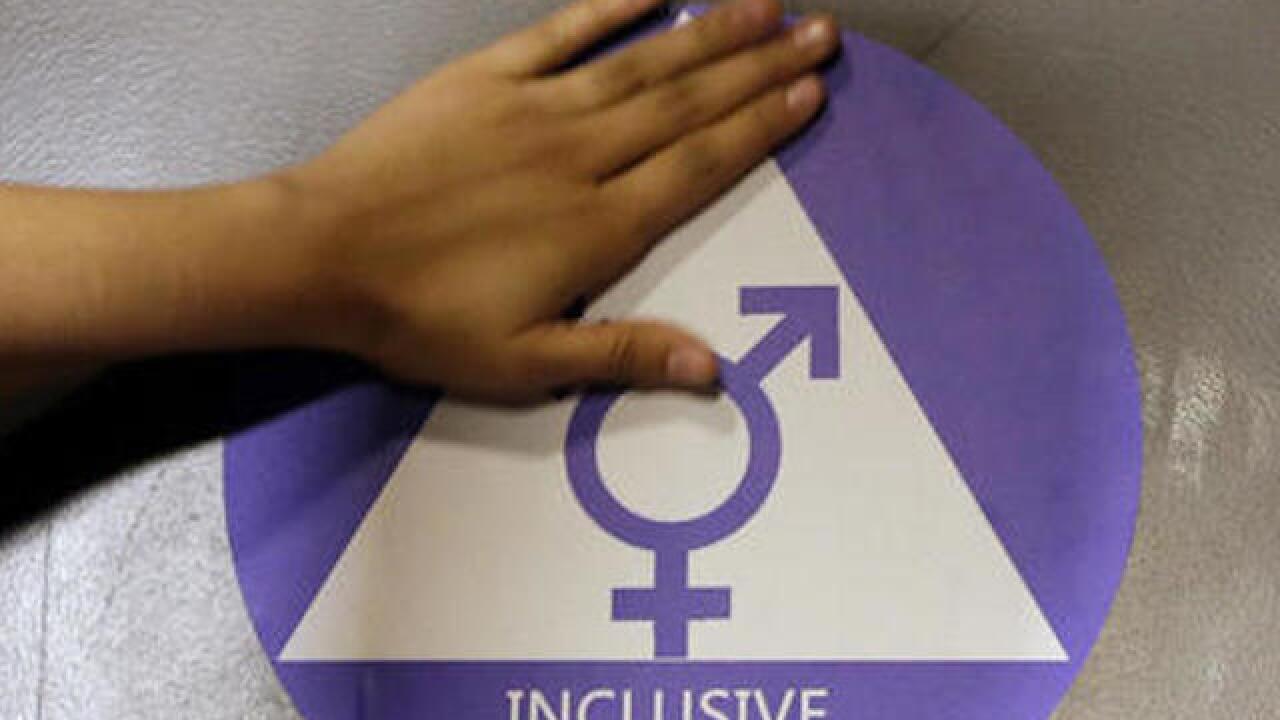 Copyright Associated Press
Elaine Thompson
<p>HOLD FOR STORY FILE - In this May 17, 2016 file photo, a new sticker is placed on the door at the ceremonial opening of a gender neutral bathroom at Nathan Hale High School in Seattle. Hundreds of parents across the country have called on President Donald Trump to embrace Obama-era protections for transgender students that call for letting them use school bathrooms in accordance with their gender identity. </p>

The announcement is a significant victory for opponents of the Obama administration's guidelines who believe the federal government should never have gotten involved in the issue. Civil rights groups, meanwhile, decried the move as an attack on transgender children that denies them equal rights.

Last May, the departments of Education and Justice issued joint guidance directing schools to let transgender students use facilities that correspond with their gender identity. The "Dear Colleague" letter, addressed to school districts and colleges that receive federal funding, was based on the Obama administration's interpretation of Title IX, the federal law that bans sex discrimination in schools, to include gender identity.

In a two-page "Dear Colleague" letter to public schools, the Trump administration said the existing guidance did not "contain extensive legal analysis or explain how the position is consistent with the express language of Title IX, nor did they undergo any formal public process."

The letter -- which does not offer new guidance but simply withdraws the Obama administration policy -- says there must be "due regard" for the role of states and local school districts in shaping education policy in schools.

The letter also makes clear that the "withdrawal of these guidance documents does not leave students without protections from discrimination, bullying, or harassment."

"As President Trump has clearly stated, he believes policy regarding transgender bathrooms should be decided at the state level," the White House said in a statement. "The joint decision made today by the Department of Justice and the Department of Education returning power to the states paves the way for an open and inclusive process to take place at the local level with input from parents, students, teachers and administrators."

Education Secretary Betsy DeVos said the administration has "a responsibility to protect every student in America and ensure that they have the freedom to learn and thrive in a safe and trusted environment.

"This is not merely a federal mandate, but a moral obligation no individual, school, district or state can abdicate," the statement continued. "At my direction, the department's Office for Civil Rights remains committed to investigating all claims of discrimination, bullying and harassment against those who are most vulnerable in our schools."

DeVos, however, was not originally on board with the plan, a source told CNN Wednesday.

In a separate letter, the deputy solicitor general informed the Supreme Court that the guidance had been withdrawn. The court is poised to consider the case of Gavin Grimm, a 17-year-old transgender male who wants to use the bathroom that corresponds to his gender identity.

Last April, a federal appeals court ruled in favor of Grimm, a Virginia resident, who fought the school board's new policy at Gloucester High School that denied him access to the boys' bathroom but allowed him the use of recently constructed single-stall unisex restrooms. In ruling for Grimm and against the school district, the court deferred to the Obama administration's interpretation of Title IX.

In an interview with CNN last fall, Grimm said that he was just "another 17-year-old kid."

"I have 17-year-old fears and worries and I have 17-year-old motivations, which is just to get out of high school and have fun with my friends and family. There's just nothing about me that is predatory or dangerous, or warrants the kind of response I got from the community," he said.

Arguments in the case are scheduled for March 28. While the Trump administration's new guidance may not stop the case, it could give the justices an off-ramp to send the matter back to the lower court to consider the new guidance. The court could also decide to send the case back before arguments.

"Both parties will tell the court we think the court to decide the question," said James Esseks,the director of the ACLU's Lesbian Gay Bisexual and HIV Project and a lawyer for Grimm.

'Not what Betsy wanted to do'

One source outside of government who said he's familiar with DeVos' thinking on the plans told CNN, "this is not what Betsy wanted to do."

She communicated that first to Attorney General Jeff Sessions, the source said. She was then summoned to the White House on Tuesday for a meeting with Sessions and President Donald Trump, where she was told to agree to the plans.

"It was the President's decision," the source said.

DeVos reminded Trump that both he and she had publicly promised to protect all students.

She felt that this was not in accordance with those promises. She did ask for additional language to put in the letter that affirmed that students would still be protected and the Department of Education's Office of Civil Rights would investigate issues.

Her concern was that some people may interpret it as removing protections.

"When the President tells you to do something you don't want to do, that is a hard spot to be in," the source said.

The Obama administration guidance was in response to questions from school districts about how to treat transgender students, based on best practices from schools across the country that have already taken up the issue.

"A school may not require transgender students to use facilities inconsistent with their gender identity," the guidance read.

That guidance outraged Texas Attorney General Ken Paxton, who led a charge on behalf of several states and won a nationwide injunction from a district court judge in Texas barring federal agencies from taking action against the schools that disagreed with the guidance.

Sarah Warbelow, legal director of Human Rights Campaign, said rescinding the guidance will lead to confusion among schools that look to the federal government for best practices, because the change does not affect existing federal law, only the Department of Education's interpretation of it.

And Mara Keisling, the executive director of the National Center for Transgender Equality, told reporters the decision was "simply and dangerously wrong and incorrect."

"Laws like Title IX are not state-by-state options, they are the responsibility of the federal government," she said.