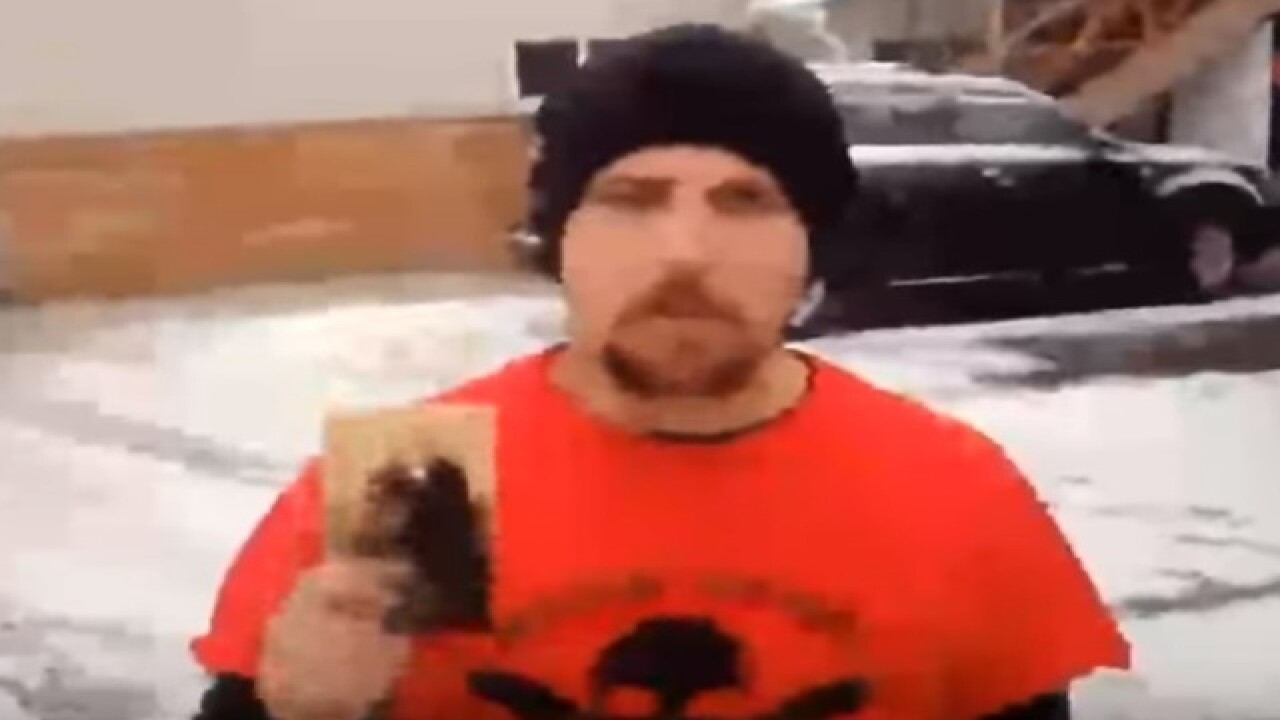 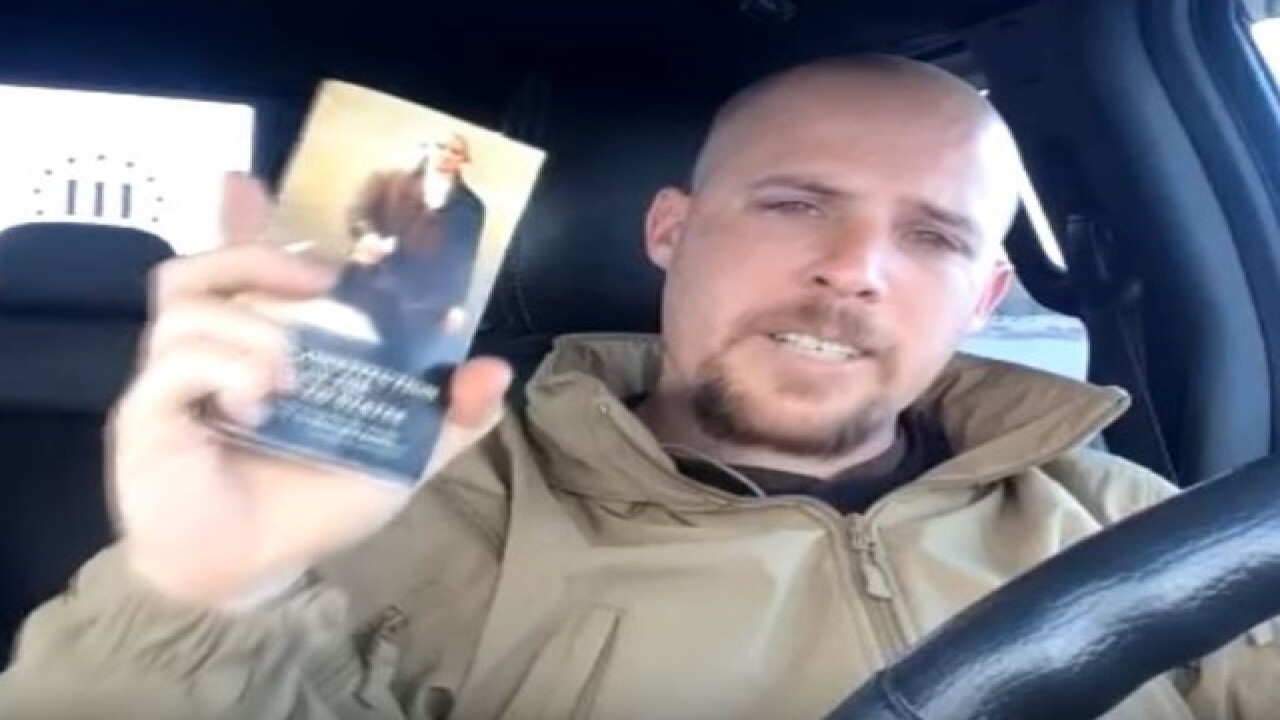 The remote high desert of eastern Oregon became the latest flashpoint for anti-government sentiment as armed protesters occupied a national wildlife refuge to object to a prison sentence for local ranchers for burning federal land.
Videos have surfaced online of Jon Ritzheimer, a local man who has organized and led various armed rallies against Islam and the Muslim community in the Valley, who appears to be in Oregon supporting the group of protesters.
In one video posted online, Ritzheimer is seen holding a copy of the constitution saying, "We need to stand our ground together, if we don't stand our ground together, that's when he fall."
In the video he says, "Tyranny becomes law, rebellion becomes duty, don't forget that people."
In reference to how the group got into the headquarters of the Malheur National Wildlife Refuge building, it appear he said, "We went there, it was completely open and blank, we just rolled right in with an RV, a trailer, everything's peaceful."

In a second video, Ritzheimer appears in the driver's seat of a car talking about the situation asking the following question: "What other choice do we have than to stand?"
He goes on to criticize the federal government and the "kids go off to college, get their degree, kids that have never had their hands dirty, and now they get these jobs at the BLM, and now they're going to tell these ranchers, these people who are more in tune with the ground and with the earth out here, they're going to come out here and tell them how to run their show, how to ranch, how many head of cattle they can have, where they can go where they can't go on their own damn land?"
Towards the end of the video, he says to his family tearfully, "I love you, and no matter what happens...just know I stood for something, don't let it be in vain."
Ammon Bundy -- the son of Nevada rancher Cliven Bundy, who was involved in a 2014 standoff with the government over grazing rights -- is among the people at the headquarters. It was unclear exactly how many people were taking part in the protests.
Ammon Bundy posted a video on his Facebook page asking for militia members to come help him. He said "this is not a time to stand down. It's a time to stand up and come to Harney County," where Burns is located.
Bundy and other militia members came to Burns last month, a small town about 280 miles southeast of Portland, Oregon. They were upset over the looming prison sentences for local ranchers Dwight and Steven Hammond. They went to the wildlife refuge Saturday evening following a peaceful rally in Burns to support the ranchers.
Dwight Hammond, 73, and Steven Hammond, 46, said they lit the fires on federal land in 2001 and 2006 to reduce the growth of invasive plants and protect their property from wildfires.
The two were convicted of the arsons three years ago and served time -- the father three months, the son one year. But a federal judge ruled in October that their terms were too short under U.S. minimum sentencing law and ordered them back to prison for about four years each.
The decision generated controversy and is part of a decades-long dispute between some Westerners and the federal government over the use of public lands. The issue traces back to the 1970s and the "Sagebrush Rebellion," a move by Western states like Nevada to increase local control over federal land. Critics of the push for more local control have said the federal government should administer the public lands for the widest possible uses, including environmental and recreation.
In an interview with The Associated Press at the wildlife refuge Sunday, Ryan Bundy, Ammon Bundy's brother, said the protesters' ultimate goal is to turn the land over to local authorities so people can use it free of federal oversight.
They want to "restore the rights to people so they can use the land and resources" for ranching, logging, mining and recreation.
Ryan Bundy says the federal government has been "tromping on people's rights and privileges and properties and livelihoods."
"I understand the land needs to be used wisely, but that's what we as stewards need to do. A rancher is going to take care of his own ranch," Ryan Bundy said.
On Sunday, supplies were seen being delivered to the refuge area, which is remote even by rural Oregon standards.
Dwight Hammond has said he and his son plan to peacefully report to prison Monday as ordered by the judge.
Harney County Sheriff Dave Ward said the group of armed protesters came to town under false pretenses.
"These men came to Harney County claiming to be part of militia groups supporting local ranchers, when in reality these men had alternative motives to attempt to over throw the county and federal government in hopes to spark a movement across the United States," Ward said in a statement on Sunday afternoon.
The sheriff says he is working with local and federal authorities to keep the citizens in his county safe and to resolve the situation as quickly and peacefully as possible.
He is asking people to stay away from the Malheur National Wildlife Refuge for their own safety. He said he does not think any other parts of the county are in immediate danger.
Beth Anne Steele, an FBI spokeswoman in Portland, said Saturday that the agency was aware of the situation at the national wildlife refuge. She made no further comment.
U.S. Sen. Ron Wyden, who had been briefed by the FBI agent in charge in Portland, Oregon, said most local residents do not support the protesters.
"The overwhelming majority of people there very much want to get on with their lives without this disruption and are not in sympathy with a bunch of outsiders," Wyden told AP.
Local residents have expressed fear of potential of violence. A peaceful rally Saturday in support of the Hammonds featured speeches, flags and marching.
As marchers reached the courthouse, they tossed hundreds of pennies at the locked door. Their message: Civilians were buying back their government. After the march passed, two girls swooped in to scavenge the pennies.
A few blocks away, Hammond and his wife, Susan, greeted marchers, who planted flower bouquets in the snow.
Scripps Only Content 2015