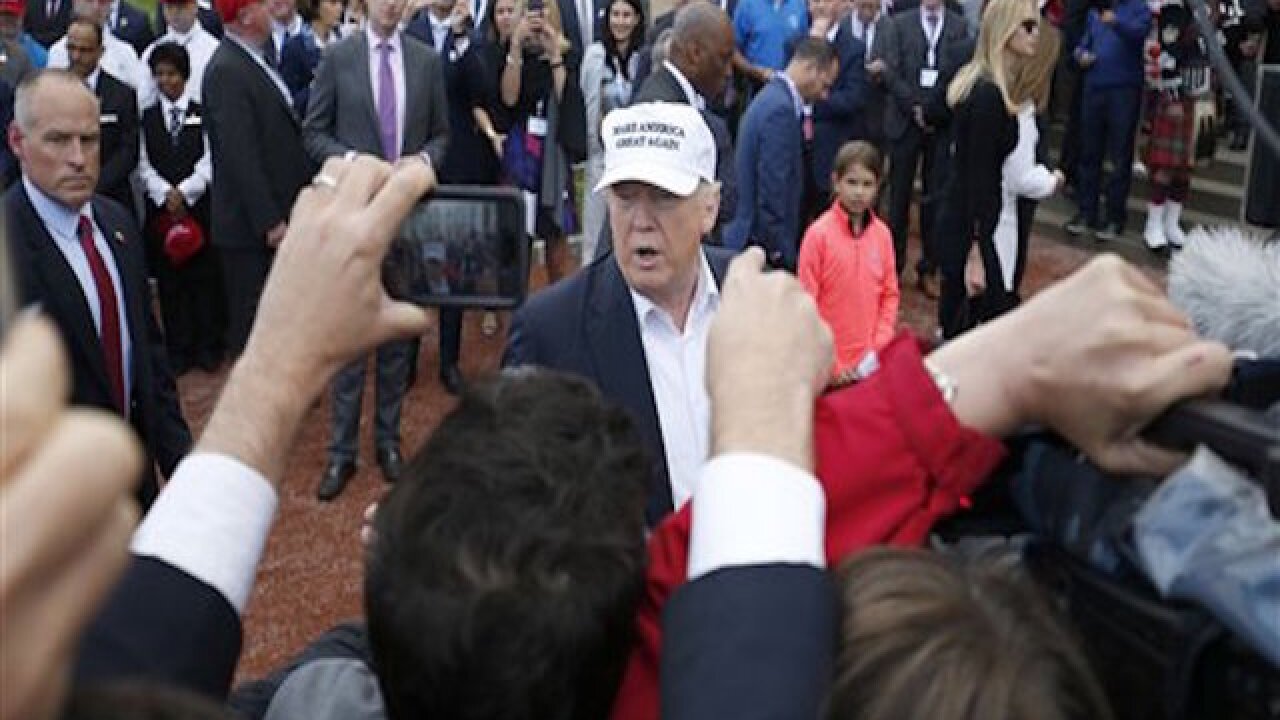 AYRSHIRE, Scotland (AP) — Donald Trump, in a visit to Scotland on Friday, hailed Britain's vote to leave the European Union, drawing parallels to the anger driving his own presidential campaign.

"I love to see people take their country back," he told reporters at a news conference at one of his golf courses in Scotland. "And that's really what's happening in the United States" and other parts of the world.

The campaign leading to Thursday's stunning vote for Britain to leave the European Union shared some of the populist themes driving the Trump campaign, including a wariness of immigration, concern about borders and skepticism of the value of multinational organizations.

"People want to see borders. They don't necessarily want people pouring into their country that they don't know who they are and where they come from," Trump said.

Trump, whose visit to Scotland is his first international trip since sealing sufficient delegate support to be the GOP standardbearer this fall, also predicted that other nations will follow the United Kingdom's lead.

"This will not be the last," he said earlier at a ceremony to mark the reopening of a golf resort he owns on Scotland's west coast. "They're angry about many, many things."

In a statement released by his campaign, Trump linked the vote to his own White House bid, declaring that "come November, the American people will have a chance to re-declare their independence."

Trump, who called the vote "historic" and "a great thing," said earlier this week that he hadn't closely followed the so-called Brexit vote but he had come out in support of the "Leave" movement.

At the new conference, he described British Prime Minister David Cameron as "a good man" who was wrong on the Brexit issue. "He didn't get the mood of his country right."

Cameron had advocated for Britain to stay in the EU and announced earlier Friday that he would step down by this fall. The referendum to leave, which passed with nearly 52% of the vote, immediately rattled the rest of Europe, sending markets plunging.

Trump's reason for his trip to Europe wasn't politics, but rather to check on a pair of championship-level golf resorts he owns in Scotland. Trump, who unlike previous presidential candidates did not schedule any political meetings while abroad, spent Friday morning marking the $200 million-plus rehabilitation of the famed Turnberry golf resort nestled on the rocky coast facing the North Atlantic Ocean.

Trump arrived at Turnberry, which has hosted four British Opens and was used an as Air Force base during both world wars, on a helicopter and then toured the grounds. He is slated to hold a press conference later on the green of the 9th hole.

Trump, whose mother was born in Scotland, has long emphasized his ties to the country, but he has waged several battles with those in his ancestral homeland. Earlier this year, he was stripped of an honorary degree from Robert Gordon University in Aberdeen.

Trump was initially welcomed by Scottish leaders. But relationships soured as arguments ensued over a nearby wind farm and the levels of investment promised. Trump feared the wind farm would block the view from his course. He claimed he had received assurances that it would not be built. Trump denounced a leading Scottish politician, Alex Salmond, as "an embarrassment to Scotland."

Trump also faced opposition from environmental groups concerned about development on Aberdeen's famed dunes, and some local people refused to make way for the development.

Trump's Scotland sojourn sparked worries from some Republicans at home in the United States who believe the trip was poorly timed. It comes as Trump has slipped in the polls and just days after he dismissed his campaign manager, Corey Lewandowski, and reported having just $1.3 million in cash on hand at the start of June, more than $41 million behind presumptive Democratic nominee Hillary Clinton.

Trump's son, Eric, who oversaw the work at Turnberry, dismissed talk that the family's business was distracting his father, saying "the eyes of the world" will be on Trump.