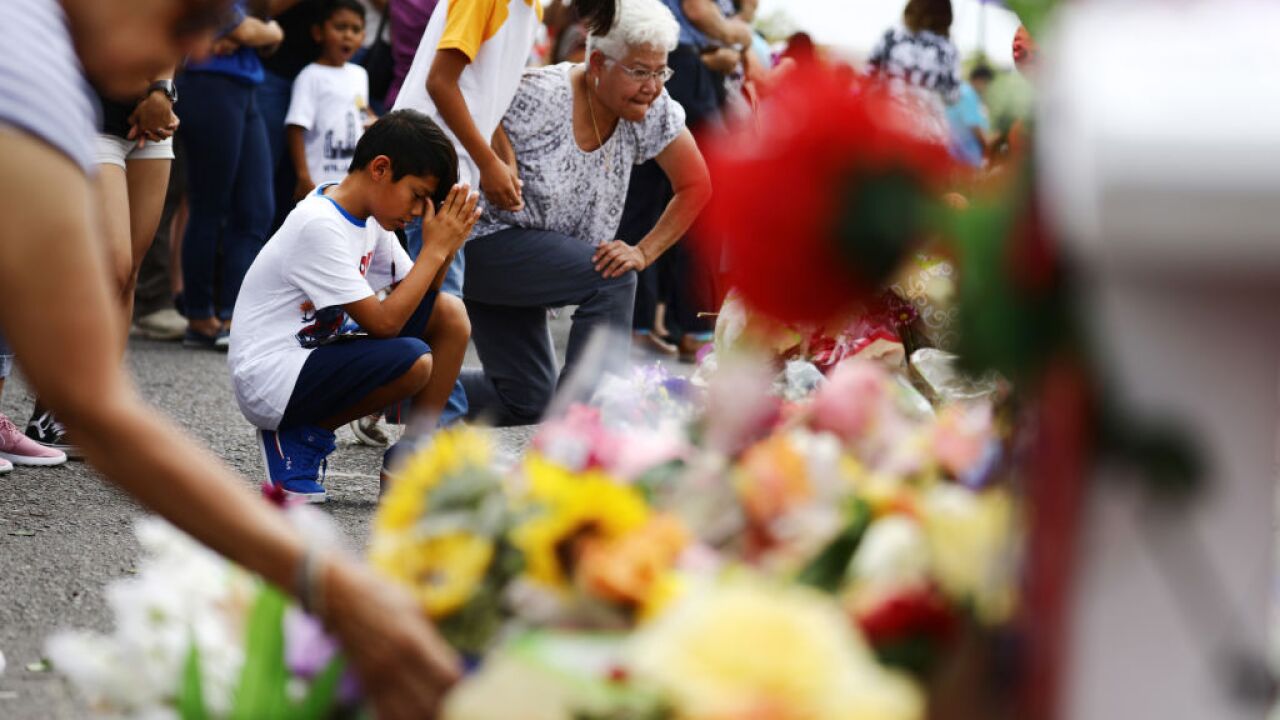 President Donald Trump is traveling Wednesday to the scenes of back-to-back mass shootings that stunned the nation and left at least 31 people dead, but his appearances in Ohio and Texas aren't being well received by all local officials -- some of whom say it would be best if the commander in chief avoided their grief-stricken cities.

Trump landed in Dayton, Ohio, on Wednesday morning and is speaking to those wounded and their families at Miami Valley Hospital. Trump will travel to El Paso, Texas, in the afternoon.

But aides said they expected Trump to visit with some combination of first responders, medical personnel and victims' families when he makes brief stops in each city alongside first lady Melania Trump. On visits to sites of tragedy, the President often makes impromptu remarks, a scenario aides haven't ruled out for his Wednesday stops.

The question his critics have is whether he will comfort their cities in mourning or deepen the divisions.

Trump has at most moments of his presidency appeared more focused on driving a divisive political message than acting as a unifier. While he has expressed intense interest in appearing "presidential," including through the military trappings of the job, he has not eagerly adopted the tone his predecessors have used from the Oval Office or other official settings.

The exceptions have usually come after national tragedies, when Trump has dutifully delivered straight-to-camera remarks from a teleprompter and visited with grieving families. But oftentimes the President returns to the same type of aggressive language in the hours and days afterward.

This time, Trump has appeared sensitive to accusations he is racist or that his past language -- including references to an "invasion" of undocumented immigrants -- could have contributed to the attack in El Paso, whose perpetrator used similar language in a manifesto.

A line in Trump's Monday speech condemning white supremacy was added by his staff at the last minute, a person familiar with it said.

White House press secretary Stephanie Grisham denied this. She said, "At the direction of the President, condemning white supremacy was in every draft of the speech. I would challenge whoever says otherwise to have the courage to go on the record with their lies."

But Trump quickly returned to picking partisan fights over the shooting. On Twitter Tuesday night, he mocked former Rep. Beto O'Rourke -- who has blamed Trump's rhetoric as a motivator behind the El Paso shooting and called on him to not visit the city -- for going by "Beto" rather than "Robert," calling it a "phony name to indicate Hispanic heritage."

And on Wednesday morning, he referenced a Twitter account that appeared to belong to the Dayton shooter that retweeted messages supporting Sens. Bernie Sanders and Elizabeth Warren, suggesting that left-wing politics played a role in the massacre. The FBI, however, has not suggested a political motivation in Dayton.

But the contents of Trump's address -- which included no calls for expanding background checks or taking other major steps to restrict access to firearms -- did not satisfy some of the local officials the President will encounter on Wednesday.

Democratic Dayton Mayor Nan Whaley said Tuesday that she planned to meet with Trump when he travels there midday Wednesday. But she previewed a pointed message for her face-to-face with the President.

"His rhetoric has been painful for many in the community," Whaley said. She said his remarks from the White House on Monday "fell really short."

"He mentioned gun issues like one time," she said. "I don't know if he knows what he believes, frankly."

He is facing similar resistance ahead of his visit to El Paso -- a city still awaiting a $500,000 payment from his campaign for services provided during a February campaign rally.

Still, the city's mayor said he would meet with Trump to discuss his community's needs.

"This is not a political visit," Republican Mayor Dee Margo said. "He is President of the United States. So in that capacity, I will fulfill my obligations as mayor of El Paso and hope that if we are expressing specifics that we can get him to come through for us."

Resistance to Trump's habit of jetting quickly to the scene of disaster isn't new. After a gunman entered the hallways and opened fired on a school in Parkland, Florida, murdering 17 people, several students urged Trump to stay away because they were still processing their grief. Funerals in Pittsburgh had just begun for the 11 shot dead in the Tree of Life synagogue when the mayor refused to meet with Trump during his visit there. Protests could be heard in the distance as he laid stones and flowers on memorial stars.

The White House has downplayed concerns about Trump's stops on Wednesday.

"The President's the President of all the people," spokesman Hogan Gidley told reporters at the White House on Tuesday. "What he wants to do is go to these communities and grieve with them, pray with them, offer condolences and, quite frankly, offer thank you and appreciation to those who are first responders and put their lives on the line and are able to take out the shooter so quickly."

Grisham also said Trump's focus will be on comforting victims, survivors and their loved ones.

"Tomorrow will be about honoring victims, comforting communities, and thanking first responders & medical professionals for their heroic actions. President @realDonaldTrump is a true leader doing what's right for this nation," she tweeted.

A test for comforter in chief

Still, at the White House there has been an acknowledgment that Trump's tone and demeanor are scrutinized during his visits to the scene of tragedy. That includes by many Republicans, who have lamented the President's seeming inability to strike a unifying tone for more than a few days after moments of national crisis, including in the aftermath of white nationalist violence in Charlottesville, Virginia, and a devastating hurricane in Puerto Rico.

Among Trump's aides, there is a tacit acknowledgment that he does not view national unity as a driving mission in the way past presidents have sought to bring the country together.

Privately Trump has a sense of urgency about his desire to fulfill his job as comforter in chief. After Parkland, Secret Service agents advised White House staff to wait an additional day before scheduling the President's visit so they could prepare properly. Trump pushed back on the delay -- forcefully telling top aides to inform the Secret Service that he would be flying to Florida the next day.

During visits like that one, though, Trump has sometimes struggled to convey his empathy.

"I can't say I was consoled or helped," Marjory Stoneman Douglas High School senior Samantha Fuentes said after meeting with Trump following the shooting at the Florida school. In that session, Trump spoke about the shooter being a "sick puppy" and used the phrase "oh, boy" about eight times, said Fuentes, who was wounded in both legs.

That echoed accusations leveled by Myeshia Johnson, the widow of slain US soldier Sgt. La David Johnson, who said Trump stumbled on her husband's name during a condolence call and suggested the only reason he knew it was because the report was right in front of him.

At the same time, other victims and survivors have described Trump as engaging in his conversations and willing to spent long stretches with grieving family members confronting dark moments. When Trump gathered students and parents from the Parkland shooting at the White House, he held a piece of White House stationery with five discussion points written on it in black marker.

The visible points included prompts such as "1. What would you most want me to know about your experience?" "2. What can we do to help you feel safe?" and "5. I hear you."