In the letter, Principal Timothy M. Grivois-Shah says the school has identified all students who are believed to have been involved, and are asking for parents and students with concerns to come forward with relevant information.

Here's a copy of the letter that families received: 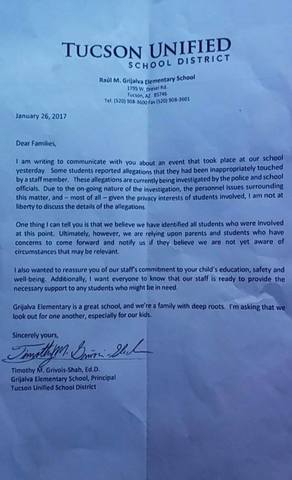 TUSD provided the following statement on the incident:

Sgt. Pete Dugan, a spokesman for the Tucson Police Department said they are investigating allegations of inappropriate conduct between a teacher and students.

Dugan said no one has been arrested nor detained at this time.

Stay with KGUN9 and KGUN9.com for updates on this developing story.