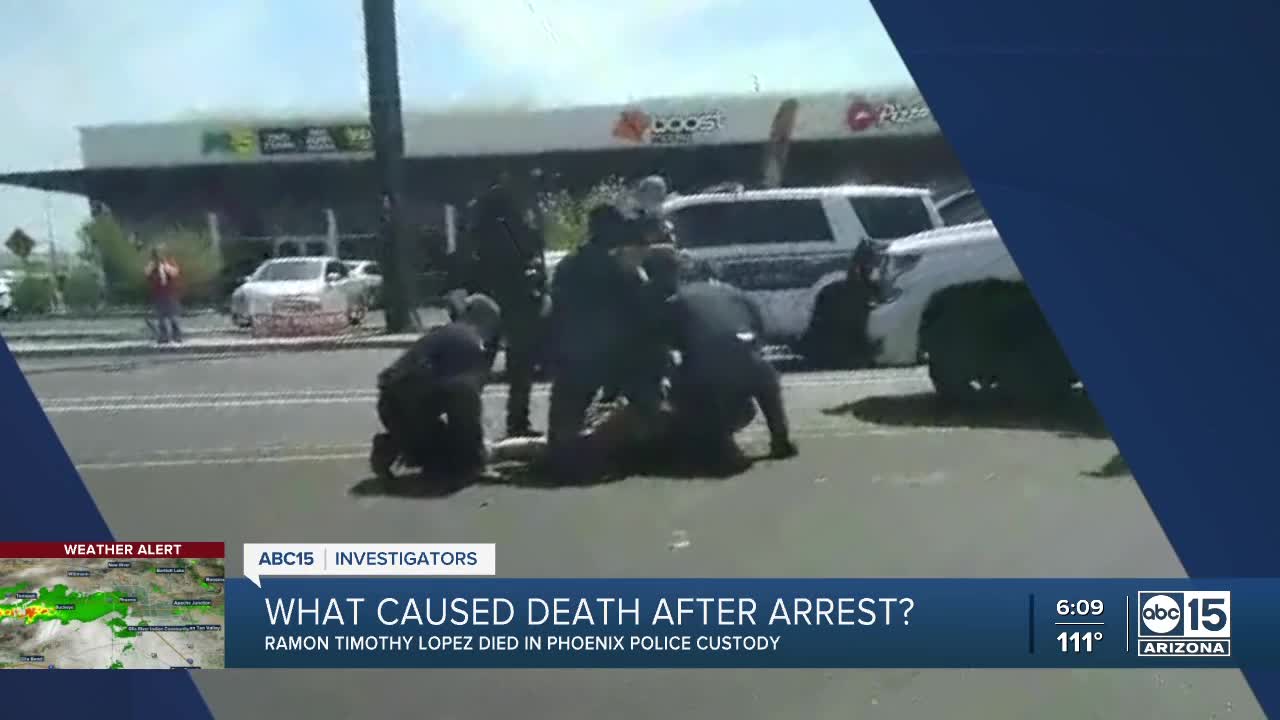 Ramon Timothy Lopez was the father of two children, including a newborn baby. Ramon had been diagnosed with paranoid schizophrenia, according to his girlfriend. He worked as a truck driver, and he lived less than a mile from where he encountered police on August 4.

The witness, who captured about 20 seconds of cell phone video, said she stopped with other traffic as an officer chased Ramon back-and-forth across 51st Avenue near Indian School Road at about 10:30 a.m. that day. The woman, who also lives in the Maryvale neighborhood, asked ABC15 not to use her name. She felt the first officer was overly aggressive toward Ramon.

"[I] felt he was using a lot of force to slam his body into the ground," the woman said. "The gentleman seems like he was still struggling, but at that point, it seemed like he just didn’t want his face smashed on the asphalt. It was super hot.”

Minutes earlier, police were dispatched to a report of a man looking into car windows in a nearby parking lot. Phoenix police say Ramon saw the officer approaching him when he ran into a liquor store, threw a drink at the officer, and ran away into the road.

"The officer was by himself and when he grabbed hold of Ramon, they both fell onto the hot asphalt and both could have been struck by vehicles on 51st Avenue," Sgt. Mercedes Fortune said in an email to ABC15.

Once other officers arrived, "Ramon refused to cooperate and continued to kick and pull away from officers," Fortune added.

The witness video, from the moving car, showed one officer holding Ramon's feet to the ground. A second officer appeared to kneel on Ramon's back and a third officer was crouching near his upper body. It's unclear whether he was also on top of Ramon.

"He did have his left knee in the midst of his back and shoulders," the witness said. "[The officer] had [Ramon's] arms pressed against the tops of his shoulders and his legs were actually on his hand, so at that point, [Ramon] was restrained, and [the officer] was still put in quite a bit of force."

Ramon appeared to be holding his head off the pavement, but he was not moving otherwise. Police said they found no drugs or weapons on Ramon.

Police say they put Ramon in the back of a police car before he became unresponsive. He was taken to the hospital and pronounced dead.

"Officers did not place their knee(s) on Ramon's neck and at no time was his airway obstructed," Fortune said. She added that Ramon was laying on the roadway for a minimal amount of time.

Asphalt on a 100-degree morning in Phoenix can become hot enough to cause serious burns on human skin.

Fortune also said it would be "highly irresponsible" to assume the cause of death. According to the Maricopa County Medical Examiner website, the autopsy results are still pending.

The witness who spoke to ABC15 said she also called the Phoenix Police Department to report concerns about what she saw. She said a sergeant returned her call.

"He let me know he reviewed the body cam and didn't see anything that I was reporting," she said. "At that point, he couldn't really help me with anything, and it wasn’t, you know, his department."

She's still hoping for answers and closure for Ramon's family and her entire neighborhood.

"I’m supposed to depend on these police officers to protect us, and when I see situations like this, it’s just hard to know where to put the trust at this point," she said.

Phoenix police tell ABC15 they will release their bodycam video of the arrest and in-custody death next week.