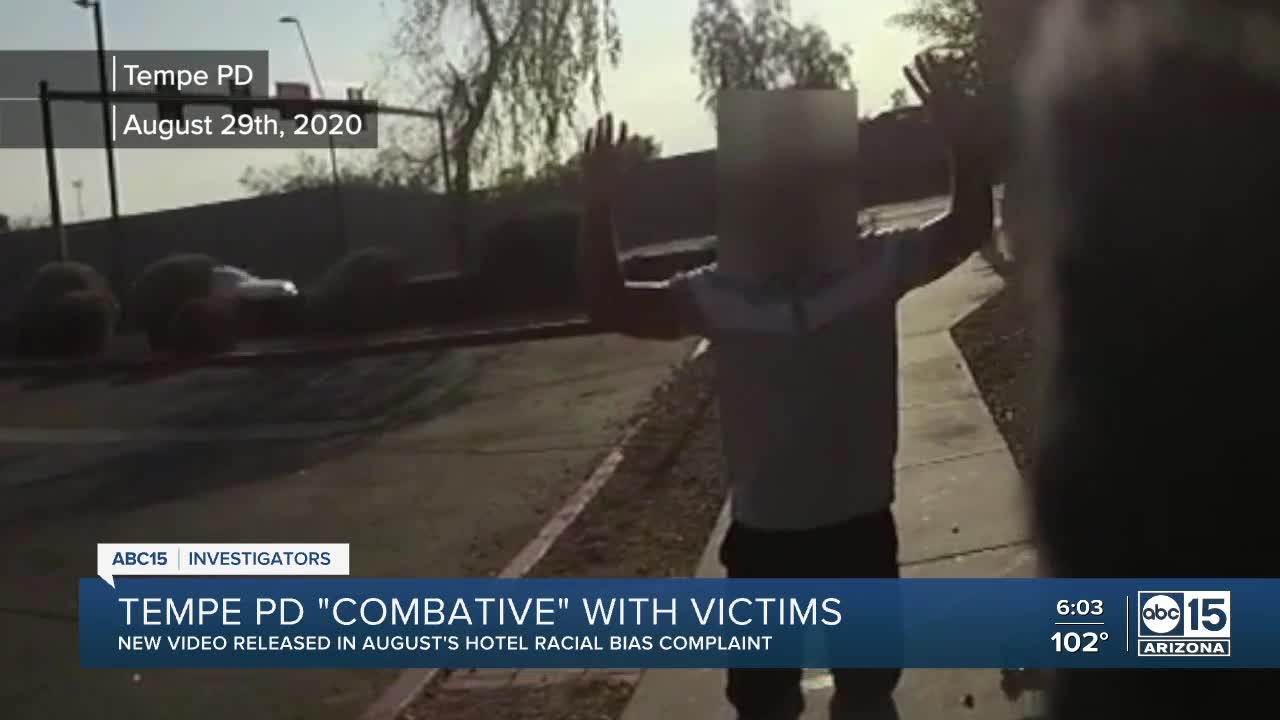 Tempe police officers and supervisors were verbally combative with a Tempe hotel employee and his manager who wanted to complain about racial bias.

TEMPE, AZ — Tempe police officers and supervisors were verbally combative with a Tempe hotel employee and his manager who wanted to complain about racial bias.

Hawthorn Suites employee Tre Cumpian and manager Shawn Hoover had called police to the hotel after they say a white guy confronted for smoking in a stairway pulled a gun on them, according to police body-worn camera video of the August 29 incident.

The first responder, Officer Ronald Kerzaya, took the description of a white man with a black shirt and tan pants. A minute later, when Officer Kerzaya saw Tre, a black man in a light-colored shirt and black pants, he said Tre "matched the description" and held him at gunpoint several minutes.

Additional police body-cam video released to ABC15 Wednesday showed other Tempe police personnel responding to Cumpian's and Hoover's nearly immediate complaints that Officer Kerzaya had acted extremely unprofessional and that the gunman was allowed to get away, while Kerzaya held an innocent Black man at gunpoint.

Tempe police blurred every frame of the video released this week, so the identities of some of the officers and supervisors on the scene are not clear. The Tempe police personnel seem to, at first, ignore or minimize the hotel employees' concerns about police treatment.

In one video, an unidentified police sergeant responds to Hoover's request for a commander by saying, "I am the sergeant. I am the supervisor you are going to get."

"I want someone higher," Hoover responds.

"No," the sergeant replies.

One lieutenant does listen to their entire complaint and explains the internal investigation process, and he apologizes to Cumpian for what he experienced. That same lieutenant later refused to provide Hoover's request to speak to a commander. The second supervisor who tried to refuse to escalate the victims' complaint to a higher level of management.

In the end, an on-call commander was contacted, according to a Tempe police spokeswoman. That commander responded to the situation the next day, according to Tempe police, including reporting the situation to the Professional Standards Bureau. The spokeswoman said all of the officers and supervisors involved in the hotel investigation are included in the police administrative investigation.

A lawyer for Cumpian told ABC15 what Tempe police did that day was unprofessional, an attempt at a cover-up, and she said it demonstrates the cultural problem at the Tempe Police Department.