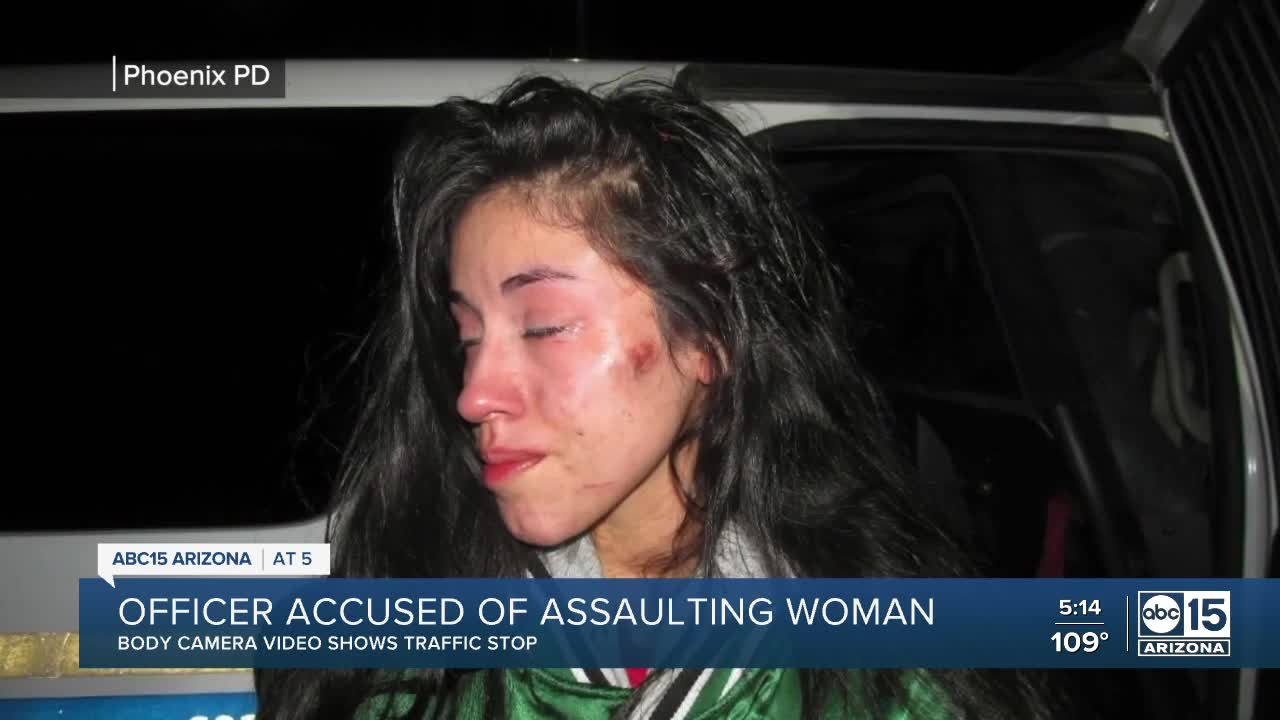 Body camera video shows incident where a Phoenix officer has been accused of assaulting a woman during an arrest.

PHOENIX — A Valley woman has filed a legal claim saying a Phoenix officer manhandled her during a January traffic stop, which left her physically and emotionally scarred.

For several seconds he asks for her identification, which she said she didn't have, and she repeatedly asked why the officer stopped her. Things appear calm until the officer pulls out handcuffs and tells her to put her hands behind her back. The video is hard to make out as McGillis quickly forces Valenzuela to the ground and eventually handcuffs her. Valenzuela is screaming, and she is later is photographed with cuts, scrapes, and bruises from her scalp to her legs.

After she is handcuffed, McGillis later pushes Valenzuela against the side of the car and asks why she doesn't "act like a young lady." She tells him, "You tackled me for no reason." Valenzuela is approximately 5-feet tall and weighs less than 100 pounds.

According to the video, McGillis initially noticed Valenzuela veering with her car across the center line around 11:50 p.m. after leaving a bar's parking lot. She was originally charged with resisting arrest and DUI. She also received several traffic citations.

"I can't even fathom it," said Valenzuela's attorney Brian Foster. "The chutzpah to charge her with resisting arrest after she was physically assaulted and brutalized by this officer defies any comprehension."

Foster filed notices of claim, precursors to lawsuits, against both the City of Phoenix and Maricopa County this week. The claims contain several allegations, including civil rights violations and malicious prosecution.

The Maricopa County Attorney's spokeswoman said the resisting arrest charge would be dropped. One DUI charge in Phoenix Municipal Court has also been dropped, but Valenzuela still faces other violations cited by the officer.

The Phoenix Police Department tells ABC15 that McGillis acted within policy and had cause to arrest Valenzuela.

A Phoenix police spokeswoman emailed the following statement about the arrest:

On January 17, 2020, just before midnight Officer McGillis, who was assigned as a DUI motor officer was patrolling the area of 7th Avenue and Indian School Road when he observed a vehicle driving on the wrong side of the road, in an opposing traffic lane. Officer McGillis attempted to stop the driver for the violation.