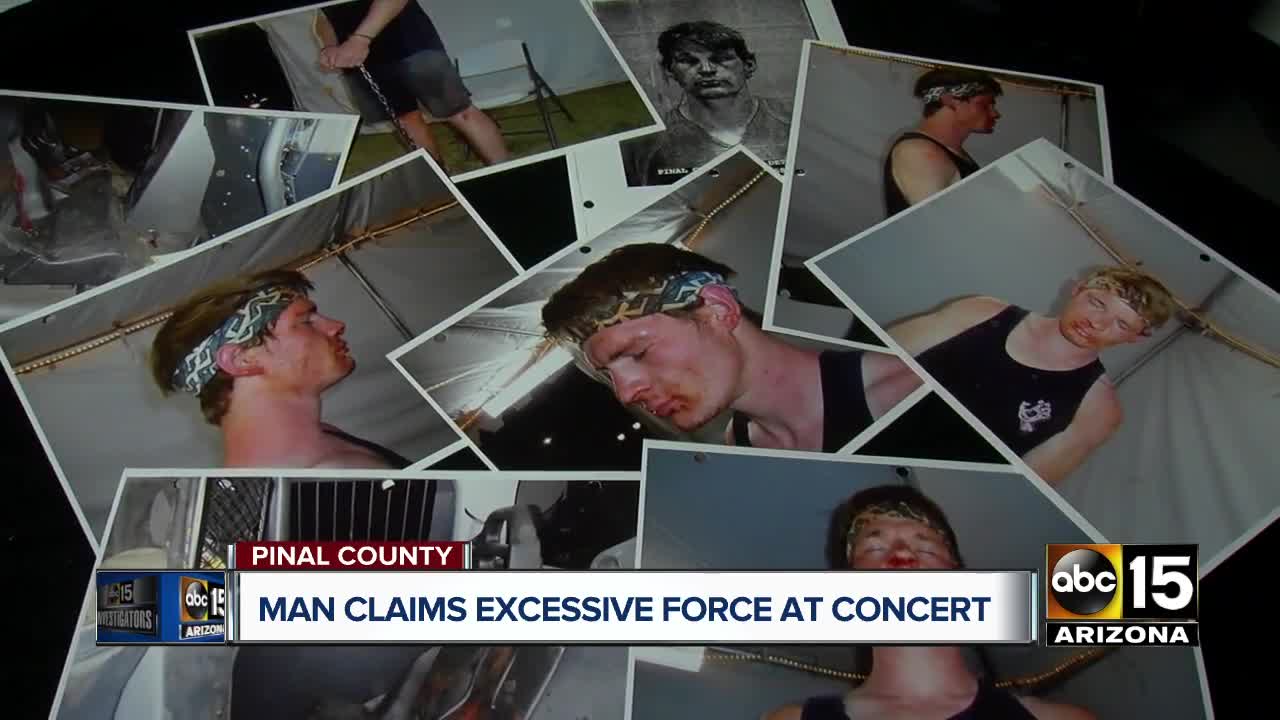 Mason Jones, 20, has filed a notice of claim--a precursor to a lawsuit--against the county asking for $2 million in damages. Jones said the deputies violated his First Amendment right to free speech and falsely arrested him. According to the claim, Jones also received an "unjustified and brutal beating," and deputies "falsely reported the events in order to cover their criminal activity and to exact revenge."

"I want other officers to think twice before they go out again and let their frustrations out on an individual," Jones said.

Jones, who was 19 at the time of his arrest, admitted he was drunk and yelled insults at the deputies who were patrolling the campground for Country Thunder. The annual music festival is held near Florence.

"I remember asking them, 'Why, why, why am I going to jail?'" Jones said in an interview with the ABC15 Investigators. Jones said his insults were "stupid," but he also said he as a constitutional right to insult government employees.

Deputy Travis Carter wrote in the incident report he planned to trespass Jones - remove him from the festival venue - for disorderly conduct.

A friend of Jones' captured cell phone video of some of the interaction between Carter and Jones. It shows the deputy pulling a handcuffed Jones to a standing position and walking him to a PCSO SUV. Deputy Carter then turns Jones and pushes him hard into the back fender and holds his neck while shoving him into the backseat.

A second deputy repeatedly tells Jones' friends to back up. At one point, the deputy rams his body into the young man who was recording.

According to Deputy Carter's report, "Mason turned in his seat and violently kicked the door back open." Carter goes on to say Jones kicked him in the knees and groin, and even wedged his foot between the roof and the door of the car at one point.

The friend's video does not show the door being kicked open. It only records Jones' feet dangling back out of the vehicle for two seconds before Deputy Carter leans his body into the backseat.

On the video, someone yells, "Yo! Yo! They are beating the [expletive] out of him in the car." Jones, who remained handcuffed, appeared to be fully inside the backseat.

"They put me in the backseat with handcuffs on and beat me unconscious," Jones said. "I have permanent eye damage." Jones denied kicking the deputy or fighting with him in any way.

"Once you're in handcuffs, I think the game is over," said Chris Jones, Mason's dad.

In the sheriff's report, Deputy Carter wrote he hit Jones three times in the face. A second deputy pepper-sprayed the teen. PCSO evidence photos show Jones' face was bruised and swollen. The backseat of the SUV was covered in blood, as was the deputy's uniform from head to toe.

Jones said deputies did not wipe the pepper spray off his face and did not seek appropriate medical attention in a timely manner. The incident report indicated a medic did evaluate Jones at the festival site. After his release from jail, Jones went to the hospital and he said he was diagnosed with a severe concussion and eye damage.

Other law enforcement officers also took Jones' two friends into custody, knocking down the phone that was recording them and dislocating one friend's shoulder. As a result, they did not get full video of the punching and pepper-spraying incident. The deputies did not have body cameras, and they did not provide ABC15 with any additional video to corroborate the deputies' version of events. The sheriff's report did include a handful of Facebook posts from alleged witnesses who defended the deputies.

The sheriff's office's use of force policies do not specifically address when punches to the face are allowed. The policy does state, "Given that no policy can realistically predict every possible situation a deputy might encounter, deputies are entrusted to use well-reasoned discretion in determining the appropriate use of force in each incident."

In November, the ABC15 Investigators asked for internal investigations on Deputy Carter including for Jones' arrest; however, those records have not been provided. After the airing of our initial report, a spokeswoman for the Pinal County Sheriff's Office said there was no internal investigation into Jones' arrest "because this use of force was approved." When a deputy uses force, they submit a Response to Resistance report, according to PCSO policy. That report is reviewed by the chain of command. PCSO only opens an internal affairs investigation if the actions are a violation of policies, were potentially not justified, or if there was a complaint filed.

Deputy Carter's disciplinary records and annual performance reviews were released. He was once suspended for going in uniform and on duty to collect belongings from an ex-girlfriend's home. In his 11 years at PCSO, Carter also received written reprimands for not wearing a seat belt during a crash in his patrol car, failing to show up to training, and failing to document a home invasion.

Carter was also one of six deputies named in a 2012 lawsuit about an unconstitutional search at a family's home. The lawsuit ended in a settlement.

"We are not anti-police," Chris Jones said. "It just scares me that this guy is out every day with a gun because I don't think he has a temperament to be doing that job."

Mason Jones originally faced multiple felony charges including aggravated assault on a police officer. Jones agreed to a plea deal for misdemeanor resisting arrest, which resulted in no jail sentence.