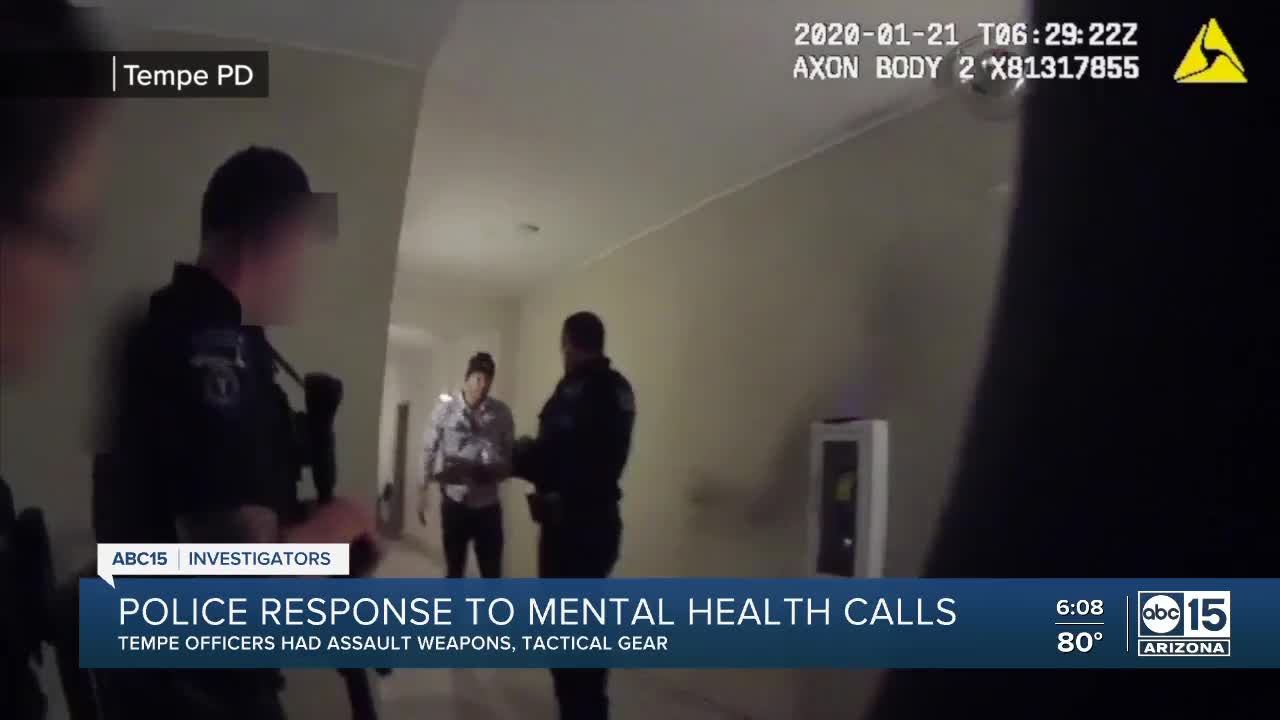 A Tempe mother is pushing for changes in how police respond to mental health crisis calls after officers showed up at her home with assault weapons.

TEMPE, AZ — A Tempe mother is pushing for changes in how police respond to mental health crisis calls after officers showed up at her home with assault weapons.

Adrienne Bryant called 911 on January 20, when her son, who has Schizoaffective disorder, was having a mental health crisis. She realizes how easily the situation could have taken a deadly turn like the police shooting of Walter Wallace, Jr., in Philadelphia Monday.

Bryant explained her son Randy Evans, 28, was irate after being put on a lower dose of medication. In the frantic call, the dispatcher gets Randy's name wrong and seems to get confirmation he had knives. As a result, responding officers arrive with AR-15 rifles, tactical gear, tasers, and a K-9.

Tempe Police body-worn camera video shows officers told Bryant they were "here to help." She responded, "You're not helping with a gun."

Bryant tried to give the officers background on Randy, but they tell her they already have it. They tell her and her younger child to go downstairs away from their apartment, and at least one officer threatens to arrest Bryant if she doesn't comply.

The officers repeatedly called for "Raymond" to come out of the apartment as they continued to have the name wrong.

The officers later admitted to the family they had Randy mistaken for another black man with a similar name who had a warrant for his arrest. They also believed he had a knife and was a danger to himself and others based on the 911 call. The misunderstandings upped the officers' perceived threat level.

"There are risks that are involved when they respond to any and every call," Bryant said, "but when there are family members that are there to be able to say something is wrong, to be able to validate, and confirm the information - and to be treated like I was a criminal that night - there has to be changes made."

A Tempe police spokesman said officers trained in mental health and crisis intervention and negotiation also went to Bryant's apartment that night. According to the department, the officers did nothing wrong and had to take action to protect the safety of everyone involved.

Bryant said she felt her family's struggle with mental illness is likely similar to the family of Walter Wallace, Jr., in Philadelphia. Monday, video from bystanders showed Wallace's mother chasing after her son, trying to intervene, just moments before police shoot him. Wallace had a knife, according to police. His family said he was in a mental health crisis due to medication changes, and they had tried to get police help earlier in the day.

Bryant wants social work teams to respond to crisis calls instead of, or in conjunction with, the police. Bryant said she tried a mental health clinic and a crisis line for help first. Calling 911 was her last resort.

"These are the challenges we are facing when people are dealing with manic episodes with their loved ones," Bryant said. "If I had not been there that night, things could’ve gone really wrong for my sons."

Eventually, Tempe officers figured out Evans' identity, realized no crime occurred, and transported him to a mental health treatment facility.

Since January, Bryant met with Tempe police officials and exchanged emails with other city leaders. She told the ABC15 Investigators people with mental illness deserve more dignity and respect.