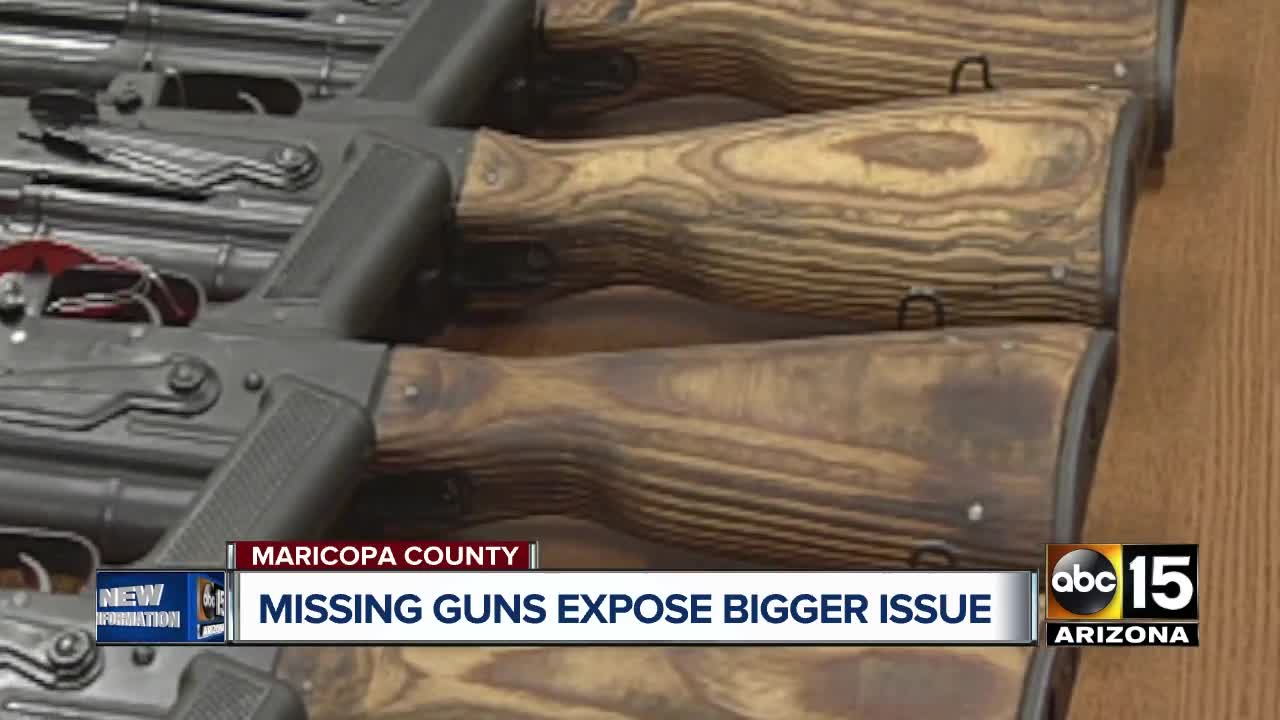 The missing guns from the Maricopa County Sheriff's Office may point to and expose a bigger issue. 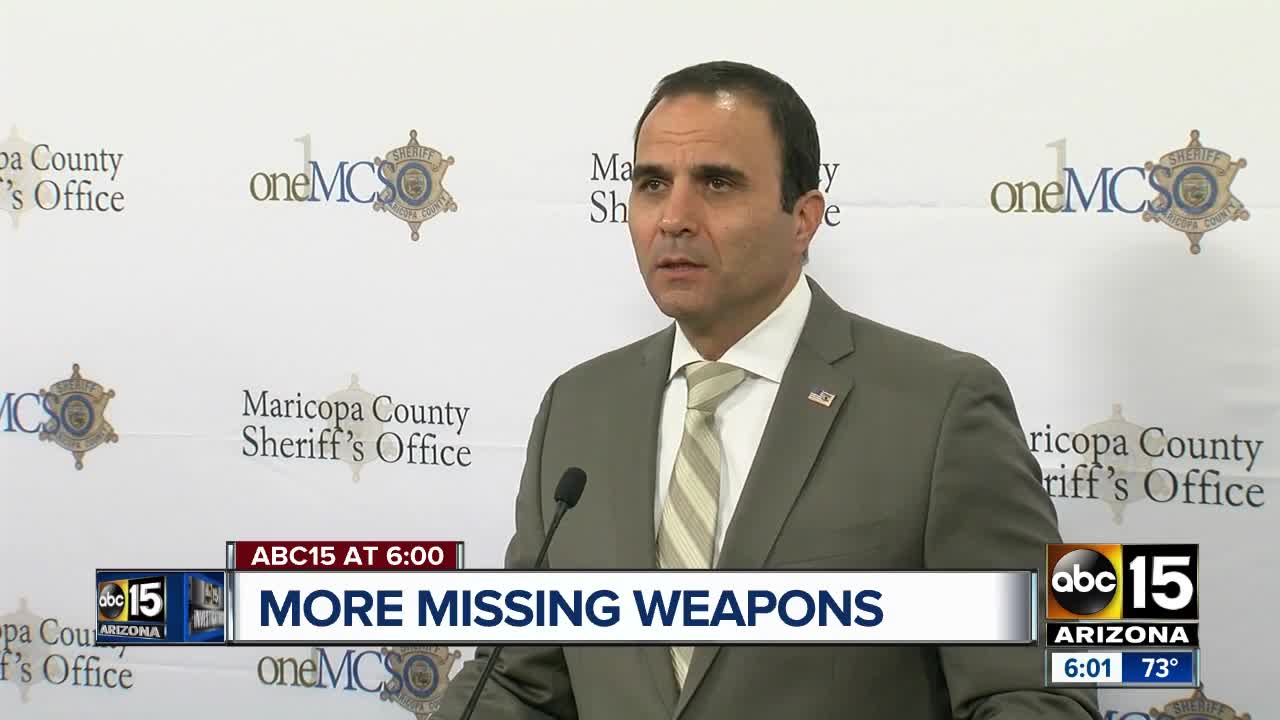 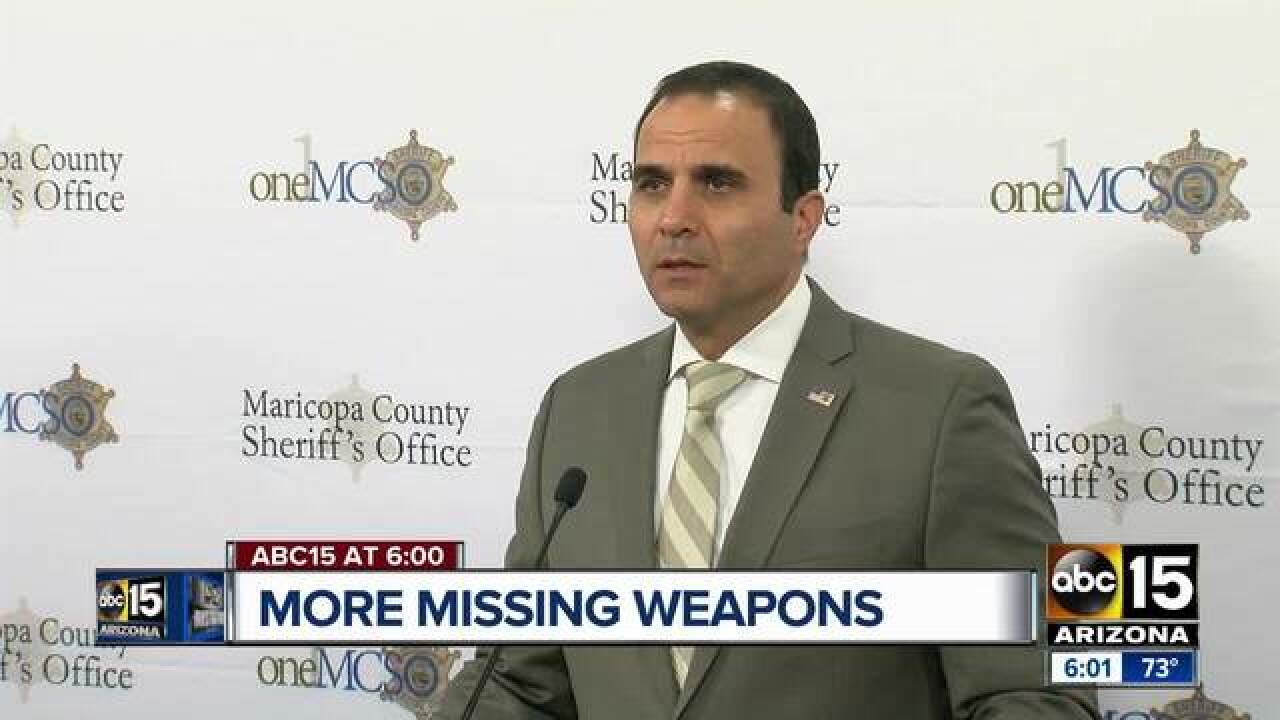 Sheriff Paul Penzone has ordered a new “complete audit” of his agency’s missing weapons after ABC15 discovered guns used by a suspect in a freeway shootout on Interstate 17 belonged to the county.

In a statement, the sheriff also issued a pair of corrections to comments he made at a Wednesday press conference.

READ THE FULL STATEMENT BELOW

The corrections are significant and appear to indicate that MCSO has more missing weapons than it previously realized and that his office may not have properly or formally notified federal officials about the unaccounted for guns, which includes some fully-automatic weapons.

MCSO officials did not answer follow-up questions regarding the statement.

“Any further information about this topic will be made public upon the conclusion of that investigation,” said an MCSO spokesperson regarding the new audit.

On Wednesday, the ABC15 Investigators learned that two weapons, including a fully-automatic rifle, were in possession of Arnaldo Caraveo, who led police on a pursuit and shootout during rush hour on the freeway.

After contacting MCSO for comment, the sheriff called a press conference and confirmed that was true.

Penzone also said that the guns were two of 29 unaccounted firearms that were identified in a 2016 audit.

However, in his new statement, the sheriff said one of the MCSO guns found with Caraveo was “unrevealed and not documented as previously believed.”

The sentence appears to mean the firearm was a gun the Sheriff’s Office didn’t know was missing and that there are more unaccounted firearms that MCSO isn’t aware of.

Penzone’s statement said a new “complete” audit will include photographic documentation of each weapon.

At his press conference, Penzone also said the 2016 audit was “turned over to ATF to ensure every weapon was logged into the system.”

The sheriff also walked back that statement Thursday.

“My staff communicated that the ATF was notified of the report, but the formal notification did not occur as described,” Penzone wrote.

It’s not clear if and when ATF was formally notified of the missing weapons and whether that is a requirement.

An ATF spokesperson did not respond to a message from ABC15 on Thursday.

He placed blame for the “significant failures” on his predecessor, Joe Arpaio, and said his office has instituted new controls on for firearms.

In a statement to ABC15, Arpaio said he "vaguely remember there were some weapons unaccounted for. I'm sure my staff looked into it and took whatever action necessary."

In an effort to ensure complete transparency I would like to correct two statements that were misrepresented during yesterday’s news conference. At the conclusion of the 2016 audit, 29 weapons were identified as missing/stolen. These weapons were documented and recorded in NCIC as stolen at that time. My staff communicated that the ATF was notified of the report, but the formal notification did not occur as described. The audit was completed in February of 2016 and made available for public review shortly thereafter.

Additionally, one of the two weapons recovered was unrevealed and not documented as previously believed. Therefore, I have ordered a second complete audit of all weapons, to include photographic documentation of each weapon. We will continue to work with our federal, state and local law enforcement partners to address these significant failures which occurred during the Arpaio administration. Our commitment is to ensure effective structure, accountability and oversight of the Maricopa County Sheriff’s Office.