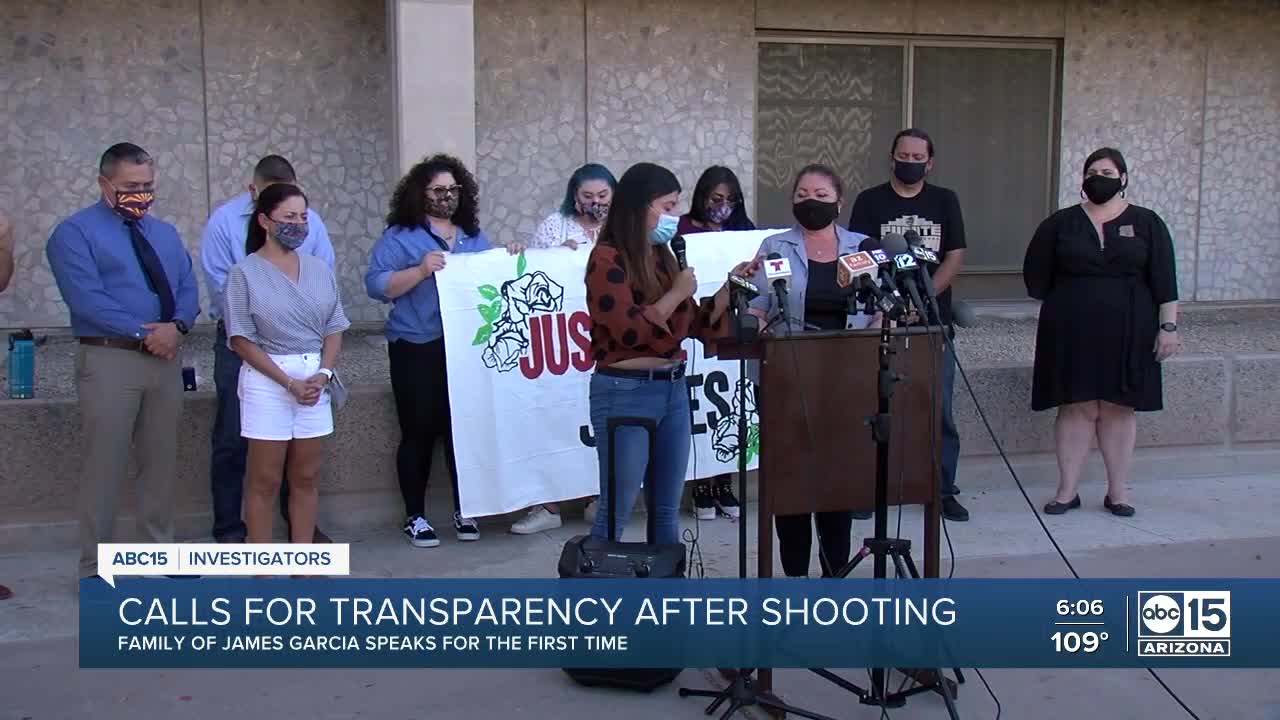 Family and community members gathered Wednesday to call for more transperency from Phoenix police after the death of James Garcia.

“He was quite a character,” said Denice Garcia, James’ mother, who is also a Cartwright School Board member. “He worked for Bank of America. He was an awesome young man. He would do things for other people without having to be asked.”

“We are tragically left to grieve without answers about why our loved ones were killed,” Denice Garcia said. “All of this is unacceptable. All victims of police brutality deserve answers.”

“We’re here echoing the demands of the family, which is for the police department to release every single body camera footage from every officer that was present on July 4,” said Viridiana Hernandez, Executive Director of Poder in Action.

Police looking for an aggravated assault suspect last Saturday found James Garcia in his car in the 5600 block of W. Glenrosa Ave. Officers say Garcia refused to speak to them for about 10 minutes, rolled up his car windows, and took out a gun. Officers said when Garcia pointed the gun, they opened fire.

Witnesses disputed the police story, saying Garcia was not the man officers were looking for. They also said Garcia had his hands on the steering wheel just before the shooting, although he did react when one office broke out his car window. A viral social media video captures part of the shooting.

The department has not released the names of the officers involved, but they did release video of an officer removing a gun from Garcia's car after the shooting to dispute social media claims he was unarmed. The FBI has been asked to investigate whether there were any civil rights violations.

Video from other shootings

Phoenix police have significantly delayed the release of police body camera video in some past officer-involved shootings. ABC15 waited two years to receive video from a May 2018 shooting in north Phoenix.

The family of Ryan Whitaker, who was shot by police during a May domestic violence call to his Ahwatukee apartment, have been asking for police to release video and information for nearly two months.

“You shot an innocent man in the back,” Ryan’s sister Katie Baeza said. “Prove us otherwise. Give us the information give my family peace some sort of closure.”Phoenix Police Chief Jeri Williams promised to speed up the timeline on release of all critical incident briefings, which include edited video, 911 call audio, dispatch recordings, and other information about police shootings. “We are now being forced to listen, and that’s not bad, that’s a good thing,” Williams said Monday.

ABC15 continues to press for answers about officer conduct when they use force against Arizonans. We emailed the following questions to Phoenix Police this week. Replies from Sgt. Mercedes Fortune appear italicized below:

1) Will you release all the Garcia body camera footage today, or this week?
"We are working on completing a more comprehensive CIB video which will include BWC from the involved employees. Our goal is to have it by the end of next week."

2) Sgt. Fortune mentioned in the video that releasing all the body camera would compromise the investigation. In what specific ways does the department believe releasing these records will jeopardize the investigation?
"If interviews have not been completed and witnesses view the video which would be public before their interviews then it could influence their statements or recollection of the events. Our priority is the integrity of the case and the facts surrounding the incident."

3) Can you please provide the officers' names who fired shots at Mr. Garcia? If you are not providing the names - why?
"The involved officers names will be shared which we normally do with critical incidents."

4) Can you please provide all reports pertaining to the Dion Johnson investigation? The name of the trooper, number of shots fired, time between shots and the ambulance arriving, etc. is all public information that we believe can/should be released if law enforcement has the information available.
"Please submit a public records request for the report."

5) What is the status of the body camera footage in the shooting death of Ryan Whitaker on May 21? Will that be released soon, now that the goal is 10-14 days?
"Sgt. Thompson is working on this."

In a later email, Fortune said the Whitaker video would be released soon. When asked about other unreleased police shooting videos, she replied “The Phoenix Police Department will not go back to create videos for older OIS's. The BWC [body-worn camera] for those older incidents should have been released already through a public records request.