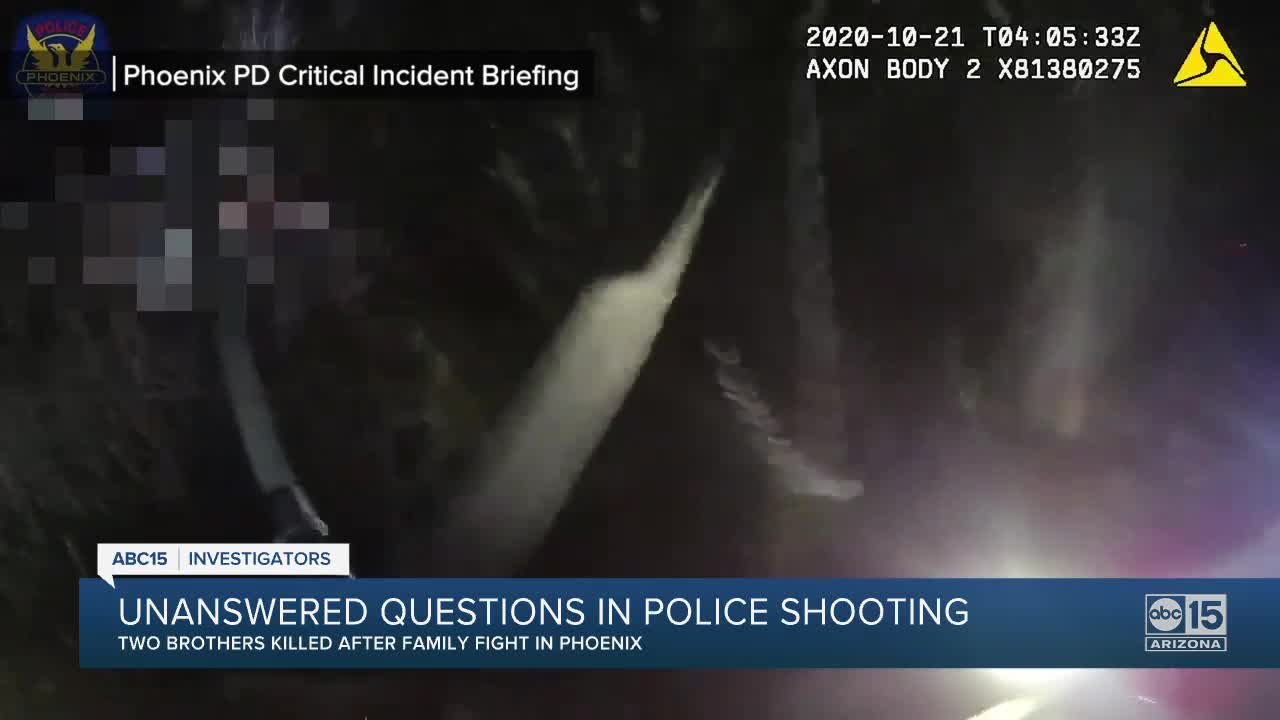 PHOENIX — Did a Phoenix Officer shoot an unarmed man in the back?

That's the still unanswered question after the fatal shooting of two brothers near the Biltmore area last month. The ABC15 Investigators reviewed hours of police body-worn camera video and hundreds of evidence photos from the October 20 shooting.

Two Phoenix police officers came to East Amelia Avenue, near 24th Street and Indian School Road for a welfare check on a senior citizen. Her two sons, George and Emmett Cocreham, were being mean and threatening.

"I’ve been trying to deal and live with it because I really didn’t feel it was your guys' problem," she told the first two arriving officers while standing outside the house.

"There is, at this point, no crime," one officer radioed to dispatch.

A short time later, an officer said one brother is near the window with what appears to be a gun. The situation became chaotic from sirens of approaching police cars, a helicopter circling, and multiple commands being yelled at the brothers.

The Cocreham brothers came and went from the backyard which is surrounded by a fence and bushes. Several officers were in the alley.

One officer was heard saying, "He's got a gun," but then he questioned whether it's being pointed.

Officer Adrian Juarez got on the hood of his police SUV for a better view. From his body cam, Emmett was seen pacing in the yard. Police later said he was unarmed at the time.

Moments later, the back door of the home swung open, and George raised what appears to be a rifle. Emmett took several quick steps toward his brother with his back to the officers in the alley.

In the video, at least six shots were heard. The first four appeared to come from Officer Juarez's gun. At that point, both brothers fell or dropped to the ground.

A second officer fired one shot. It's unclear where the final shot came from, but a Phoenix police spokeswoman said George did fire his rifle. No officers were hit. Noticeably absent from the spokeswoman's description was who shot whom.

Officer Juarez added to the confusion during a discussion with a supervisor minutes after the shooting.

"I aimed at the dude with the long gun," Juarez said.

A supervisor then asked if he shot the man lying on the ground, who was later identified as unarmed Emmett.

"I am not going to say I did or didn't, but I didn't aim at him," Juarez replied.

George, who disappeared inside the house, eventually crawled into officers' sight on the back porch. He was also bleeding.

Nearly 30 minutes after the shooting, officers finally approach both brothers to provide medical attention. Their efforts are too late. Emmett and George both died.

The day after the shooting, an uncle of the brothers told ABC15 that he did not blame the officers for their actions. The brothers had a history of family violence, and he said police had been previously called to the house.

The officers are facing both criminal and internal affairs investigations to determine whether their use of force was justified.