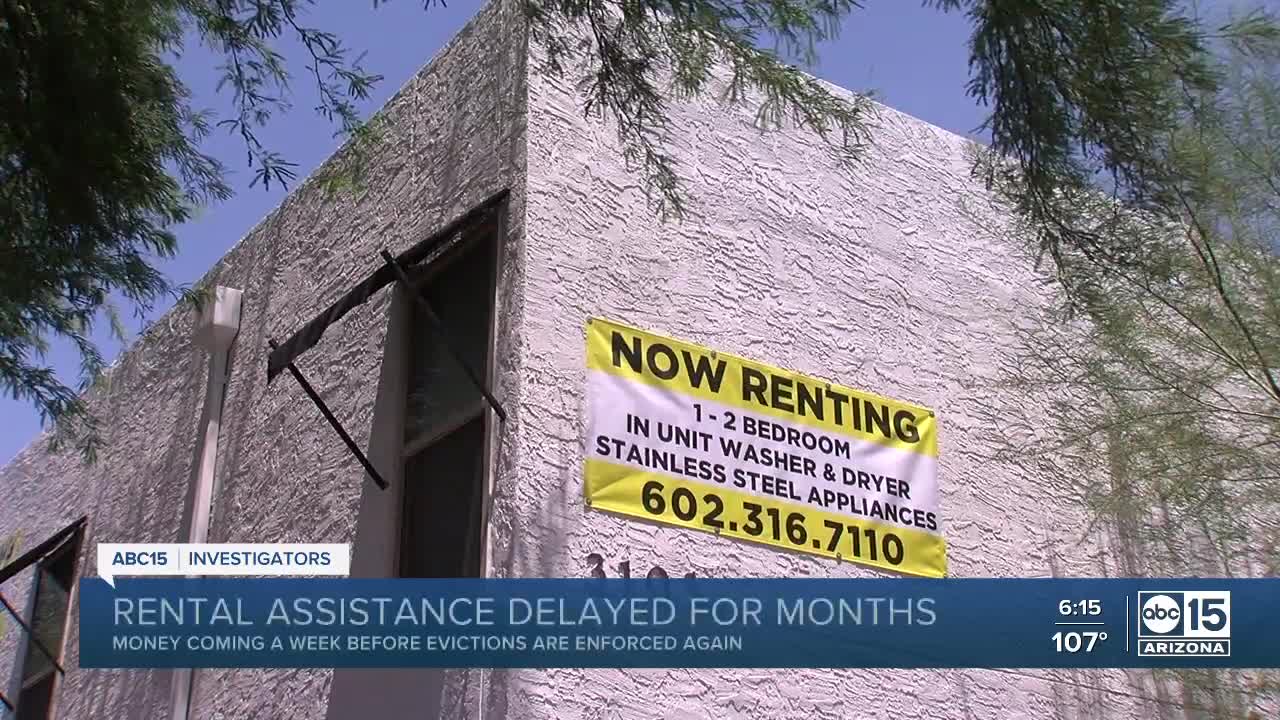 Rental assistance money has been delayed for months while people face potential evictions.

Arizona's largest city and county are rolling out their rental assistance programs to help those affected by coronavirus, more than three months after funding from the Federal CARES Act was allocated.

On Wednesday, Maricopa County announced it has begun accepting applications for rental assistance totaling $30 million. Households will be eligible for $1,500 per month for a total of three months. Payments will be made directly to landlords.

"The goal is to prevent or minimize any disruption of families in their household, any displacement or evictions," said Bruce Liggett, director of Maricopa County Human Services.

Twelve different agencies around the county are accepting and processing applications. While eligibility is income-based, the requirements are less than its typical assistance programs to get the funds out more quickly to a greater number of people. They estimate the funds will help 6,000 residents.

"Applications are going to be taken on and served on a first-come, first-serve basis. We're committed to doing this as quickly as possible," Liggett said.

The City of Phoenix has lowered the barrier to entry for applicants to its program.

Non-profit Wildfire was recently contracted by the City to coordinate the dispersing of $30 million in CARES Act funding for rental, mortgage and utility assistance.

"The City of Phoenix program is very, is pretty simple," said Cynthia Zwick, Executive Director of Wildfire. "It's asking only for proof of lawful presence (in Phoenix). And it's asking for proof and acknowledgment of negative financial impact due to COVID. That's it. Once those two items are verified, the individual is eligible and will receive the full portfolio of services that have been allocated."

"(They) do the interviews, take the applications, and then make the payments to either the utility company or the landlord."

Phoenicians who can show hardship due to COVID-19 can qualify for $3,300 for rent or mortgage assistance, $600 for gas and electric, and $300 toward their water bills.

"It's intended to cover about an average bill for about three months," Zwick said.

But the County and the City have had possession of the funds since the spring. ABC15 asked what caused the months-long delay in the programs.

County spokesman Fields Moseley said it was in charge of several COVID-19 responses, including homelessness and public health.

"Once it (the money) did arrive and we knew how much it was, there was a lot to consider," Moseley said.

He said the past six weeks have gone into planning how the program would be administered and getting staff and non-profits up to speed.

City of Phoenix spokesperson Tamra Ingersoll told ABC15 their delays had to do with finalizing contracts between the city and non-profits that will distribute the money.

Regardless of the reason for delays, Zwick says next week's expiration of Governor Ducey's executive order that postpones enforcement of eviction actions will not be enough time to get the money to the people who need it.

"This funding is just hitting the streets this week, essentially," Zwick said.

On July 9, Wildfire and other non-profits that focus on low-income Arizonans sent the Governor a letter asking him to extend the moratorium.

Other than an acknowledgment of receipt, Zwick says they have not heard back.

"We're simply seeking additional time in which to get the money to the folks who need it and the landlords who've been waiting for their rent," she said.