Cole Spencer claims one officer, with a history of complaints, acted "sadistically" 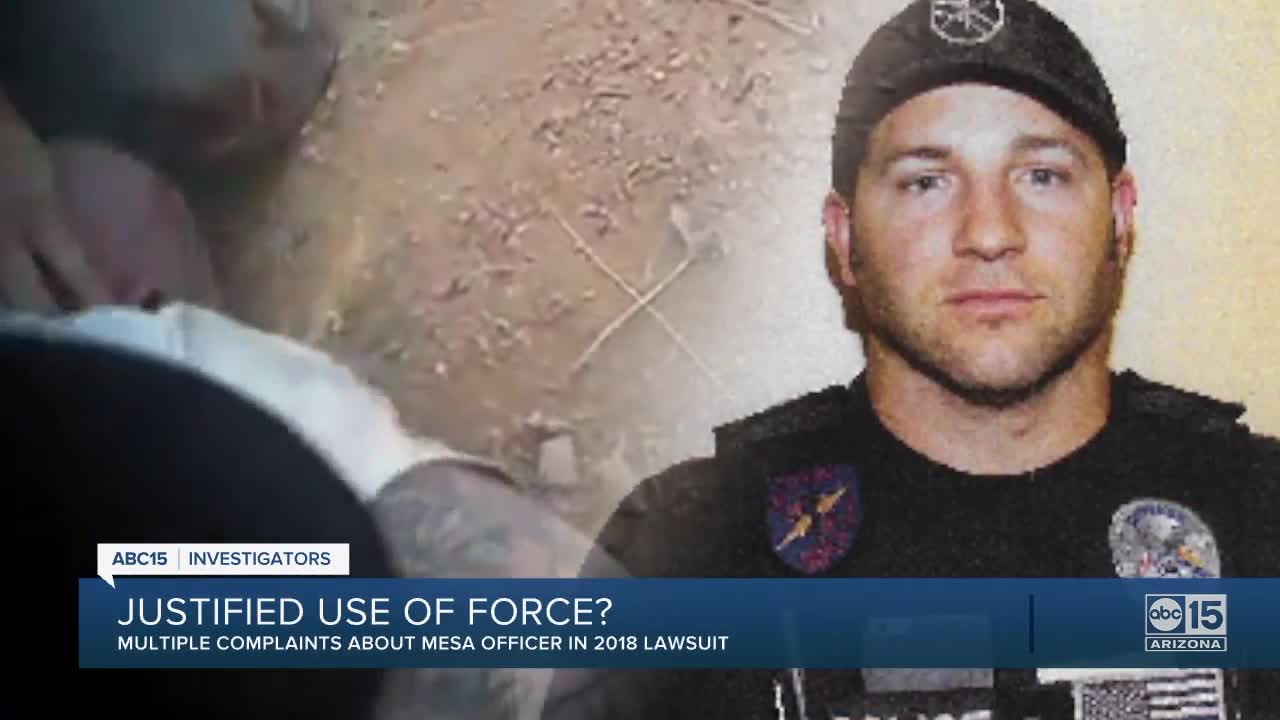 A Mesa police officer who pulled the trigger in the controversial bean bagging of a man with his hands up this summer is also being sued for alleged excessive force during a 2018 arrest.

MESA, AZ — A Mesa police officer who pulled the trigger in the controversial bean bagging of a man with his hands up this summer is also being sued for alleged excessive force during a 2018 arrest.

Mesa SWAT Officer Aaron Pew was one of three officers holding down Cole Spencer on March 21, 2018. Body-worn camera video showed Spencer lying face down as Pew kneed him in the head, smashed his face repeatedly into the ground, and wrapped both hands tightly around his neck.

"This guy Pew," Spencer said, "He sadistically inflicted all this onto me."

Another Mesa officer punched Spencer at least once in the stomach, and Taser deployment records show Spencer was stunned seven times for a total of 36 seconds.

Since 2013, Pew has been cleared in five separate claims of excessive force, including the July 2020 bean bagging of Lorenzo Jones, who had his hands up and his small children nearby.

In the 2018 case, Spencer had been a passenger in a car that two SWAT officers stopped for a minor traffic violation. According to the police report, Spencer was asked his name but gave a fake one. After that, Spencer was asked to step out of the car. When one officer tried to handcuff and arrest him, Spencer admitted to attempting to get away.

"I freaked out," Spencer told the ABC15 Investigators. "I shoved him with my shoulder."

There is no video of the traffic stop or the initial attempt at arrest because Mesa SWAT officers are not required to wear body cameras. The video obtained by ABC15 comes from Maricopa County Sheriff's deputy body cameras, and those officers arrived later as back-up.

According to the Mesa police report, Spencer displayed superhuman strength during a struggle with officers. It lasted three minutes before he was handcuffed.

Officers repeatedly told Spencer to put his hands behind his back. They also discussed how to handle him, although it's sometimes unclear which officer is speaking due to the video angle.

"You got some pepper spray?" one officer asked. "Put it right in his face."

Later an officer said, "Give him a ride again." The sound of a taser being deployed is heard for more than ten seconds.

Officer Pew explained how he wrapped his hands around Spencer's neck from the back, in an attempt to find his carotid artery. He squeezed "hoping Cole would go unconscious, so we could control him," according to the police report.

Spencer said between the beating, tasering, and choking, he was in-and-out of consciousness, suffered multiple broken bones in his face, and was blinded by blood. He also said he suffered periods of neuromuscular incapacitation due to the multiple taser deployments.

"I can’t even hear him I didn’t hear anything they were telling me," Spencer said. "I was just in survival mode."

At one point, the driver of the car is heard yelling at his friend, "They are going to kill you. Stop."

After handcuffing, officers continued to use force.

Spencer is heard saying," I can't breathe." One officer responded that Spencer could breathe, and Pew repositioned his knee on what appears to be Spencer's neck area. Pew went on to say, "What part of shut up don't you understand?"

Spencer spent three days in the hospital. He does not have a violent criminal history. He previously served prison time for burglaries. He was high on drugs the day of the beating. He's in prison now after accepting a plea deal involving burglaries and the aggravated assault on an officer charge from this arrest.

"I deserve to be here; I stole something that wasn’t mine," Spencer said.

From prison, Spencer filed a federal lawsuit claiming excessive force against Officer Pew, the other officers involved, Mesa, and the Maricopa County Sheriff's Office. He is representing himself as he reads up on civil rights law from his cell in Yuma.

Spencer provided the ABC15 Investigators with documents he obtained through discovery in the lawsuit. They include a history of complaints and internal affairs investigations involving Pew. The officer, with nearly nine years of experience at Mesa Police, had seven citizen complaints. Five were for excessive or unnecessary force. One was for bias-based policing and discourtesy. One was for failing to follow policy when deploying bean bag rounds at a dog.

Internal affairs investigations by the Mesa Police Department found Pew violated policy for the dog case, but he was exonerated or otherwise cleared in the other 6 complaints. A Mesa police spokeswoman, Irene Mahoney, declined to do an interview with ABC15 or discuss the cases in detail. She referred the ABC15 Investigators back to documents of the internal affairs cases.

Mahoney wrote Pew was in "good standing," and "it is expected that an officer who is actively working in the field will be the subject of complaints." She reiterated Cole Spencer's complaint about excessive force was not sustained.

In court documents, lawyers for both Mesa officers involved argue their serious physical force used to detain Cole was reasonable because these were not "normal" circumstances. "Cole was high on mind-altering drugs and physically fighting to avoid being arrested for a serious crime," according to Mesa's Motion for Summary Judgment.

Policing experts say officers who are being assaulted would have wide latitude in their responding level of force, with some considerations.

"Police departments know when their officers use any kind of force it comes under scrutiny," said Kevin Robinson, a retired Phoenix assistant police chief and criminal justice instructor at Arizona State University. "Whatever you decide to do, based on whatever the circumstances are, people are going to look at it, and they’re going to judge."

The legal standard in whether an act is "excessive force" is based on what a reasonable officer would do under the circumstances. Spencer told the ABC15 investigators the officers' actions were far from reasonable, and he wants Officer Pew to be fired.