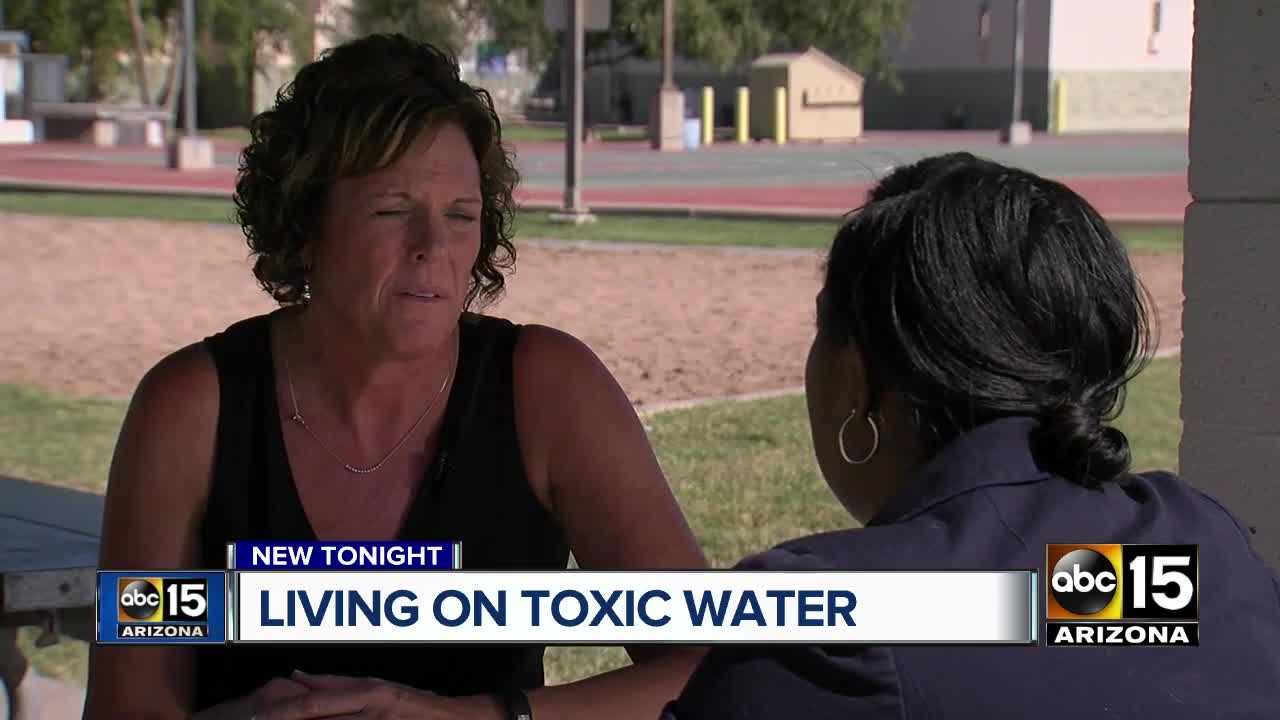 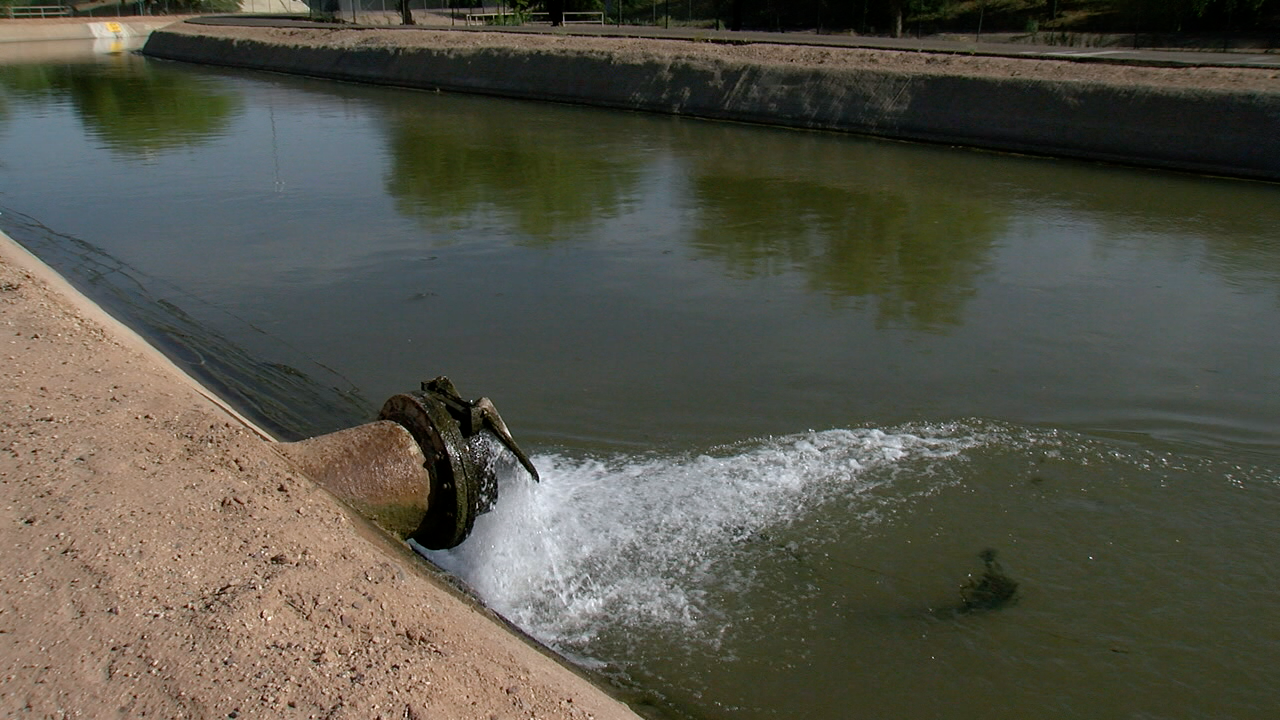 On a day in late October, Rena Chase Dufault had a full afternoon, trying to finish all of her errands in time to get situated for a phone call she had been waiting a year to have.

The Environmental Protection Agency (EPA) scheduled its annual conference call and webinar about the toxic water beneath the east Phoenix house her parents built in 1956.

Groundwater in an eight-mile stretch -- Palm Lane to the north, 52nd Street to the east, Buckeye Road to the south, and 7th Avenue to the west -- is contaminated with trichloroethylene, more commonly called TCE. The chemical, which is known to cause cancer and raises the risks of heart defects in babies during pregnancy, can turn into a gas and seep into buildings.

Take a look at the map below to see where toxic waste locations deemed NPL Superfund sites are located in Maricopa County, per Arizona Department of Environmental Quality.

Chase Dufault's home backs up to the plant that used to house Motorola, one of the companies responsible for dumping or leaking TCE into the ground from the 1950s until 1980s.

Since the 1990s, she has been actively involved in cleanup discussions and decisions with the EPA, state agencies, city agencies, and companies that have contributed to the pollution.

"All parties concerned were really working hard to identify and help us clean the situation up with the contamination and it didn't matter what neighborhood it was in," she said.

But since 2015, EPA representatives no longer make the trip from San Francisco to Phoenix. Instead, they opt to communicate through a yearly conference call and online presentation.

Chase Dufault does not have internet to her home.

For this reason, she planned that October day around having a phone line and internet access available for the 6 p.m. start time. But less than an hour before the meeting was slated to begin, EPA sent word it was canceled.

For Chase Dufault it's just the most recent delay in getting answers about their concerns for how the cleanup is being handled.

Scott Meyer, with environmental group Don't Waste Arizona, says there has been a pattern of withdrawal of the EPA from dealing directly with the public.

"They're not really visible anymore. They literally phone it in now once a year," he says.

Motorola 52nd Street is one of the largest and most complex Superfund sites in the country.

According to the EPA, cleanup has been made more difficult because of the geological makeup of the plume and where the contamination is located: inside the bedrock that houses the groundwater. There have also been newer discoveries of chemicals adding even more contamination.

All the more reason why Meyer says current remedies for cleaning the plume are not enough.

"It's like taking a thimble to empty your swimming pool," Meyer said.

The Superfund site has two treatment plants that pump contaminated water from the ground, treats it to federal drinking water standards, then dumps it in a canal for irrigation or back into the ground.

There is a different Superfund site, North Indian Bend Wash in Scottsdale, which has boundaries of McDonald Drive to the north, Pima Road to the east, 68th Street to the west, and the Salt River to the south.

It also uses a pump and treat remedy. City officials say it's working.

"The upper unit is almost completely cleaned up at our site," says Suzanne Grandahl, Water Quality Director for City of Scottsdale. "There's only, I think, one monitor well that still shows a detection above the maximum contaminant level."

That means after nearly 30 years of pumping and treating that plume, the water closest to the ground is almost completely clean.

Though a much smaller site, Indian Bend Wash has had 91,000 pounds of TCE removed to date.

In nearly the same amount of time, Motorola 52nd Street has removed less than half that amount: 41,000 pounds.

EPA says the success of either site cannot be determined by the amount of contaminant removed. It released a statement saying in part, "Superfund remedies are designed for the specific conditions at each site, such as the type of underground material, how much and which contaminant was released, where the contamination is located..."

An agency spokesperson says the remedies at Motorola 52nd Street "are very effective at cleaning up the groundwater, reducing the size of the groundwater plume, and containing the plume to prevent migration."

Chase Dufault believes the socioeconomic and racial differences between who live over the plumes play a role in the urgency to clean them.

"We're not a very important neighborhood. I hate to use that word but our children--most of them are the first in their families to be speaking English or are the first to go to college and that doesn't seem to be the same neighborhood as a neighborhood up in Scottsdale," she says.

According to 2017 Census data, there are stark differences between the people who live on top of the plumes.

Sixty-two percent of the people who live in Motorola 52nd boundaries are Hispanic, have a median household income of $34,698, and 26.7 percent own their homes.

Inside Indian Bend Wash site boundaries, 75 percent are white, the median income is $63,435, and 58 percent own their homes.

We asked the EPA if demographics play a role in how clean-up is approached.

A spokesperson responded, saying, "All Superfund site cleanups, including at IBW and M52, are designed to be health protective, reduce contamination, prevent contamination from migrating, and comply with all applicable laws."

For Chase Dufault, applying the law isn't enough. She thinks every option should be on the table immediately.

"This is the number one site in the country--as it has been described for years--and it's gonna take longer. But it also needs to have the newest technology being used. Try something new. There are other options. That's what I've asked for and we need to look into some other options for this cleanup," she said.

She's hoping for new technology and new people to help advocate for it.

"I worry about not just the health but people understanding why we should consider this still a fight to fight," she said.

Of the thousands of homes affected, less than five community members represent their interests when the EPA holds its webinars. It's the primary reason the agency says it stopped holding public meetings.

Chase Dufault attributes the drop of community involvement to the exodus of homeowners and influx of renters who don't know what's going on.

"It's hard to keep the public interest going when meetings are via telephone, via the internet. It's not the same and it's hard to get people to come to a public meeting but try getting them to a community meeting in a room with a screen," she said.

The EPA says that since 2017 it has been assisting community members by "developing requested materials and tools" for them to use in outreach.

Meyer disputes that claim saying the EPA had its subcontractor meet with the group twice.

"The first meeting was to ask us what we wanted. The second was to tell us most of what we wanted couldn’t be done, and we are still waiting, over a year now, for these materials."

Despite setbacks and cancellations, Chase Dufault says she is in this fight for the long haul.

"I haven't always lived here. I've moved other places, I've lived other places. But I came back to live in my family home, so I am passionate about this community and the cleanup," she said.

The canceled webinar was recently rescheduled for November 20 from 6:00-8:00pm. The EPA says the link and call-in information will be given out 24 to 48 hours before. We will update this story with the information when it is released.