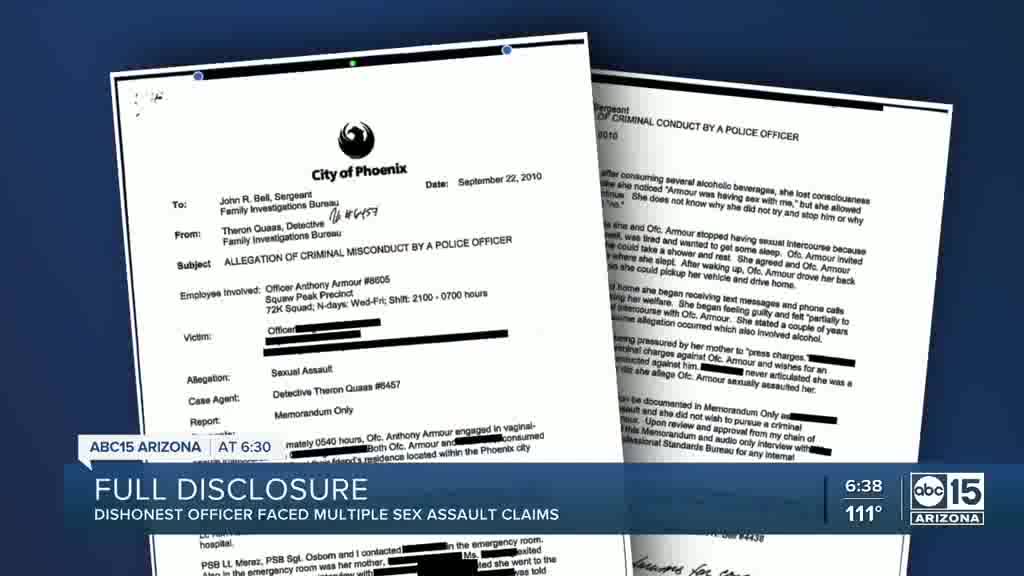 JeAnna Anderson knows what she’s fighting for. She hopes the lawsuit she’s filed against a notorious Phoenix police officer, who she claims sexually assaulted her during a traffic stop and has been accused of other sexual misconduct before, will finally lead the department to change its culture. 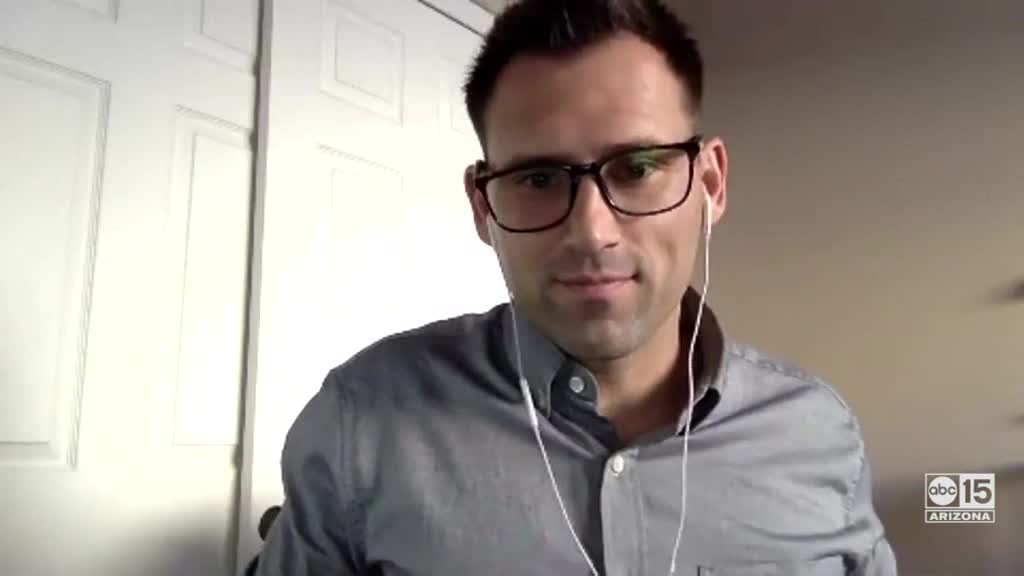 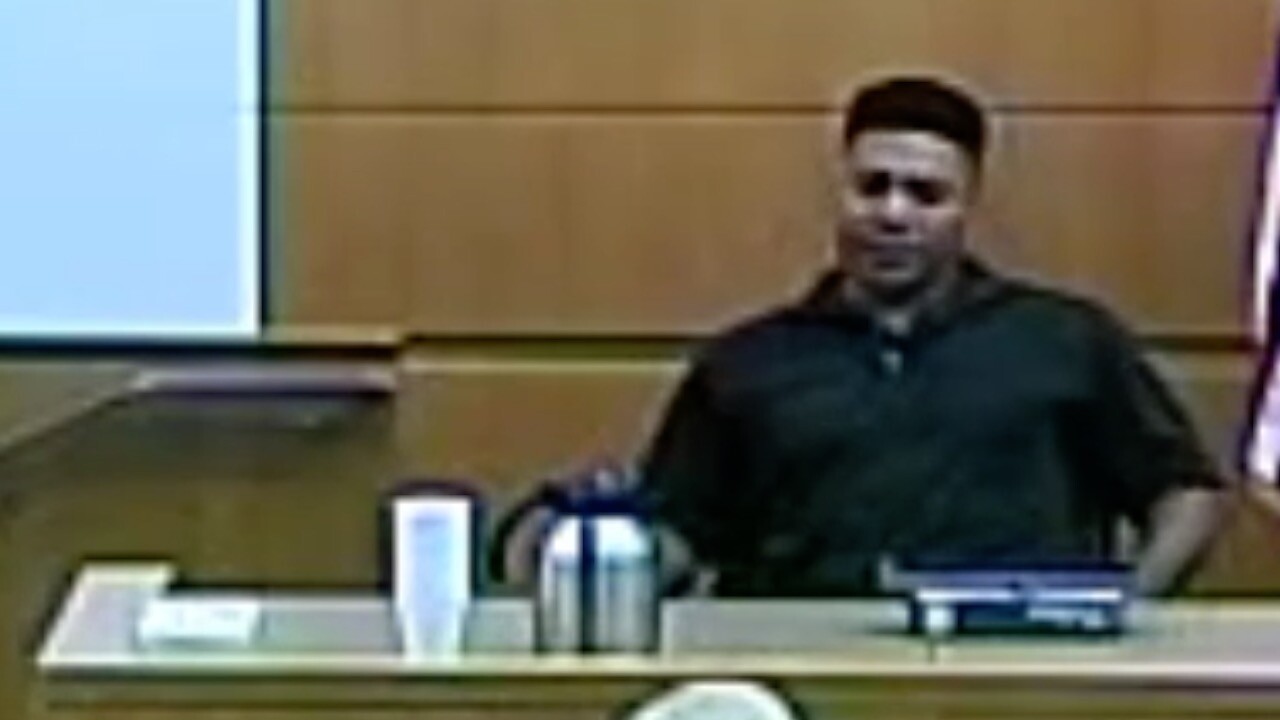 She hopes the lawsuit she’s filed against a notorious Phoenix police officer, who she claims sexually assaulted her during a traffic stop and has been accused of other sexual misconduct before, will finally lead the department to change its culture.

“[I’m fighting for] almost a word I don’t believe anymore, and that’s justice,” Anderson said. “I want to feel some sort of vindication. That I made an impact somewhere.”

Editor's Note: The second video in the player above is a full interview with JeAnna Anderson. It begins at 8:30.

The Phoenix officer at the center of Anderson’s case is Anthony Armour, a documented liar who’s tracked on Maricopa County’s “Brady” list.

Before retiring under an accidental disability claim earlier this year, he racked up multiple complaints and discipline for misconduct against women. ABC15 has also obtained an internal memo that shows Armour was accused of sexual assault by a fellow female officer in 2010.

“He has no respect for any woman’s life,” Anderson said. “For him to get away with it, someone is covering, someone is hiding things.”

Phoenix Police and attorneys for Anthony Armour did not immediately respond to a request for comment for this report.

Anderson’s civil trial against the Phoenix Police Department and Anthony Armour has been delayed due to the coronavirus pandemic.

The years-long case began because of a traffic stop on the night of October 16, 2015.

Anderson was stopped near 16th Street and Camelback Road because her license plates had been recently suspended.

Armour was not wearing a body camera.

The following account of what happened is based on Anderson’s interview with ABC15, incident reports, and documents filed in her case.

“When I rolled my window down, probably about halfway, I said, ‘Good evening officer, did I do something wrong?’ And the first thing he said was, ‘Don’t play dumb with me,’ just like that. And it was at that point, I knew that I’ve lost control, and something is not right here.”

Armour ran Anderson’s information and then ordered her out of the car. Because of the officer’s aggressive demeanor, Anderson said she asked for a supervisor to arrive.

“Before I could even get supervisor out, he said, ‘I don’t need my supervisor, just get out of the damn car,’” she said.

JeAnna then says she tried to start recording the stop on her phone. But she claims that Armour grabbed her wrist, stopped her, pulled her out of the car, and then handcuffed her.

Anderson said she screamed out to someone walking into a nearby McDonalds to ironically call the police.

“And as I’m slammed up against my car, he said to me with his teeth, like, cringed, ‘How you going to call the police on the damn police,'” she said. “I just started crying.”

Anderson then said that Armour put his hands into her jogging pants and ran his hand down between her thighs, touching her pubic region, according to her lawsuit.

“I just remember being told to shut up in almost a whisper,” she said. “And he comes back up (with his hand), and he goes underneath my t-shirt and starts groping and fondling my left breast.”

When she was placed inside the police car, she had a panic attack before passing out, according to her lawsuit.

When she woke up, she found herself laying on the police SUV’s rear seat floor and two other officers had arrived.

One shined a flashlight in her face while the other dragged her out of the car by her feet.

Anderson said she believes Armour took the photos to intimidate her later. None of the officers at the scene admitted to taking the photos.

All charges against Anderson were eventually dropped.

Records show Phoenix police didn’t discipline Armour for the traffic stop and have aggressively defended him in the case against the city.

“The system is so corrupt,” Anderson said. “They don’t care what they have on the street. That is obvious.”

On November 4th, 2015, Armour unlawfully entered a woman’s apartment, falsely arrested her, lied to his supervisor regarding the circumstances, and lied in his incident record, records show.

His supervisor also told him to release the woman from custody, but Armour had her booked into jail anyway.

Armour was suspended for 80 hours, but not fired.

Phoenix police also didn’t report the case to the Arizona Peace Officers Standard and Training Board, which is the state police board that certifies cops and could have revoked his license.

These two incidents are just a few of the multiple complaints against Armour, including one by a female colleague in 2010.

The fellow officer, whose name ABC15 is withholding, claimed that, after having some drinks, she woke up after a friend’s party with Armour having sex with her.

The woman underwent a sexual assault examination at a local hospital and reported the incident to her department.

She didn’t want a criminal case. No charges were brought.

But Phoenix documented the incident in Armour’s internal affairs file. The city has asked a judge to keep the previous sexual assault allegation out of court in Anderson’s case.

“It’s a sad thing,” Anderson said. “It’s a very sad thing. This pile of dirt has been swept up and it’s flown under the radar.”

Court records show Phoenix is not only spending taxpayer funds to defend against Anderson's lawsuits, the city is also using an assistant police chief, Steve Martos, as an expert witness to justify Armour’s use-of-force and conduct in the case.

“(Chief) Jeri Williams needs to be fired,” Anderson said. “She has no clue, and she’s the diaper that’s covering up the mess.”