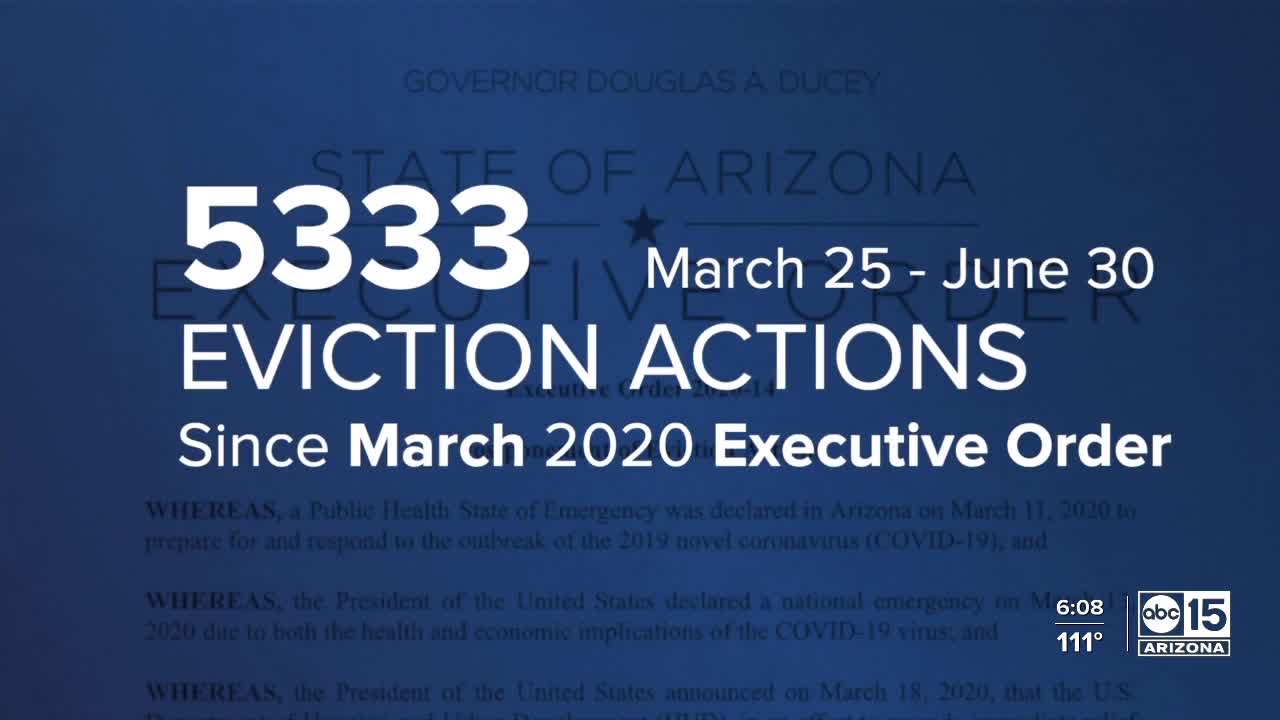 Renters being evicted despite Governor Ducey's promises to stop evictions amid the coronavirus.

“You’re safer at home,” is the message from Governor Ducey about how to get the coronavirus pandemic under control in Arizona.

However, some residents have already or are in the process of losing their homes, because of COVID-19 closures and months-long delays in government benefits.

Jeff and Karen Hoch are in that process right now.

“I can’t imagine having to live in my car in this heat,” Mrs. Hoch told ABC15.

That is a real possibility for the Hochs.

On Thursday, Jeff and Karen appeared in eviction court telephonically.

“This is a COVID related incident,” Mr. Hoch told the judge. “I lost my job due to financial difficulties for the company that I was working at April 1.”

They are behind in paying rent for April, May, June, and July. Mr. Hoch told the judge they never got stimulus checks, and by the time unemployment showed up in June, his landlord refused to take payment.

It’s a situation ABC15 has heard before from several renters during the pandemic.

Rideshare driver Stephanie Akins said she and her seven-year-old daughter were evicted from their Peoria apartment while waiting for unemployment and rental assistance in June.

“This is no fault of my own,” she told ABC15. “I feel like my hands are tied behind my back and I can’t do anything about it. I feel helpless.”

These are situations Governor Ducey seemed to not understand at Thursday’s press conference.

“I think for an Arizonan that had to file unemployment insurance, they have had access to $840 a week since they filed each and every week in doing that,” Ducey said. “In talking to the industry, the numbers that's been shared with us is 1 percent of folks are in arrears or haven't worked out a situation with their landlord.”

ABC15 found that 5,333 eviction actions have been filed since Ducey’s executive order postponing enforcement, according to Maricopa County Justice Courts. A number which is likely to go up once the moratorium is lifted on July 23.

With continued delays in unemployment benefits and rental assistance, we asked the governor on Thursday what he plans to do to help.

“We've put the order out there. The order is in effect today,” he said. “We're going to get our arms around what the facts are around the situation.”

Then, he seemed to imply that people who are getting unemployment money are holding on to it and refusing to pay rent.

“If someone is receiving $840 a week in assistance from the government and not remitting that for their rent, that's not the right thing,” he said.

The Hochs said they had every intention of paying when they got the money.

The judge granted the eviction.

“We just got to find someplace to go. You know? I think that's terrible that we fell through the cracks. And, you know, it hurts, and we're scared,” Mrs. Hoch said.

They are packing up their home and putting what they can in storage while they wait for the Constable to remove them.

Also, while they have the money to move in somewhere because the landlord refused rent, they say they can't seem to find anywhere they can actually afford to live.

“Affordable housing would be a thousand bucks or less a month, preferably with utilities included, you know. That's something that we could swing,” he said.