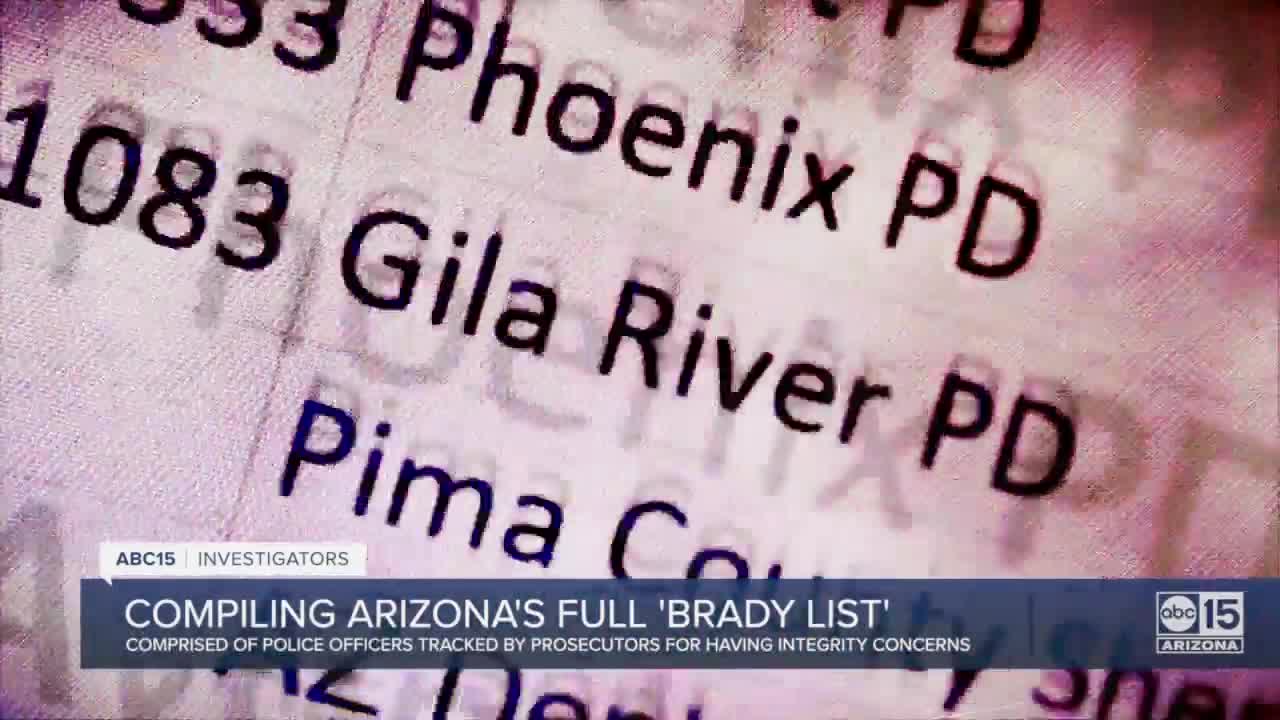 For the first time ever, ABC15 has published a searchable database of all Arizona law enforcement officials tracked by prosecutors for credibility concerns, including past crimes, lying on the job, and other integrity issues. For the first time ever, ABC15 has published a searchable database of all Arizona law enforcement officials tracked by prosecutors for credibility concerns, including past crimes, lying on the job, and other integrity issues.

Through a series of public record requests, ABC15 spent nearly a year requesting and organizing Brady lists from every county in the state. County attorneys maintain the lists in response to the 1963 U.S. Supreme Court case, Brady v. Maryland.

Take a look at the searchable database below, which includes name, status, and other details.

[HELP US REPORT: ABC15 is working on more stories about Arizona’s Brady lists and officers. The system is flawed and lacks adequate oversight. If you have information about law enforcement officials in our database, officials who should be added, officials wrongly added, or have a story to tell, contact ABC15 Investigator Dave Biscobing at Dave@ABC15.com]

To better ensure fair trials, the Supreme Court ruled prosecutors must turn over all exculpatory evidence in criminal cases, including unfavorable information about police officers’ past misconduct.

Most often, officers are added to each county's list because of instances of dishonesty.

Every county attorney’s office, except two, provided Brady lists to ABC15. Graham County claimed there are no officers with backgrounds that require disclosure. Gila County said it doesn’t keep a list to track problematic officers because they have only a few names that need to be disclosed, and those names were added to the above list.

Not every county tracks the same information regarding Brady officers. All provided names, however, some counties did not provide information about when those officers’ names were added to the list or what agency they worked for.

Out of the 1,400 names in the database, ABC15 was able to determine at least 220 officers are still on the job by cross-referencing names to a roll of certified officers from the state police board. Of the counties that provided dates for when officers were added to the lists, the majority of cases occurred since 2010.

The Phoenix Police Department, the state’s largest agency, has the most officers on the list (390) and the most still listed as active (106), according to the data.

The earliest that any Arizona county began maintaining a Brady list was in the late 1990s.

Several dozen names in the database are correctional officers and some non-sworn law enforcement positions, including evidence technicians and transcribers.

“A police officer’s word is incredibly powerful to get a conviction,” said Jared Keenan, a former public defender now with the ACLU of Arizona. “In some cases, it is the only evidence that a prosecutor has.”

Keenan, and other defense attorneys, believe public knowledge about these officers is important and that there should be even more officers on the lists. The Brady system in Arizona relies on police departments to investigate and self-report problematic officers to county attorney’s offices.

Keenan said that defense attorneys also routinely run into problems with prosecutors admitting officers are on Brady lists and then disclosing all information about their problematic conduct.

Police unions have also criticized Brady lists for opposing reasons, claiming it's a "scarlet letter" for officers who don’t have enough appeal power to remove their names.

Union officials have tried to get lawmakers to pass laws in recent years, including House Bill 2114 this legislative session, to institute an uniform appellate process and make Brady lists exempt from public record.

HB2114 has so far passed an initial hearing. But an amendment instituted this week removed the provision that would hide the officers information.

Leaders of multiple police unions did not respond to multiple requests for comment for this story.