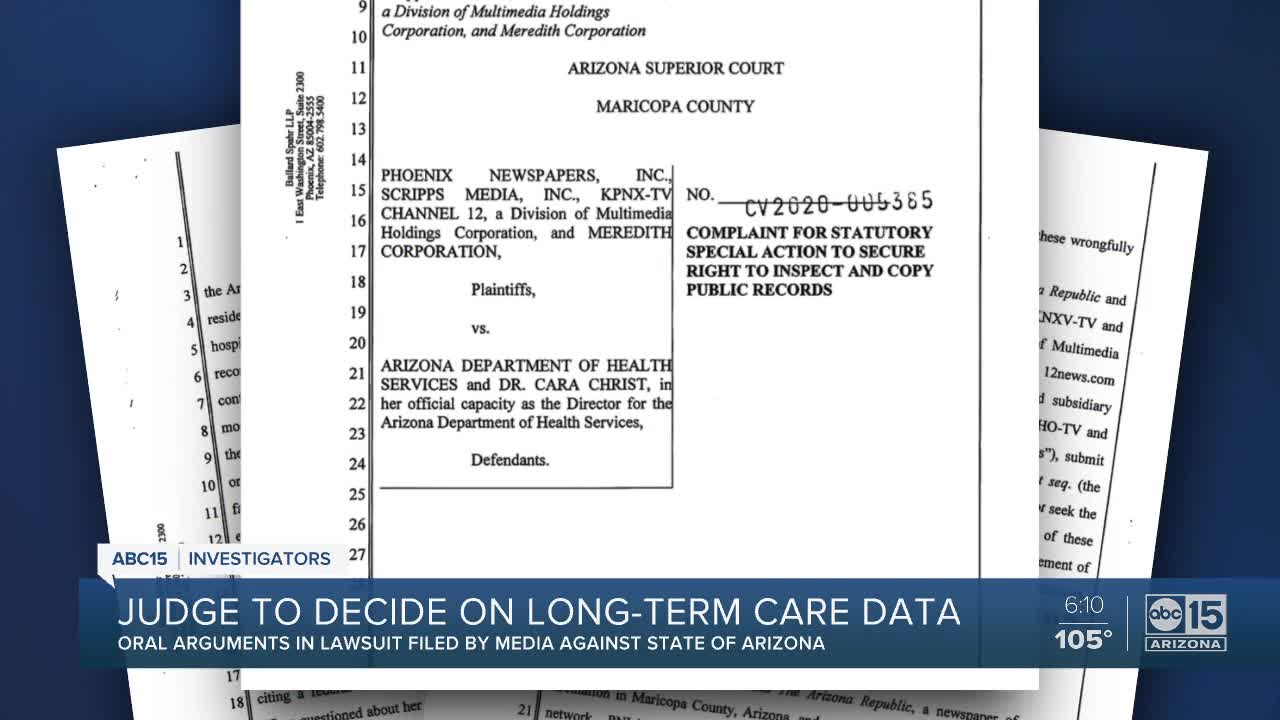 Oral arguments in lawsuit filed by media against State of Arizona.

PHOENIX — A Maricopa County Superior Court judge said he will likely issue a ruling by the end of the week in a lawsuit challenging Arizona’s refusal to release the names of long-term care facilities with COVID-19 outbreaks.

However, judge Christopher Coury also signaled during oral arguments on Wednesday that his ruling may not fully address all issues in the case and he may call for an evidentiary hearing.

“I think some of this is going to require a factual hearing,” Coury told attorneys during oral arguments.

News organizations filed a joint lawsuit against the state in early May for refusing to release the names of long-term care facilities with COVID-19 cases and deaths.

Reporters have sought the general information since early April. Since that time, hundreds of residents have died.

“If we knew this information seven weeks ago, there are lots of things we as a community could do, steps we could take, to protect ourselves and to protect our loved ones,” said attorney David Bodney, who represents the media organizations.

Arizona officials have used a series of shifting reasons for why they won’t disclose the facility names and number of cases statewide. Last week, the state’s two outside law firms laid out four main legal arguments on their behalf:

During oral arguments, the state’s lawyer, Craig Morgan, criticized the media’s argument that public access to this information could save lives.

As of May 27, data released by Maricopa County shows that more 71% of coronavirus deaths in the Valley are residents of long-term care.

According to a 2019 state audit, the health department also failed to properly and timely investigate many complaints and violations inside long-term care facilities for years. Auditors raised concerns that the state put residents at risk. They found thousands of complaints were ignored.

Judge Coury pressed both sides with questions about state law and about how businesses could be harmed by disclosing the information.

Coury voiced concern about issues with how statutes are written and said he sees some conflicts with language and the law that he needs to navigate as he writes his ruling.

The judge told attorneys he would likely rule by Friday or early next week at the latest.