Convicted 'anesthesiologist' Pankaj Goyal back at it after lenient plea deal 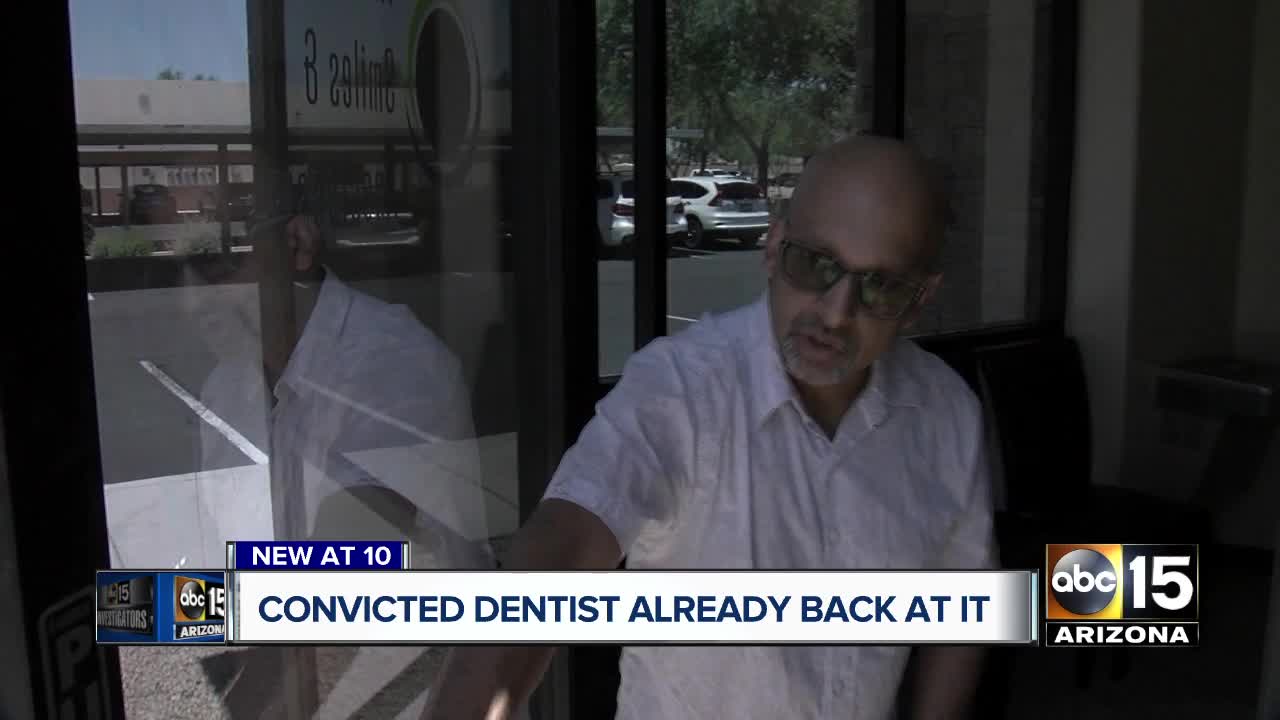 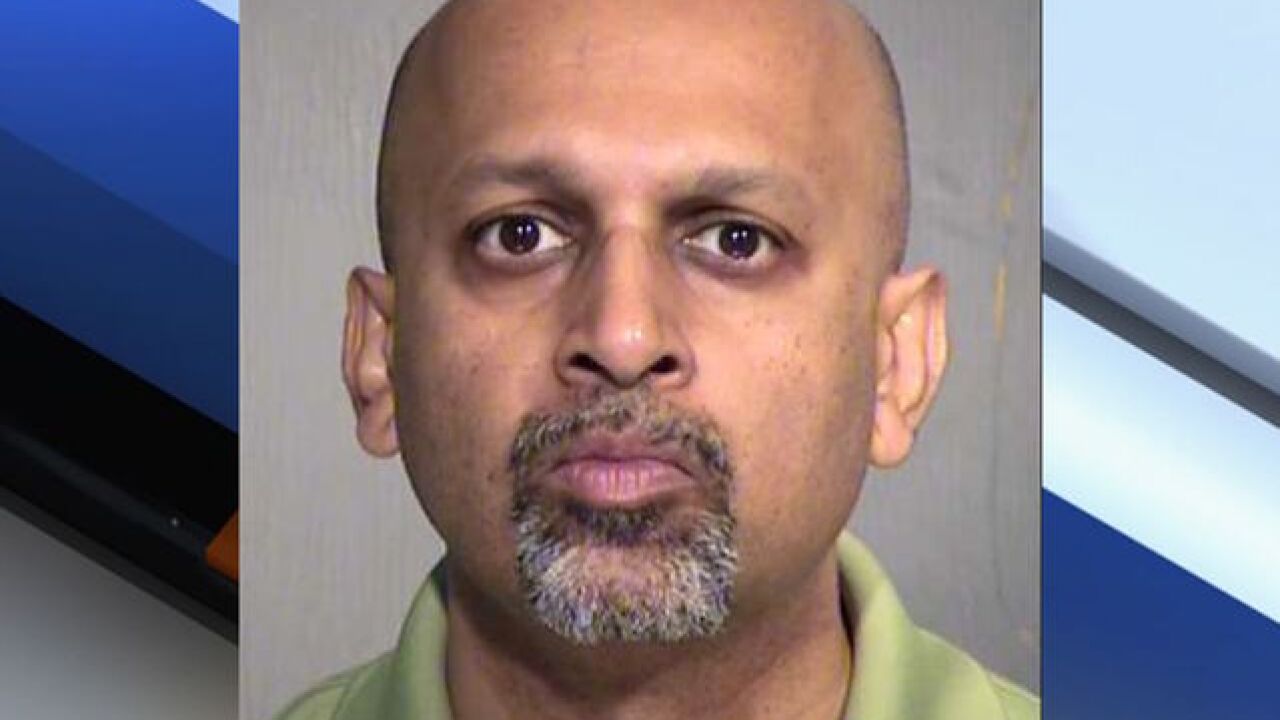 An Arizona dentist, who was recently convicted of forging his anesthesia credentials, has been teaching sedation and actively participating in the treatment of patients, according to multiple witnesses and video obtained by ABC15.

Pankaj Goyal was in Cleveland helping lead a week-long sedation / anesthesia course in mid-August for dentists held by the Academy of Dental and Medical Anesthesia (ADMA).

“He had an active role,” said Dr. Karen Delaney, a dentist from Maine. “At one point, (Goyal) actually reached around me and administered drugs to my patients.”

“It’s wrong this man pled guilty to falsifying his documents a mere couple months earlier, and he’s there teaching me how to do this type of stuff without my knowledge,” said Dr. Jerome Culter, a Nevada dentist. “I don’t think that’s right.”

Goyal was arrested in July 2018 after an ABC15 investigation exposed how Goyal faked, forged, and falsified his credentials (including a degree made in Microsoft Word) and years of other documents to obtain and keep an official Arizona anesthesia permit.

Goyal’s involvement in the class came just two months after he was sentenced for pleading guilty to three felony forgery charges.

He also agreed to forfeit his Arizona anesthesia permit – and eventually surrendered his full dentistry license.

So how was Goyal even in a position to help teach the class and treat patients?

He never received any prison time for his crimes because of a lenient plea deal offered by the Attorney General’s Office.

Goyal still has an active license in Ohio.

The ABC15 Investigators also discovered concerning details about the ADMA – an organization that’s used by many state dental boards to train dentists across the country.

Several of the organization’s leaders knew about Goyal’s conviction, lied about it to its students, and have convictions themselves, according to interviews and records.

Goyal’s case continues to highlight a deeply-broken system in Arizona, and across the country, that lets medical impostors evade accountability and put people at risk.

The Academy of Dental and Medical Anesthesia is an organization recognized by many state dental boards and provides training and certification to dentists across the country.

Dentists in attendance of ADMA’s week-long IV sedation course in Cleveland first began suspecting something wasn’t right about Goyal when he wasn’t officially introduced to the class by his professional name.

Drs. Cutler and Delaney said he was first and introduced as “PJ” -- not Dr. Goyal – an attempt they believe to keep them from researching more about the convicted dentist.

They further became suspicious when “PJ” told them he was no longer practicing and just teaching. The dentists’ questions grew when Goyal began lecturing the class with a computer-slide presentation from a different training organization.

That’s when the dentists decided to search the internet and quickly discovered ABC15’s investigation and news about Goyal’s arrest and conviction.

Before confronting ADMA leaders with what they found, one dentist snapped a picture of Goyal teaching and also took a cell phone video.

Once the dentists asked ADMA for an explanation, they said the organization's Chief Executive Officer, Cory Pickens, and Chief Operating Officer, Erwin Washington, both claimed to have been duped by Goyal.

“(Pickens) stated he really didn’t know Goyal, that he didn’t even know his last name,” Cutler said. “He called him a clown and that he terminated him immediately.”

Other dentists confirmed the comments and said they quickly learned that they weren’t true.

In fact, shortly after the conversation, Cutler and Delaney said they discovered Goyal was overseeing another sedation case.

“Goyal was actually in on a case,” Delaney said. “That was a half an hour after they told us he was immediately terminated, which was obviously not true.”

In addition to the cell phone video and picture, multiple dentists in the class provided ABC15 with emails and other documents that show ADMA executives acknowledging Goyal’s participation in the class.

WHAT THE ADMA KNEW

On Friday, August 23, ABC15 first called and spoke to Cory Pickens, the ADMA’s CEO and an anesthesiologist.

Pickens denied that Goyal was an instructor for the course and did not conduct official work for the ADMA.

“(Goyal) was not teaching. He didn't get the opportunity to teach,” he said.

Instead, Pickens said that Goyal was “auditioning” for a teaching job and was being “observed” to see if he could be hired into the role.

He also told ABC15 that Goyal had applied to the ADMA within “the course of weeks” and was terminated once they found out about his past.

But letters obtained by ABC15 from Goyal’s criminal case show that ADMA executives, including Pickens, had known about Goyal’s arrest and upcoming conviction for nearly a year.

On Goyal’s behalf, three ADMA leaders – Pickens, Washington, and Gary Mermel, a course director – wrote letters to the judge in the criminal case.

Those letters were dated in October and November of 2018 and they directly contradict what Pickens told ABC15.

Mermel wrote that Goyal began working with the ADMA in April 2018 and that Goyal worked with the organization to provide full-time intensive instruction in sedation.

Washington also wrote that Goyal was an instructor.

Pickens wrote, “I feel that Dr. Goyal’s education contributions to our program have made him a valuable asset not only to our growing business but more importantly to those that he has taught. PJ can often be found after class and during breaks answering questions and giving advice to dentists new to sedation.”

After discovering the letters, ABC15 called Pickens back on August 26.

Pickens denied lying about what he said days before but then stopped speaking entirely, and eventually hung up, after ABC15 began reading his own letter.

The dentists who took the class said the letters raised serious questions about the ADMA. Dr. Delaney and Dr. Culter said they are speaking out because it's important that the public and other dentists understand what's happened.

Cutler said, “I just don’t know what else to say other than wow these guys are lying. They’re con men. They are lying straight to my face.”

Both Pickens and Washington, ADMA’s CEO and COO, have convictions themselves.

Pickens was convicted of prescription drug fraud; and Washington, a former United Airlines pilot, pleaded guilty to being over the legal limit for alcohol while flying a plane.

ADMA officials did not return subsequent requests for comment.

Goyal did not receive any prison time, just fines and probation. He also agreed to forfeit his anesthesia license.

But as part of the plea deal, prosecutors did not require Goyal to give up his general dentistry license or licenses in other states.

It’s a plea deal that multiple victims felt was too lenient given the years-long scheme that Goyal used to defraud the state and his patients, according to statements in a pre-sentence report and ABC15 interviews.

At sentencing, an Attorney General’s Office prosecutor said the state believed that Goyal was unlikely to re-offend and signed off on the plea deal.

Goyal also cried as spoke to the judge.

“I'm here before you as something I never thought I would be in my life, a convicted criminal. It's hard to express the shame I feel for betraying the trust and confidence of the dental profession and my family,” he said. “I ask the court to believe me today that I didn’t set out to break the law.”

It’s not clear if Goyal has violated the terms of his plea deal or probation with his work for the ADMA.

The Attorney General’s Office did not return multiple requests for comment seeking information about Goyal’s probation terms and whether the state gave him too light of a plea deal.

However, a special agent for the AG’s Office is investigating the situation and has interviewed dentists who attended the ADMA course.

Despite his criminal conviction, Goyal is also still a licensed dentist in Ohio and has an active sedation permit.

Ohio has moved to begin disciplinary proceedings against Goyal but has not suspended his license. A spokesperson for the Ohio State Dental Board would not comment on Goyal or his case citing confidentiality laws.

Goyal and his attorneys did not respond to a request for comment.