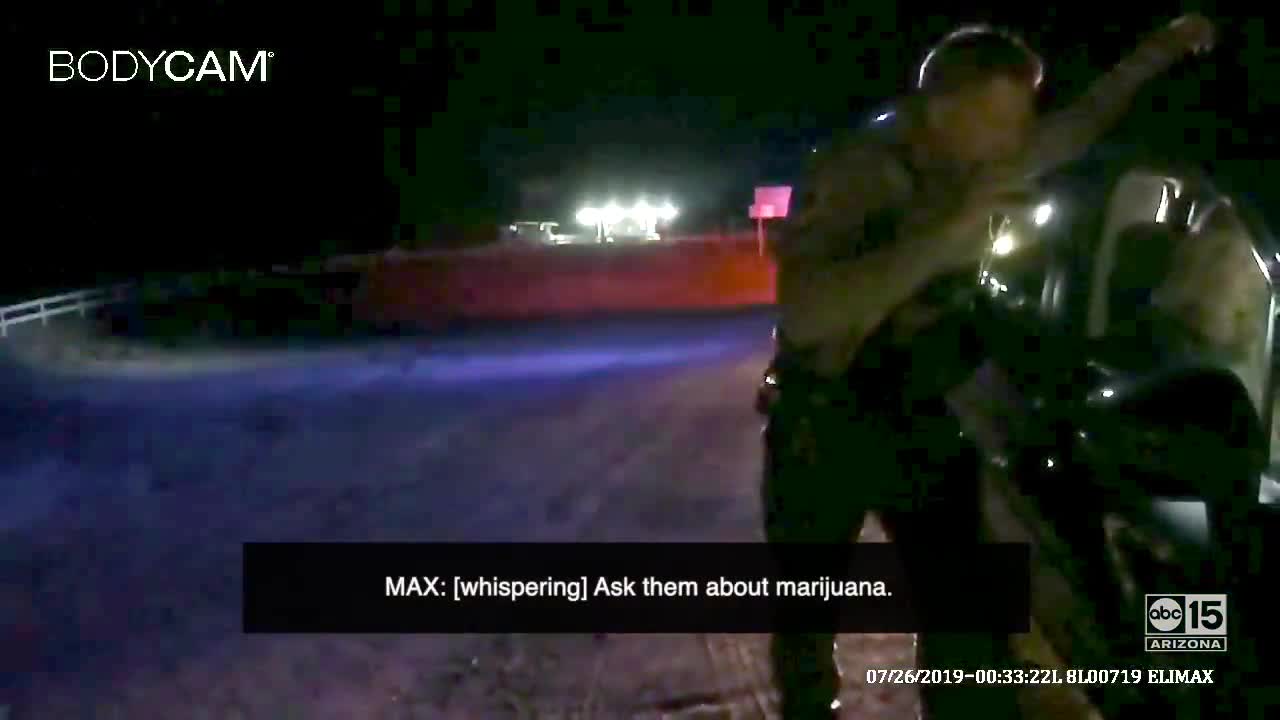 After a La Paz County Sheriff’s deputy was fired for “harassing and humiliating” people, ABC15 has obtained more body camera videos and records that reveal additional issues during traffic stops.

After a La Paz County Sheriff’s deputy was fired for “harassing and humiliating” people, ABC15 has obtained more body camera videos and records that reveal additional issues during traffic stops.

The videos show Eli Max training younger deputies, making a roadside bet about whether he can find drugs, and arresting a sober driver for DUI.

In another traffic stop, Max told a mother who wasn’t arrested or charged with any crime that her children will be “f***ed,” according to information obtained by ABC15.

In an emailed statement, the La Paz County Sheriff's Office said, "We do our best to ensure the citizens are receiving fair and balanced service from our Officers. We have nearly 5,000 square miles to cover, however, so there are times that our staff can go without direct supervision for quite some time."

Earlier this year, Max was fired in part because of his conduct during the traffic stop of Philip Colbert on September 19, 2019.

RELATED: Man speaks to ABC15 after being pulled over for 'the little tree in [his car] window'

Colbert, a 22-year-old black man from Lake Havasu who was driving to Parker to visit his father, posted a cell phone video of the stop on YouTube.

Max told Colbert he stopped him because of the “Little Tree” air freshener hanging from his rear-view mirror. Throughout the stop, the deputy repeatedly asks Colbert whether or not he was under the influence of marijuana.

The Sheriff’s Office found Max had no legitimate basis to harass Colbert with the repeated questioning.

Officials also said it was part of a continuing problem with Max, who’s worked for at least two other Arizona law enforcement agencies in the past seven years, records show.

On July 26, 2019, less than two months before the Colbert stop, Max and a trainee pulled over a man for speeding.

The driver was headed to Lake Havasu from California.

As the deputy in training begins asking the driver for his license and registration, Max immediately whispers to the trainee.

“Ask them about marijuana,” Max said.

The trainee does but the driver and passenger deny having any.

Back in the patrol car as the two verify the driver’s license, Max brings up marijuana again.

MAX: How much weed do you think is in that car?

MAX: I think there is.

A few seconds later, the trainee says he’s “interested” in seeing Max try and find some.

Max then explains why he believes there’s marijuana in the car.

“He’s 28, coming from California, a state where it’s perfectly legal,” Max says in the body camera video. “They’re going to Havasu, which is not only a party town, but it's a vacation weekend. The age range for people that consume marijuana are between 12 and f***ing 75 years old.”

Before Max goes out to search the car himself, the deputy tells him, "You go ahead. I'll write this; and if you get something dude, I'll f***ing buy you something."

The body camera video abruptly stops in the middle of Max’s search of the car.

Online court records show that the driver was only cited for speeding. No drug charges were filed.

On September 4, 2019, Max and another deputy in training, Jordan Lang, stop a pickup truck for allegedly rolling a stop sign.

Lang quickly asks the driver if he’s had anything to drink.

When the driver says nothing, Lang then asks him a leading question, “When’s the last time you smoked marijuana?”

The driver responds, “Not at all.”

When Lang goes back to the patrol vehicle to talk with Max, he tells him that the driver seems nervous and shaky.

The driver claimed it was because he’s tired.

After the field sobriety tests, the deputies search the truck and find no drugs or alcohol.

But decide to arrest him for driving under the influence of drugs anyway.

The two discuss the decision in the patrol vehicle.

MAX: I guarantee that if you put cuffs on this guy and say, 'You’re under arrest for DUI,' he’s going to go, ‘Yeah I smoked.' And if he wants to stick to his guns and he’s showing signs and symptoms, you can make a good faith arrest. Do you feel comfortable with that?

LANG: Yeah, we have quite a lot.

Weeks later, the driver’s blood test results came back negative. There were no detectable levels of any drugs.

The driver has filed a notice of claim against the Sheriff’s Office.

In a September 21, 2019 stop, Max repeatedly questioned a woman driver if she had been drinking.

The woman admitted to having a single drink during dinner but wasn’t intoxicated.

Max didn’t arrest or cite her.

However, during the stop, he told her that if she didn’t stop having a drink during dinner, her kids would be “f***ed,” according to case information.

ABC15 has requested video of the woman’s stop, and officials have promised its release by the end of the week.