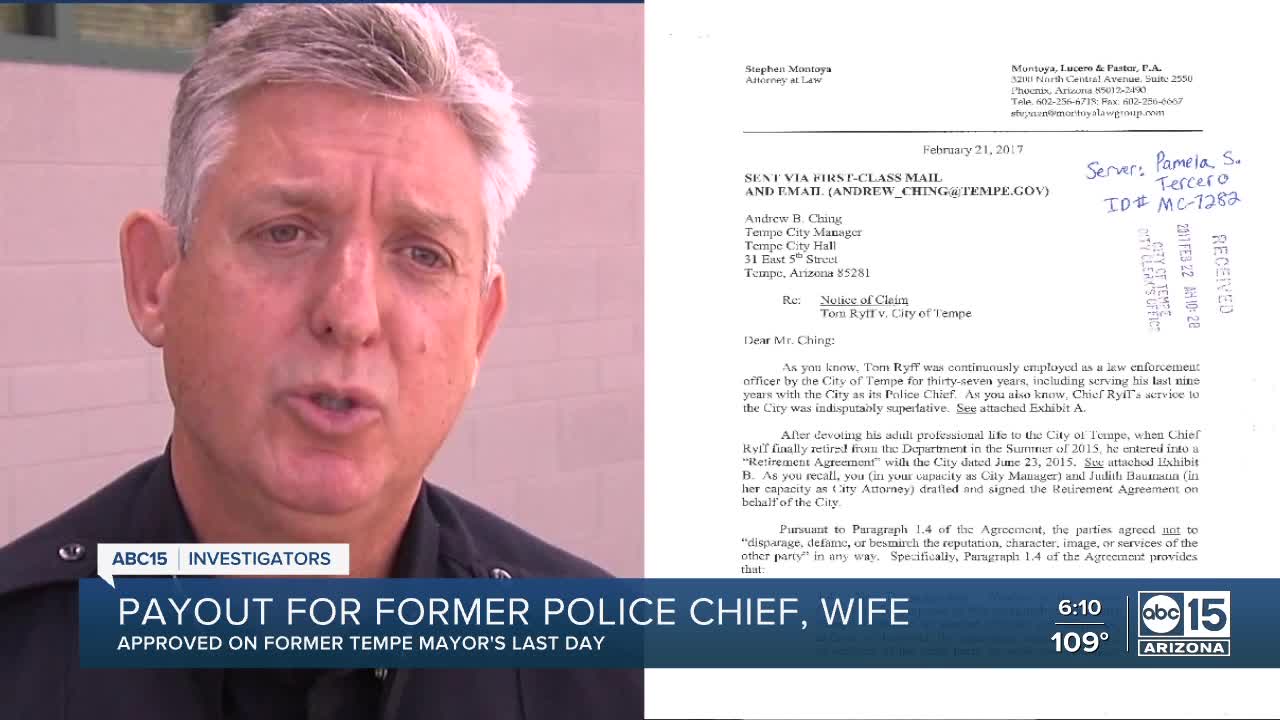 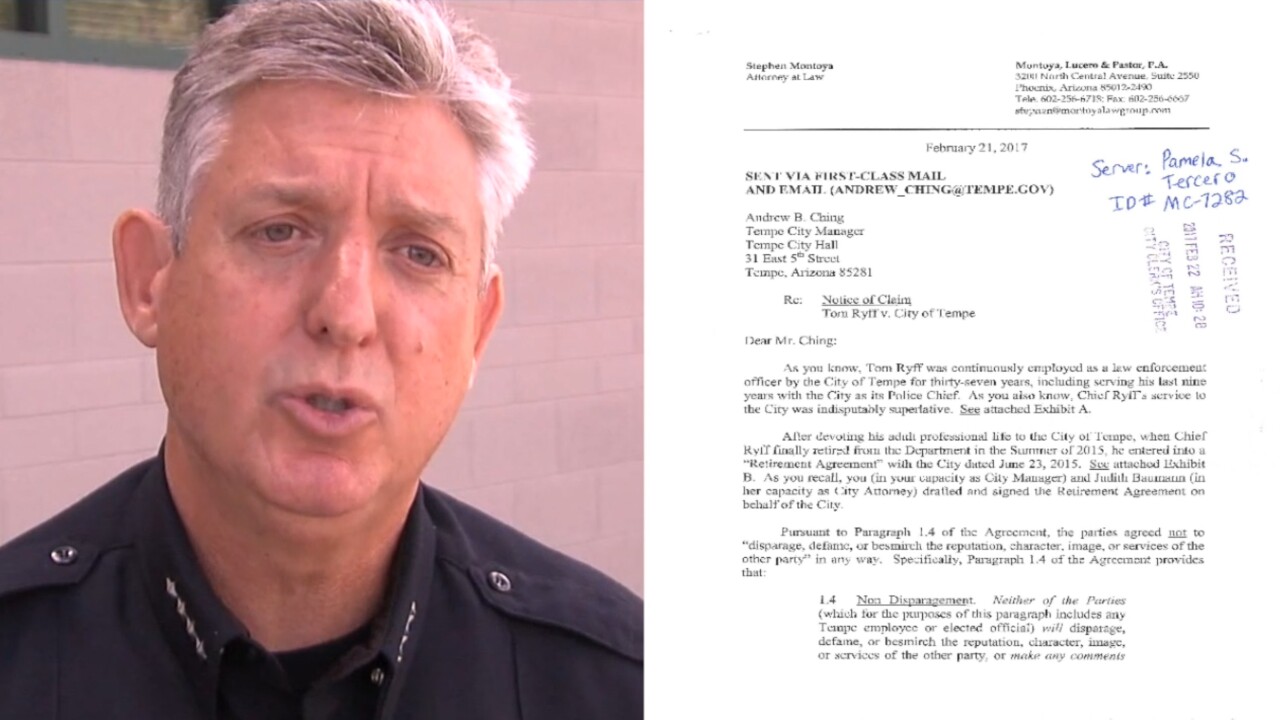 The deal is now drawing legal and taxpayer criticism due to a last-minute restructuring, which added payment to the former chief's wife.

Tempe City Manager Andrew Ching quietly signed deals with former police chief Tom Ryff and wife Rose Anne Ryff on July 1, the day before Tempe's new mayor was sworn in. Ryff and his wife each received $75,000, for a combined $150,000.

"It's just suspicious," Tempe taxpayer Bill Richardson told the ABC15 Investigators, "because the way they did it, the time they did it."

"This was really a baseless lawsuit," Shapira said when interviewed this week. "Tom Ryff made a lot of money over a long period of time with the city. As chief, he was disappointing."

It appeared the lawyers had a deal on the breach of contract dispute in December 2019. A $150,000 settlement agreement appeared on a city council agenda, but, at the last minute, then-mayor Mark Mitchell pulled it from consideration.

The Ryff settlement was reworked in late June, in the last days before a new mayor and city council were to be sworn in.

The former chief's wife, Rose Anne Ryff filed her own, separate notice of claim on June 26. It alleged she too suffered the same financial damage her husband did three years prior.

Just days later, both Ryffs and Ching signed settlements agreements, giving each spouse $75,000. Unlike the earlier $150,000 proposed settlement just to the chief, the two lower amounts did not need to be discussed or voted on in a public forum. According to the city charter, only settlements of $75,001 or more need city council approval.

The Tempe City Manager's Office released documents pertaining to the settlement to ABC15 after a public records request was made. Ching's also released this statement:

The city and former Police Chief Tom Ryff have settled their claims against each other and agreed to dismiss the lawsuit in which the former employee alleged breach of a contract. The decision to settle was not based on any actions taken by our current or former employees, but rather to avoid the expense associated with protracted litigation. The decision was made by the City Manager in conjunction with the City Attorney’s Office, and should not be construed as an opinion of any elected official or employee. The city makes no admissions of liability.

Shapira who was deposed in Ryff's lawsuit believes there's more to it. "I also understand that Tom Ryff was threatening to put information out there that was, according to the settlement, embarrassing to the city," he said.

The city manager would not comment on Shapira's allegation, nor would he respond to ABC15's questions on how he could legally justify the payment to Ryff's wife.

According to state statute, "any [notice of] claim that is not filed within one hundred eighty days after the cause of action accrues is barred and no action may be maintained thereon." However, Rose Anne Ryff filed her claim more than three years after the city's alleged breach of contract, and she did not offer any new accusations or reasoning why there was a delayed filing.

ABC15 reached out to three legal experts about the notice of claim timeline. Between them, they have handled hundreds of such legal actions. None recalled any case when a government official was willing to pay out a claim filed so long after the 180-day threshold. All three suggested such a payment could be classified as a "gift" from the city and may not pass muster as settlement of a legitimate legal claim.

"I don't think it would be proper - and probably would be illegal - for a government to simply hand out money as a gift to somebody simply because they said, 'I was injured three years ago - and I know I haven't complied with the notice of claim statute - I still want you to give me some money,'" said attorney Dave Abney when discussing the legalities of notices of claim with ABC15.

Ryff's lawyer, Stephen Montoya, did not comment on whether the city's deal was appropriately structured nor whether the former police chief threatened to expose embarrassing information about the city.

Montoya did tell ABC15 that "Tom believes he vindicated himself with the settlement."

ABC15 also reached out to every Tempe city council member, including current mayor Corey Woods and former mayor Mark Mitchell. The councilmembers either did not return ABC15's call or referred us to the city manager for comment.

Got a news tip? Email ABC15 Investigator Melissa Blasius at Melissa.Blasius@abc15.com, call 602-803-2506, or reach out to her on Twitter and Facebook.