Valley man upset after law allows condo to be taken; state law allows for take over by majority 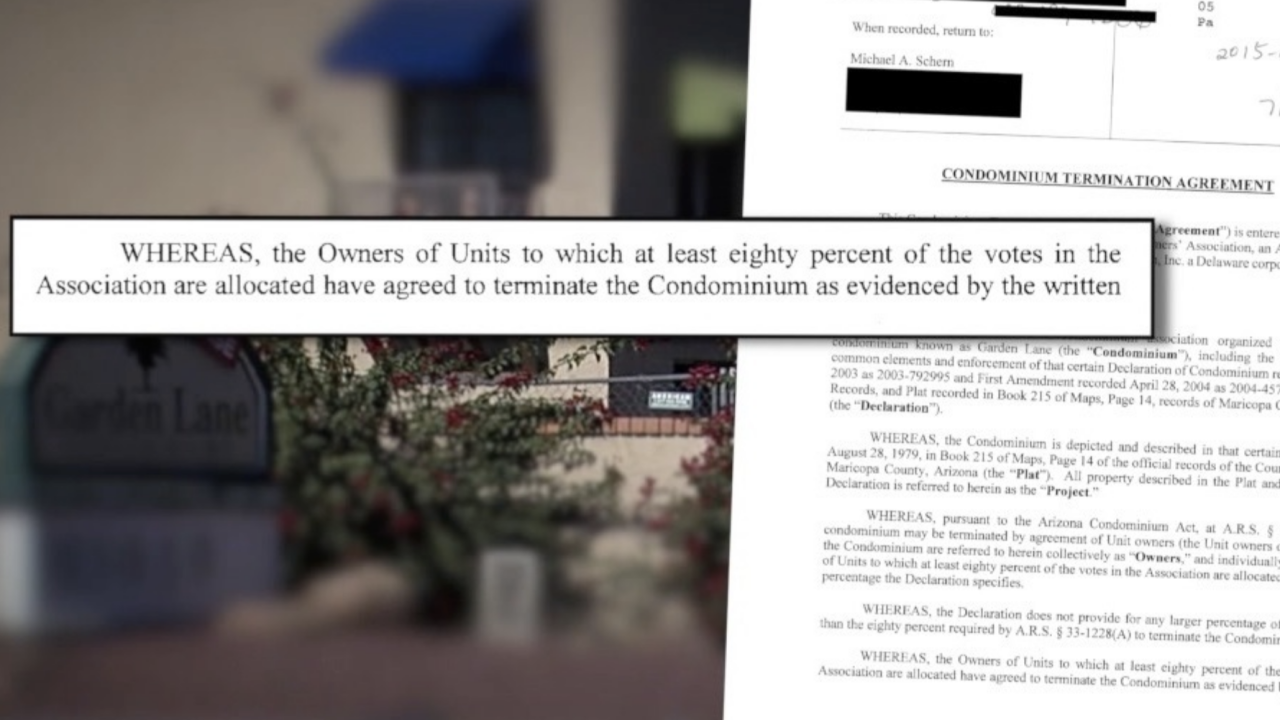 So when he saw a condo with a good price, he jumped on it.

A couple of weeks later, he was the new owner. Or so he thought.

When he arrived to start to work on it, he says the locks had been changed and he was told there was a different owner.

He called the title agency and says they assured him the title was clear and the condo was his.

It was even recorded with the county.

But a few days later he says the title company told him the condo actually belonged to Grand Canyon University (GCU).

He says he couldn't understand what happened.

"I paid for that property! Why I'm (sic) not the owner for the property," he says.

What Behzad and apparently no one else knew is that there was a completely different deal going on at the same time as his.

The entire complex was being turned over to GCU thanks to a little known state law.

And if you own a condo, the same thing could happen to you.

It basically means that if 80 percent of the owners agree to it a condo association can disband and complex can be sold at what is considered fair market value.

County records show GCU bought several units in the complex at the time of Behzad's purchase, and the few remaining owners signed off on it. Which meant Behzad was out of luck.

So, why didn't anybody catch this?

The title company also declined not comment because it's a pending matter. But Behzad says the title company sent a response to the Arizona Department of Financial Institutions after he filed a complaint.

Saying in part "the title commitment did not disclose that the condominium regime had been legally terminated" and that it "made no error and has no liability to the buyer."

Behzad was able to get his money back after filing a claim against the title insurance but say he still feels cheated.

"Where is the justice here?" he asks.

So if you're buying a condo....make sure to communicate directly with the HOA yourself.

Get any pending transactions or expected assessments in writing. That way you have something that can used for accountability.

Need my help or want to volunteer to help others as part of the Assistance League of Phoenix team, call us at 855-323-1515, find me on Facebook or Twitter.

You can also send me a video of your problem to Joe@abc15.com or sign up for our monthly newsletter here.