Neighbors accuse HOA board of intimidation in Laveen 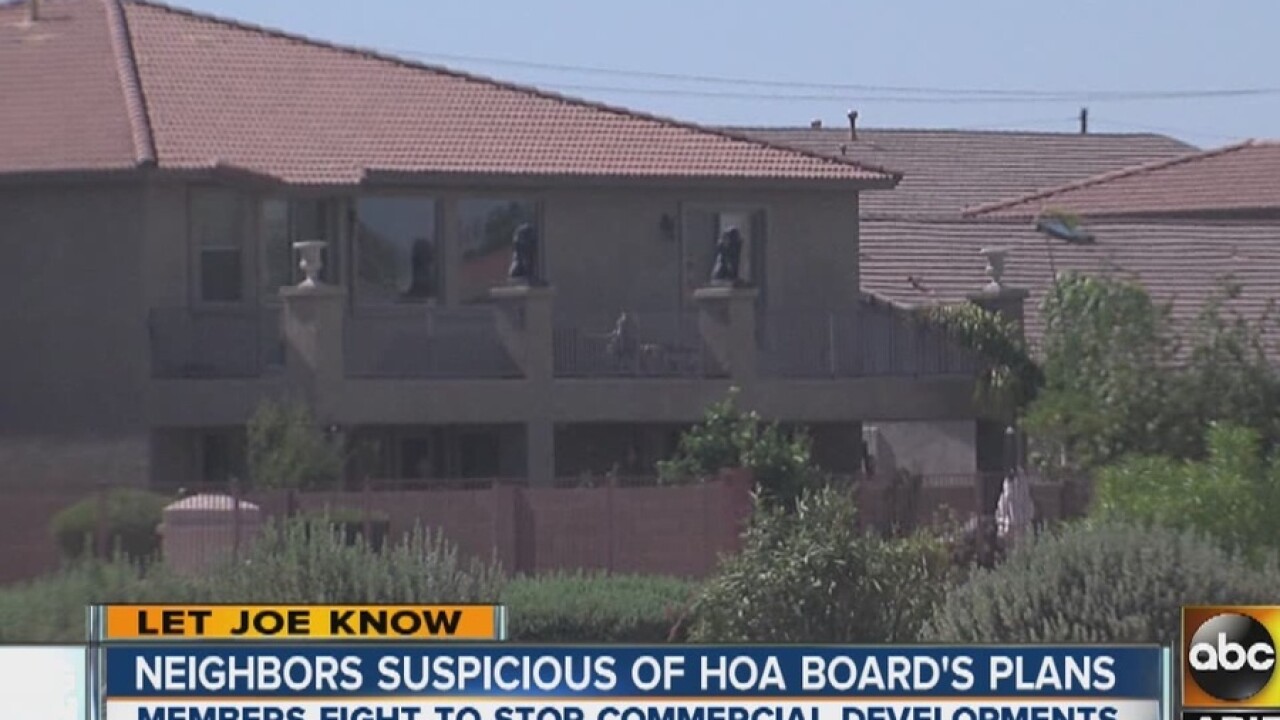 Homeowner associations make a lot of decisions about our neighborhoods, but what happens when you think the board is making the wrong ones?

Some residents told me they've been going round and round with some members of their board for years.

They live in the Cottonfields Community Association in Laveen. The subdivision shares common land and rules with Southern Ridge Golf Club.

They said one of those rules is that the surrounding land owned by the golf course be protected from commercial development.

But develop is exactly what they say the current course owner is looking to do.

It's a change that is supposed to require majority HOA members' approval, according to the community Covenants, Conditions and Restrictions (CC&Rs)

But homeowners I spoke to say an old board illegally changed the rules back in 2010, without a community vote.

Since then, different board members and homeowners have gone back and forth over the issue, with one board filing for the protections and another voting to remove them.

"It's set a precedent that we don't need a two-thirds vote of the majority. We just need three board members to do this," said resident Wendy Ensminger.

The current golf course owner Jaguar Premium Properties LLP said in court documents that prior to his agreeing to purchase the land, he was assured by community representatives that "they would act to remove" the protections. He has filed a counterclaim asking for damages.

It's one reason some residents fear the board will settle with the golf course and commercial buildings will follow.

A few began a petition to recall board members, and that's when they say things got ugly.

They accuse some board members and supporters of harassment while they tried collecting signatures.

Resident Wellengten Jenkins didn't believe it until a neighbor asked him to collect signatures.

"He said he was being harassed and he wanted to have show of force. I was like 'I don't think you're being harassed like that,'" he said. "That's when I see somebody pull up in a golf cart and pulls up right in front of (his neighbor's) golf cart like bumper to bumper."

And his neighbor caught it all on camera.

The cell phone video shows a man walking up to the golf cart Jenkins and his neighbor were in and said, "I understand you're out getting signatures again? And what's the purpose of that?"

Jenkins said he was shocked. "I was like wow this is really happening?"

In the end, residents got their signatures, but the court case continues on.

"There's a right way and a wrong way to do this, and how our board is proceeding is wrong," Ensminger said.

We reached out to each of the board members. Two got back to us. One said he's the only one in favor of letting the judge decide what rights the homeowners have. The other board member sent a statement disputing the allegations but declined to comment further citing the lawsuit.

If you think your HOA has violated state law or your CC&Rs and are thinking of taking legal action, the Arizona Department of Fire building and Life Safety is a good place to start.

It's a state agency designed to determine whether or not HOAs are operating within state law and CC&Rs -- without having to incur attorney fees. There is a filing fee of $750 for one violation and $2000 for multiple, but it's likely a lot cheaper than retaining a lawyer.

Find out how the process works here.

What do you think?