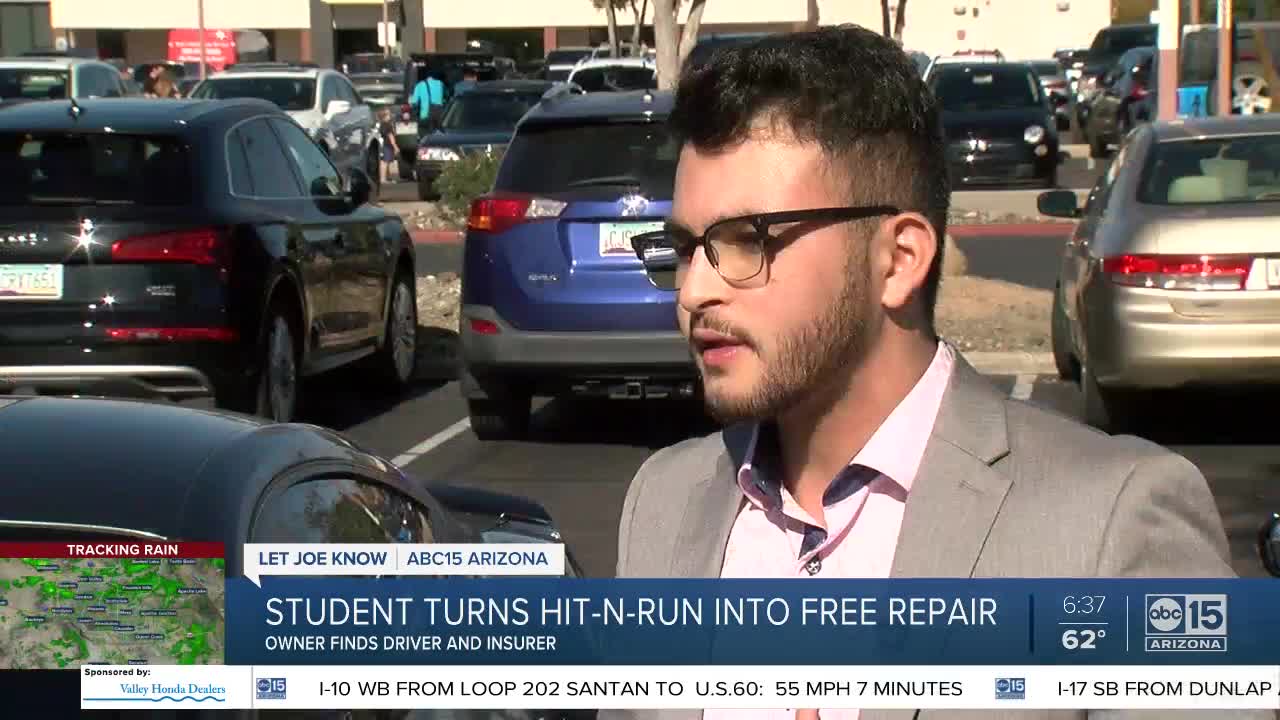 Have you walked out and found your car had been hit -- and there's no one there to tell you what happened? That's what a Valley college student faced -- and he refused to be a victim.

Have you walked out and found your car had been hit -- and there's no one there to tell you what happened?

That's what a Valley college student faced -- and he refused to be a victim.

What he did to find the driver -- and get his car repaired for free -- is a lesson for all of us.

Mohamad Abdallah's car was hit in a Scottsdale parking lot.

The first-year law student could only afford liability insurance, so he would be footing the bill for what turned out to be a $4,000 repair estimate.

But he was having none of that.

There was no driver, and he couldn't get any security camera footage.

Instead, Mohamad got lucky: an eyewitness left a note on his car.

She says she had pictures of the truck that hit him and the license plate.

With that, Mohamad went to his lawyer friend, Attorney Zayed Al-Sayyed.

The attorney's investigator took the plate number and found the driver's name and insurer, which was State Farm.

He tells me, "they reached out to the suspect and of course, he denied it."

So, he says, the insurer denied it as well.

It was for sure an uphill battle since he was not State Farm's customer.

But, what if the insurer had more proof?

Mohamad also now had the truck's Vehicle Identification Number (VIN). He put it in a Google search and found the car for sale on a nearby car lot.

So he went to the dealer, found the car and damage where he says it would have been on the truck's bumper.

Mohamad took a measuring tape and measured where the damage hits between the ground and the top. Then he compared it to his damage and says there was an exact match.

He filed a police report, but he says none of that changed the mind of the insurer.

He would still have to pay for damage he didn't cause.

He wanted to take his car to a shop of his choice.

Mohamad didn't give up.

He says State Farm eventually took full responsibility for repairs with his estimate.

He says being a student on a break allowed him to fully fight this, and he knows most of us don't have the time.

State Farm says they can't talk specifics because of privacy issues, but in a statement to us, State Farm says "when a third party makes a claim, we work with them to research the circumstances and gather supporting information to help us determine coverage. As facts are presented to us, we review them and may adjust our decision based on new information. It’s our goal to fulfill our obligation and pay what we owe.”

In a hit-and-run, with no witness, checking for security camera footage is important.

And don't take no for an answer.

If you're in the right, keep pushing.