Hacienda HealthCare: Renewed call for Hacienda board members to resign 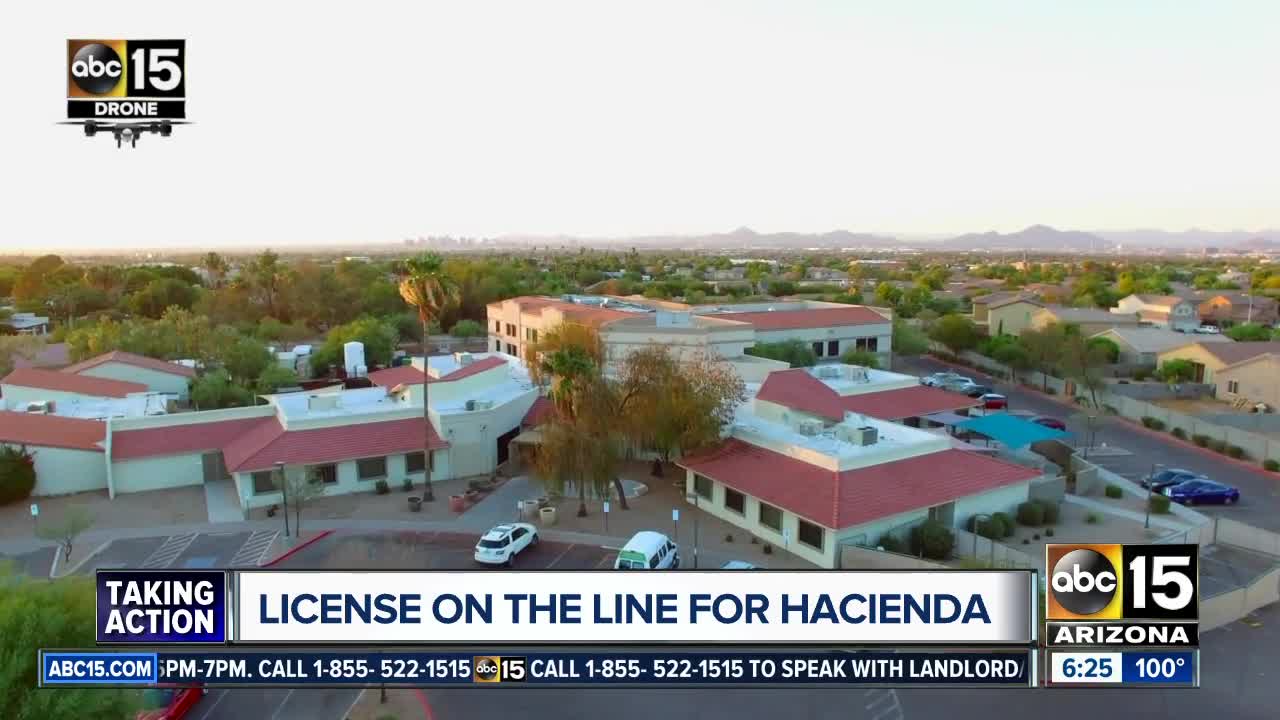 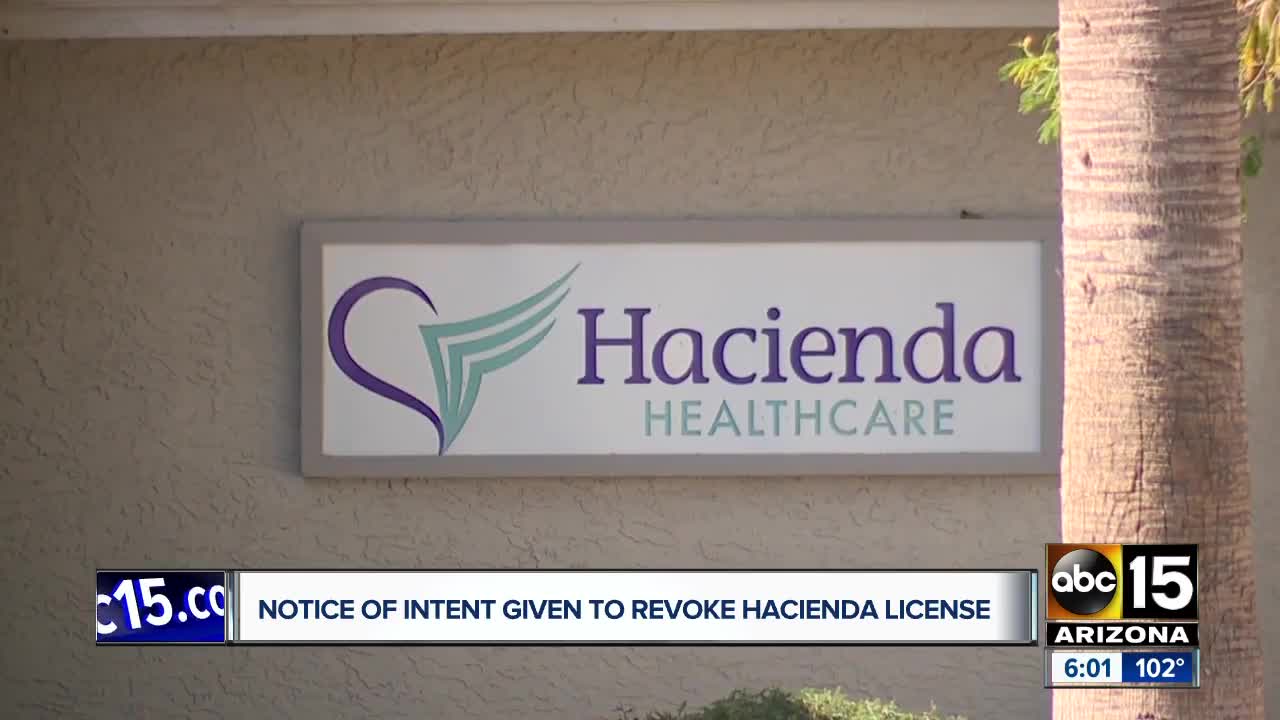 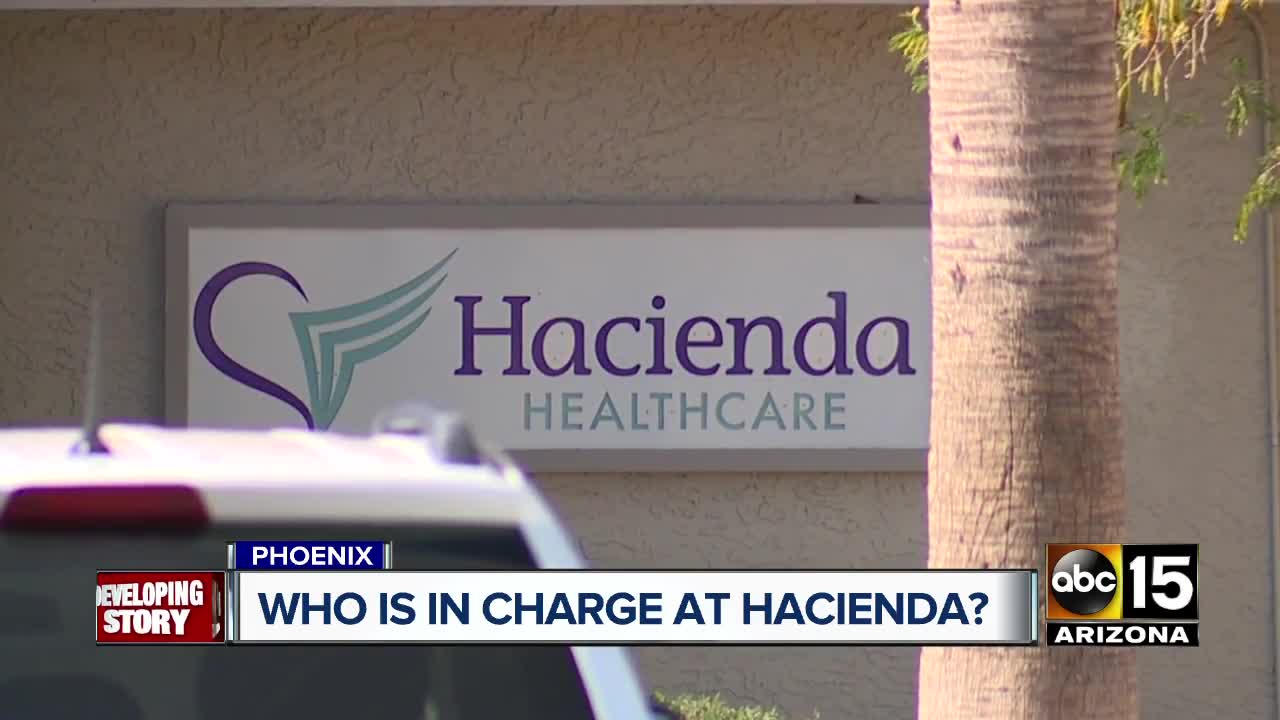 PHOENIX, AZ — Who is in charge at Hacienda HealthCare? It's the question on many people's mind after the healthcare facility is back in the spotlight after a new disturbing incident involving a patient.

A report that several maggots were found around the surgical incision of a 28-year-old male resident has sparked a new investigation and swift action by the Arizona Department of Health Services. On Friday, the department issued an "intent to revoke" Hacienda's state license that was recently issued to the facility.

However, on Monday, ADHS issued a statement indicating they want to do everything they can to keep the troubled facility open.

"Moving patients is our last resort, and every effort will be made to keep the patients in their home. In the event patients might have to be transferred, ADHS’ role is to ensure the facility continues to provide safe and therapeutic care until the last resident is placed in their new home," said Chris J. Minnick with the Arizona Department of Health Services.

The incident also has several Arizona lawmakers demanding answers and accountability. Hacienda is the same facility where a 29-year-old incapacitated woman was sexually assaulted last year. Police have arrested and charged Nathan Sutherland, a 36-year-old nurse, from the facility alleging he raped and impregnated the woman.

As Hacienda was making changes and trying to rebuild trust within the community, the new investigation has several lawmakers concerned and outraged.

State Senator Heather Carter co-sponsored Senate Bill 1211. The bill gives the state direct authority to go in and take action themselves, instead of just being an agent of the federal government.

Carter said she was "floored" when she heard about the incident involving the maggots.

"Absolutely floored. I have no words. It is unacceptable. We have to do something and that is what we're doing," said Carter.

Carter is also questioning who is really "calling the shots" at the facility.

"The oversight for this facility in terms of day to day operations - yes you have the staff - but ultimately the Board of Directors oversees it. All roads in both these cases lead straight to the board. All roads lead to the board," said Carter.

Carter said she echoes a statement made by Governor Doug Ducey in February, referring to the incident at Hacienda. In an interview with ABC15's news partner KTAR, Ducey said the system meant to protect vulnerable members in our community was not working.

"It's inherently broken and that's why I want to fire the senior management and remove the board. I think we've got good, hard-working employees in there that want to do the right thing, but this has just been terrible leadership, terrible management, and terrible oversight" said Ducey.

Since those strong words from the Governor, ABC15 has reported on several resignations and job terminations from Hacienda. From then CEO Bill Timmons, to chief operating officers, department directors, and several members of the non-profit organization's board of directors, some of them said they were stepping down because they felt "ineffective" as a board.

In an interview with ABC15, former board member Dr. Kevin Berger said he hoped other board members would follow suit and step down as well.

"Especially now with all the resignations, I think there is no other choice but to have everybody resign, to re-structure, and to start again. We have to hit a reset," said Berger.

A spokesman for Hacienda has confirmed that three original board members remain at Hacienda today.

Senator Carter is questioning why they are still there and why so many other seats remain empty months after the resignations of other board members.

"I think there's a tremendous concern with the board. The same board that was in place when the horrific rape of a vulnerable patient occurred is still in place now, when we have this second horrific situation. Something has got to be done," said Carter. "Right now there are so many vacancies on the board, I don't understand why they're not moving swiftly to fill those vacancies," she added.

Arizona State Senator Victoria Steele (D) from Tucson said she does not believe patients at Hacienda are safe.

Governor Doug Ducey's office issued a statement Friday, saying in part: "The care and safety of patients is a top priority. Our state agencies, including the Department of Health Services, the Department of Economic Security, and AHCCCS, are on-site to investigate. We are getting all the facts on this deeply disturbing allegation and we will take appropriate action to ensure accountability and the highest level of care for patients."

On Monday, Ducey issued another statement saying, "Arizona Department of Health Services is on the case, there's more that needs to be done of-course. The incident that's being discussed is something that we're certain can be fixed."

ABC15 reached out to Hacienda officials to get answers on the vacant board positions, and to request interviews with current board members who remain. All of our requests have been denied. A spokesman said, "I will let you know if my client chooses to offer answers."

Carter says at the end of the day, no matter what happened at Hacienda, all responsibility for patient safety lies with these three board members who are still in charge of overseeing the facility.

"Something has got to be done to add people to the board to make sure there is proper oversight of the day-to-day quality measures that need to be in place for the facility to be functioning," said Carter.

She added that she would like to see patient safety advocates, family members with loved ones inside the facility, healthcare experts, and those with first-hand knowledge of patient care included in the new board to oversee Hacienda.

Many in the community have been asking why this facility remains open. State officials say the answer is complicated. Many of the patients housed there are some of the most vulnerable and "medically fragile" people in our community. Moving them would be very difficult because there are not many places that offer the kind of care that Hacienda is equipped to handle. However, they say patient safety will be their number one focus as they determine how to proceed in light of the new investigation.

Carter tells ABC15 that if there are any families who wish to remove their loved one from Hacienda, the state will provide the necessary support to make it happen.

Hacienda has thirty days to respond to the Notice of Hearing. If Hacienda does nothing, their license will be automatically revoked on July 13 when the 30 days runs out.