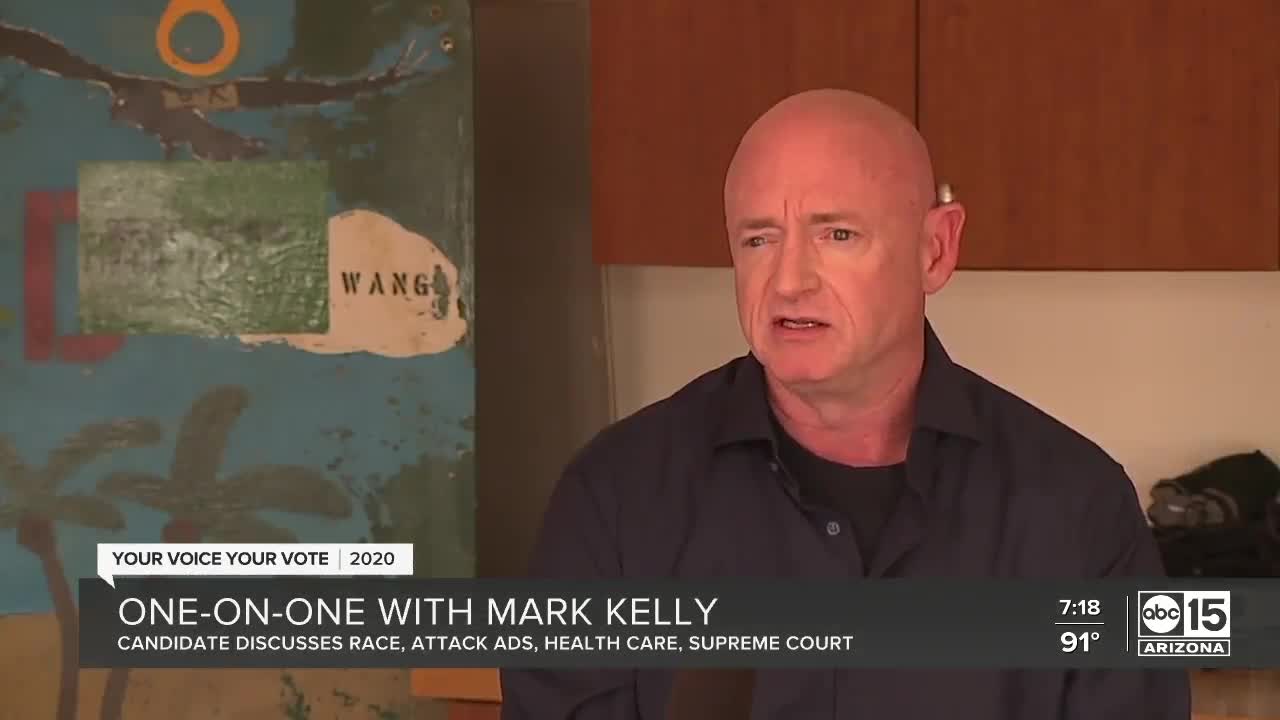 Mark Kelly discusses most controversial topics ahead of 2020 election.

PHOENIX — A new poll released Thursday shows Mark Kelly continuing to lead Senator Martha McSally in the Arizona senate race. Kelly went one-on-one with ABC15 on Thursday where he said he thinks folks are tired of the attack-your-opponent campaign style.

In a sit-down interview, Kelly said he never wanted to run a negative campaign.

“I’d rather lose than to do that,” he said. “I have tremendous respect for Arizonans, and especially folks who have to watch a lot of TV, and they shouldn’t have to see that from both sides and I think folks are tired of it,” he added.

The interview with ABC15 was shortly after the McSally campaign criticized a member of Kelly’s campaign staff for an alleged social media post this past summer, labeling police officers as "worthless ****ing pigs" while sharing a video of Chicago police during a protest.

Kelly, the son of two police officers, tells us he learned of the post Thursday morning and described the man as a "young staffer" who has been disciplined.

ABC15 also asked Kelly about a recent attack ad that alleges Kelly is insensitive to women.

“It’s not true,” said Kelly. “But the thing I think is really important to understand also is, I’m tough. I know what I’m getting myself into. I mean, nobody knows how tough this business is more so than my wife Gabby and me, and I knew to expect that from Senator McSally.”

Kelly said he wants to focus on issues like healthcare, costs of prescriptions, education, climate issues, border security, immigration, and so many other issues.

He calls healthcare unaffordable for so many Arizonans — Kelly wants a competitive marketplace, and we asked him who will pay.

“That’s the thing right, that’s always the big question, but allowing a public option where folks pay for insurance that could bring down the price in places where there is little to no competition on an exchange,” he said.

We also asked Kelly about leading the polls, and if he’s paying attention to them.

“I will be paying attention to the polls on Election Day, and you know we're working hard. I’ve looked at this year and a half as kind of like flying the space shuttle. There’s the beginning part, there’s the middle, there’s the end -- when you get to the end you don’t want to make a lot of mistakes. It's OK to make small mistakes, pay attention to the detail, work hard, make sure you’re getting your, in the case of the election, you’re getting your message out, encouraging people to vote.”