The assassination of an armored car guard in Ahwatukee in 2004 still generates weekly leads as the FBI continues its search for a 'Top Ten' wanted fugitive.

The murder of an armored car guard in Ahwatukee in 2004 still generates weekly leads as the FBI continues its search for a 'Top Ten' wanted fugitive.

Brown ambushed Palomares shooting him five times in the head

It was just after 10 a.m. on November 29, 2004, when Keith Palomares, 24, was transporting $56,000 in cash from an AMC theater in Ahwatukee to the Dunbar armored car parked nearby. The suspect, later identified as Jason Derek Brown, ambushed Palomares, shooting him five times in the head with a .45 caliber handgun, in a manner the FBI describes as 'an assassination.' Palomares' gun was found at the scene, but he was shot before he had time to defend himself.

After grabbing the money bag, Brown fled on a BMX mountain bicycle, then ditched the bike for a silver BMW convertible he had parked nearby.

Witnesses would tell police that they saw the BMW in the parking lot during the weeks before the robbery. On December 1, the police and FBI received information that a man, matching the description of the murder suspect, had been staying at a hotel in Chandler from November 25 and left abruptly on the day of the crime. That person was seen driving the same silver BMW M3 and identified as Jason Derek Brown, age 39. Brown checked into the hotel listing his contact information as being from Salt Lake City, Utah. A fingerprint lifted from the BMX bike matched Brown, and police found out that he recently bought a gun and ammunition that matched the type of weapon used in the murder. Brown was quickly labeled as the suspect in the robbery, and the murder of Keith Palomares.

The Suspect: Jason Derek Brown was born on July 1, 1969. He speaks fluent French, has a Master's degree in international business and enjoys outdoor sports like golf, snowboarding and dirt biking. Brown was a member of The Church of Jesus Christ of Latter Day Saints and completed his Mormon mission near Paris, France. 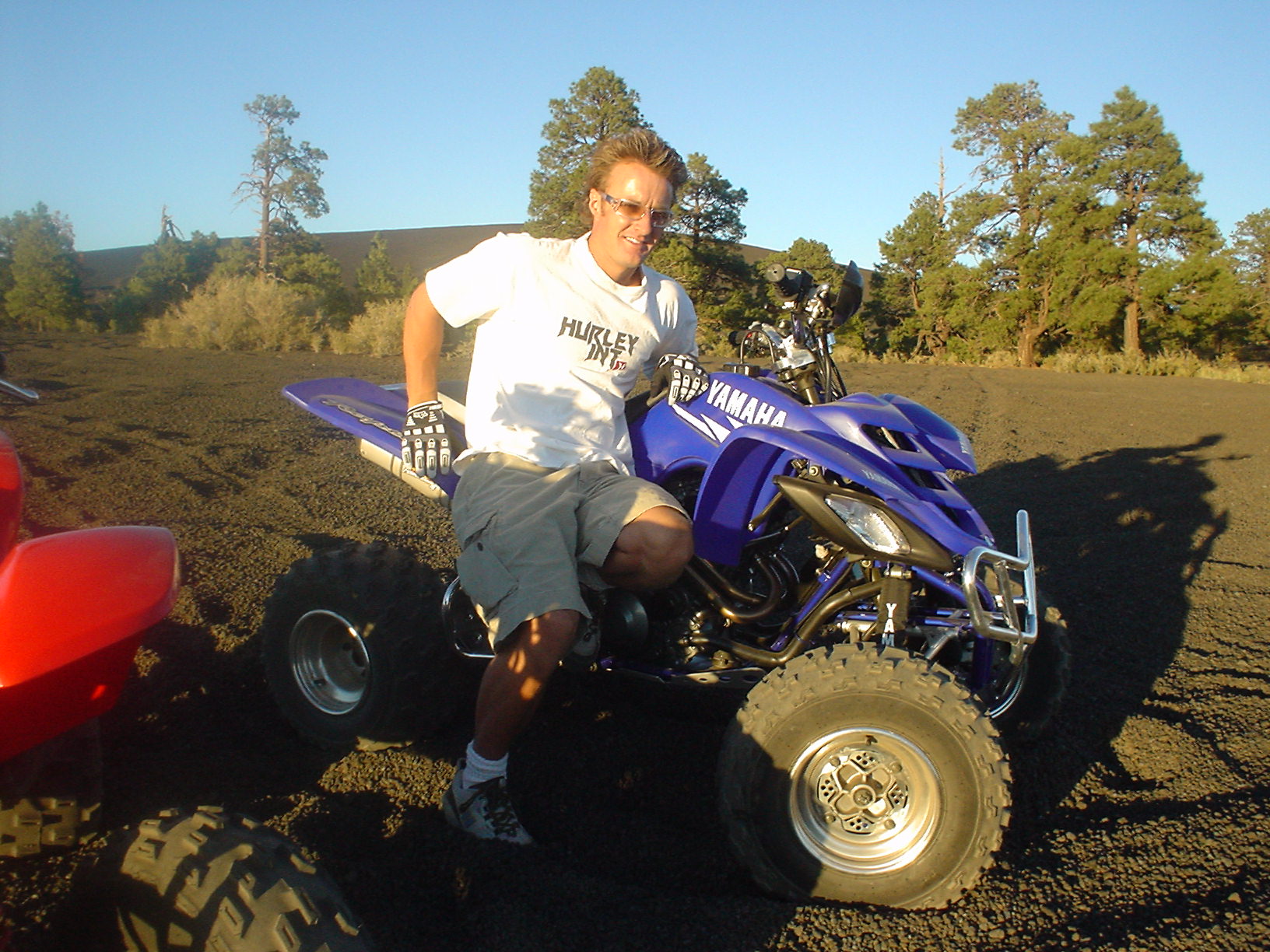 The FBI says he has ties to Utah, California, and Arizona but has also traveled to Mexico and France. He enjoys the high life, showing off expensive vehicles and boats and going to nightclubs. Brown would usually scam people out of money, posing as an international businessman, usually a golf equipment importer.

FBI Supervisory Special Agent Lance Leising has been working on the Brown case since it began twelve years ago. He describes Brown as an "unusual character," saying, "It's not often you see somebody that had that much going for him and that much support, turn to this life of crime."

The Initial Search: After the robbery and murder, Brown quickly made two bank deposits, on November 30 in Henderson Nevada and another the following day in Laguna Niguel California, South of Los Angeles. While in Nevada, Brown changed vehicles leaving the BMW there, before going to California. Authorities in California came close to getting Brown when they raided a house there, just missing him by a couple of hours. This raid would end up being their best chance so far at arresting Brown.

From California, it appears that Brown made his way to the Pacific Northwest where authorities found an abandoned Cadillac Escalade belonging to Brown at the Portland International Airport. They believed the Escalade was dropped there in mid December and found on January 18, 2005. They also believe that Brown mailed a package from there to relatives in California. 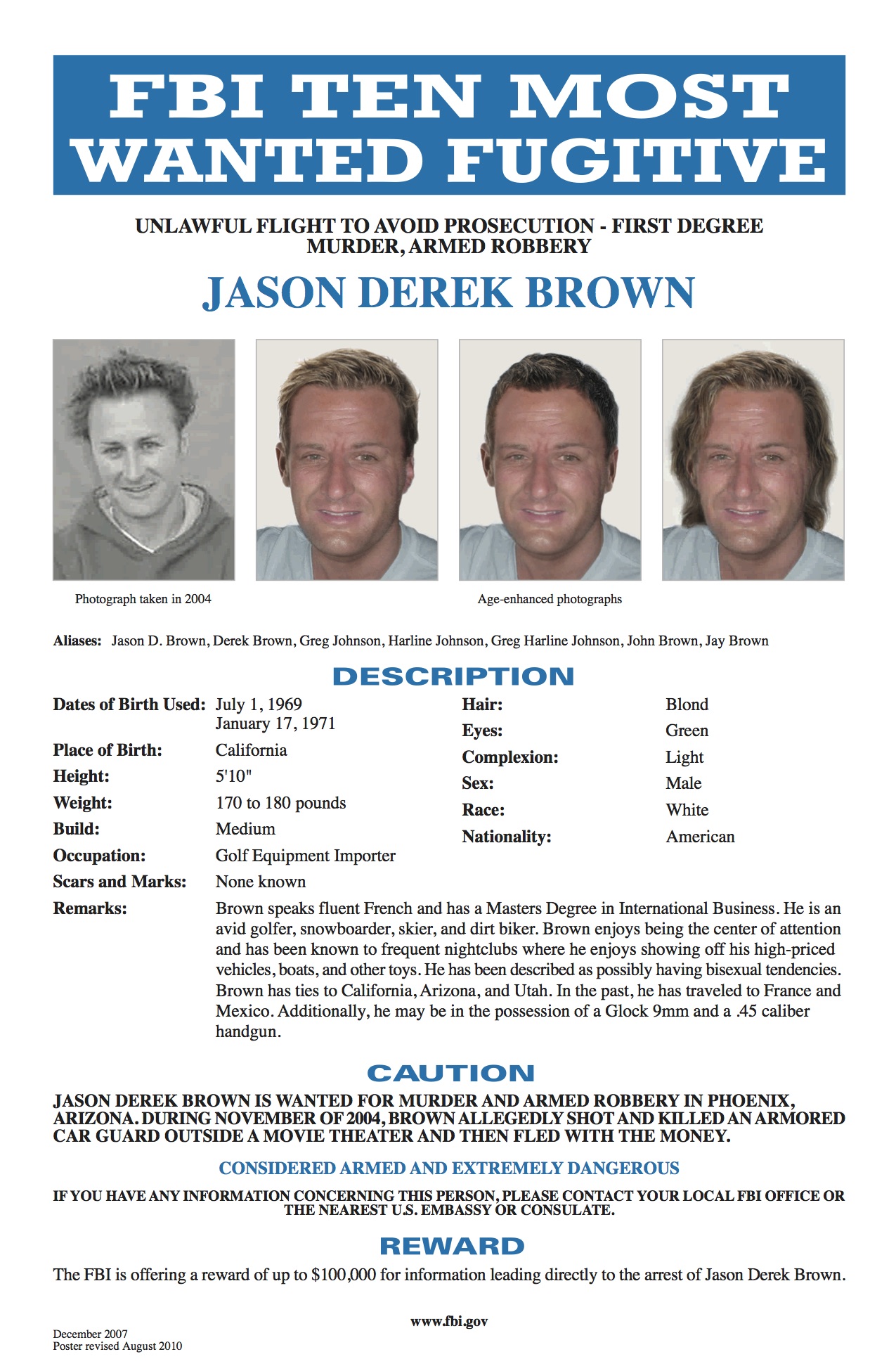 On December 4, 2004, an arrest warrant was officially issued for Brown, and he soon became the 489th person to be placed on the FBI "Ten Most Wanted List." Since 1950, of all those on the list only 31 have not been located.

David Brown, Jason's brother, pled guilty of providing false statement's to investigators as they were searching for Derek in the immediate days after the crime. FBI agent Lance Leising, "David knew exactly where the BMW was. He kept that hidden from us and, in fact, took it, cleaned it out completely and brought it back (from Nevada) to California, where he tried to conceal it further."

He also knew of storage lockers Jason had in Las Vegas but lied about it when questioned by the FBI.

He was given three years supervised probation for providing false information to authorities.

FBI agent Leising says they have received over 10,000 leads regarding Brown over the years and the search is far from over. "It's definitely an active investigation; we still get 5-6 tips a week." The FBI says they 're-scrub' this case often and have posted Brown's DNA profile on law enforcement databases around the world. Leising says "If he crosses any of those databases, we're going to find him."

Authorities still get 5-6 tips a week

Authorities believe he is going by a different name, using one of his many government-issued fake ID's and probably has returned to using and scamming people to make money. "His background allows him to fit into multiple cultures, multiple areas and multiple countries," said Agent Leising.

Meanwhile, the FBI continues to track down leads as the family of Keith Palomares waits for justice.

"I would like to find that for Keith and his family," Leising vowed, "We'll keep looking, we're not going to stop."

The FBI is hopeful that national and international exposure will bring Brown to justice.

If you have any information regarding the current whereabouts of Jason Derek Brown you can leave an anonymous tip at 1-800-call-FBI or FBI.gov. A reward of up to $200,000 is available for information leading directly to an arrest.