PHOENIX — At least four restaurants in the greater Phoenix area have closed their doors in recent weeks, and another announced that it would temporarily close at the end of the month.

Editor's note: We added a few more restaurant closures that we previously reported on to the end of the article.

After 20 years on Tempe's Mill Avenue, Gordon Biersch, the brewpub known for its German-style lagers, reportedly closed its doors last week, according to Mouth By Southwest, an online blog that covers restaurant news primarily in the East Valley. That location opened in 1998.

In an emailed statement to ABC15 on Tuesday, Josh Kern, chief experience officer at CraftWorks Holdings, which owns Gordon Biersch and a number of other restaurant brands, said it was "purely a business decision as we continue to focus on other locations throughout the country."

"We appreciate our raving fans of the brand and we certainly enjoyed operating the restaurants in Arizona," his statement continued "We continue to be optimistic about the future of Gordon Biersch and are pleased with recent progress made on several growth initiatives that we believe should have a meaningful impact on our business."

The closure leaves two restaurants in Arizona -- one near the Westgate Entertainment District in Glendale, and the other at SanTan Village in Gilbert. As for whether or not those restaurants would close or were at risk of closing, Kern said: "At this time, no other changes."

The Arizona Republic reported that the restaurant chain closed its Scottsdale location in April.

After nearly seven years in business, Pig and Pickle abruptly shut its doors in Scottsdale in July.

"We're sure you have heard the news... it is with a heavy heart that we announce that we have officially closed our doors after almost 7 years in business," said a July 10 post on the restaurant's Facebook page.

"For nearly 7 years, we have been able to bring food & drink to our restaurant, and create an amazing community. From amazing milestones like birthdays, weddings, engagements, gender reveal parties, & anniversaries, and special date nights, I want to humble thank you all for supporting my dream," read another message, attributed to Keenan Bosworth, the owner of Pig and Pickle.

"To my employees who have worked so damn hard to make this dream come together, as well as the loyal guests and friends of Pig & Pickle, I cannot begin to thank you for what you have done to bring this dream to life, as well as teach me about myself.”

Mouth By Southwest reported that the restaurant was locked out of its space for being in default of its lease agreement.

"We've had a fantastic time helping celebrate birthdays, anniversaries, weddings and just 'good times' with all of you and thank you for your support and loyalty," the restaurant said in a July 11 Facebook post, while announcing that the Scottsdale location would close later that week.

It was known for the "Brady Burger Burger Challenge," a hefty food challenge. Customers were tasked with devouring the Brady Burger -- three 1/2-pound patties, pulled pork, jack cheese, jalapeno cole slaw, BBQ Aoli -- a pound of fries, and a half pint of beans in 45 minutes or less.

Those able to tackle the challenge got the meal for free. Those that failed had to pay $35.

The Phoenix restaurant announced in a July 3 Facebook post that it would be "temporarily closing down as we look for a new location to call home" after the property was apparently sold.

"The property has been sold and the new owners are looking to take things in a new direction and have asked us to leave by the end of the month. We are working hard towards finding a new home ASAP and we appreciate all the love and support we have received from you over the last five years," the post said.

There are a handful of business cottages behind ThirdSpace, including Novel Ice Cream. Reached via Facebook, owner Brandon Douglas said his ice cream shop would not be closing.

"Each business that leases space on the property is individually owned and operated so we can only speak to our own situation," he said in a Facebook message. "Fortunately we will be staying in our current location. However, we will miss our neighbors at Thirdspace very much. They have been wonderful to us over the past two years and are one of the main reasons we decided to open our shop where we did. We will be encouraging all of our customers to support Thirdspace at their new location once they secure it."

Varsity Tavern and Rodeo Ranch, both located off Mill Avenue, closed their doors at the end of June, according to a media statement posted to a window on the building. Beside it, was a notice from the Arizona Department of Liquor Licenses and Control, dated July 2, 2019, that states that their liquor licenses had been suspended indefinitely.

"Varsity Tavern's No. 1 concern is the safety of patrons. Due to an unfortunate and unexpected incident that happened at Varsity Tavern on Saturday, June 29, 2019, we will be closing our facility indefinitely," the statement said.

According to Varsity Tavern's statement, a customer climbed over a railing on the second floor, jumped to the ground, and was injured.

"For this reason, our building will be temporarily closed pending the conclusion of this investigation," Varsity Tavern's statement said. "We look forward to reopening as soon as possible."

Tempe police, in a statement, said bicycle officers were patrolling Mill Avenue around 1:30 a.m. on June 29, 2019, and found a man on the ground. According to Tempe police's investigation, it appeared the man had fallen from the balcony.

Alcohol was a factor in the man's fall, police said. He was transported to the hospital with life-threatening injuries, police said.

ABC15 has reached out to a spokesperson for the Arizona Department of Liquor Licenses and Control for more information, but an email indicated the spokesperson was out of town. We have not yet heard back from the department regarding the investigation. 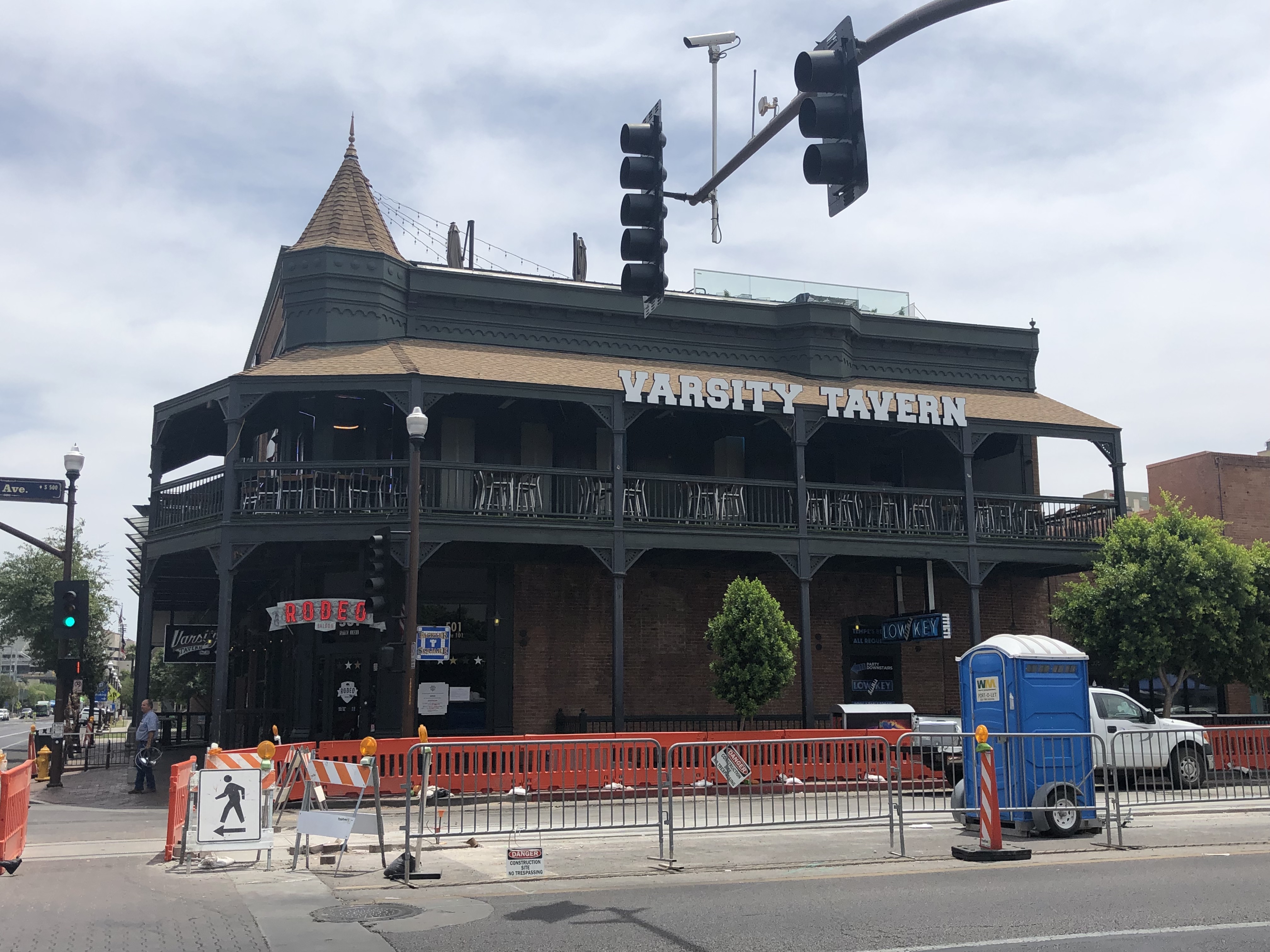 Other notable restaurant closures this year include Hatter and Hare, Old Town Gringos, and Camp Social. The three concepts -- all from Glass Half Full Hospitality -- abruptly closed within weeks of each other.