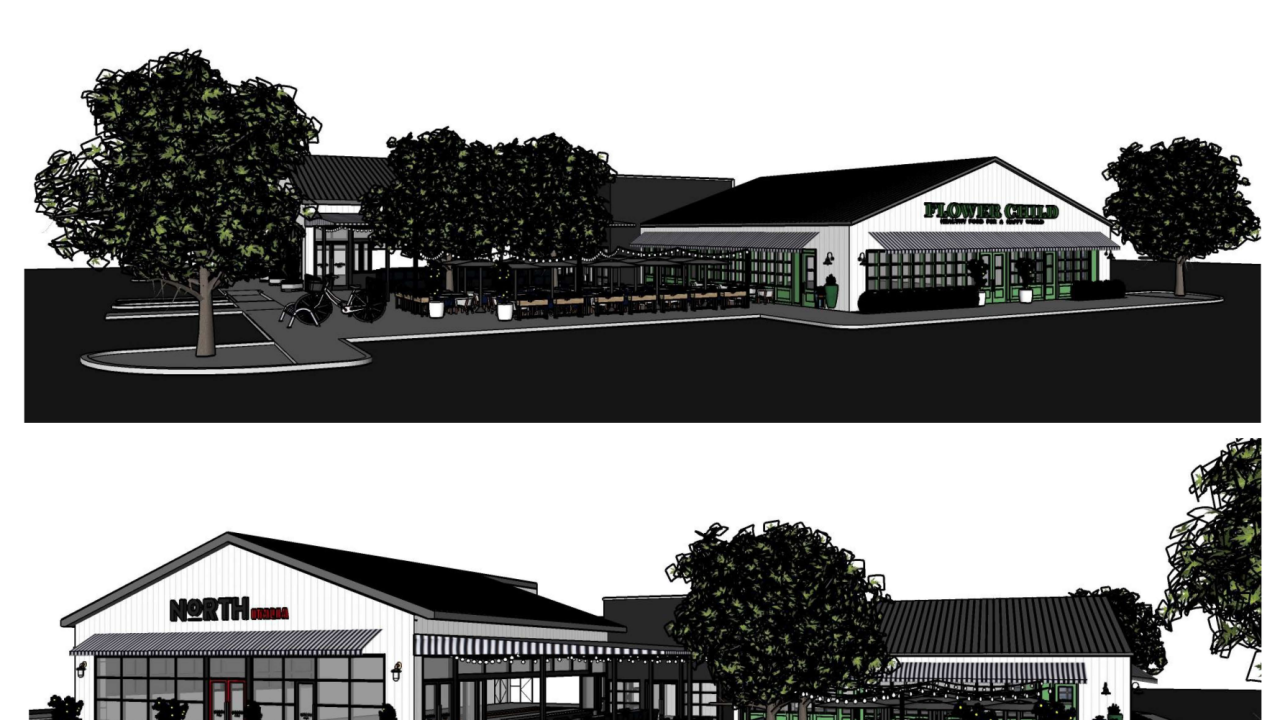 GILBERT, AZ — When it was announced that Sam Fox's restaurant empire, Fox Restaurant Concepts, had been sold to The Cheesecake Factory over the summer, Fox teased in an interview that more restaurants were expected to open in the Phoenix area, specifically Gilbert.

Now, we're learning a little more about which restaurants are headed to the East Valley. And where.

According to a proposal filed with the Town of Gilbert that is scheduled to be reviewed on Wednesday, Nov. 6, by the planning commission, Fox Restaurant Concepts is planning to open North Italia and Flower Child on the northwest corner of SanTan Village Parkway and Williams Field Road near Living Spaces and Fire Birds Wood Fired Grill in the SanTan Village area.

Both concepts would run as independent restaurants, but would share a 10,949-square-foot L-shaped building and a 3,239-square-foot patio, according to artist renderings and building plans included in the proposal.

It is not yet known when construction is scheduled to begin nor when both restaurants are anticipated to open.

ABC15 has reached out to spokespersons for Fox Restaurant Concepts and both restaurants, but no information was immediately available.

In April, Culinary Dropout at The Yard, another Fox Restaurant Concept, opened a 25,000-square-foot restaurant in downtown Gilbert, its fifth location in the Valley. Still, Fox has a couple of other projects in the works.

Blanco Tacos & Tequila, his Mexican concept, is currently under construction in downtown Phoenix where it will be part of the "Block 23" development that is anchored by the recently-opened Fry's grocery store. An opening date has not yet been announced.

Fox also has plans to build a five-story boutique hotel near 44th Street and Camelback Road. The hotel will be part of a $300 million multi-use project by RED Development that includes the new training facility for the Phoenix Suns and Phoenix Mercury, office space, restaurants and shops, a self-storage facility, and office space.

“I’m dedicated to helping curate a corner so long overlooked in our community,” Fox said in a previous statement about the hotel development. “To be a part of RED Development’s comprehensive development project including the Phoenix Suns and the Mercury, where the vision plays on the greatest strengths of Phoenix and Arcadia, is exciting for a local guy like me. I’m excited to lend my attention to detail, contributing to a quality project for a neighborhood I love.”

Construction on the multi-use development is expected to begin next summer, according to a news release.