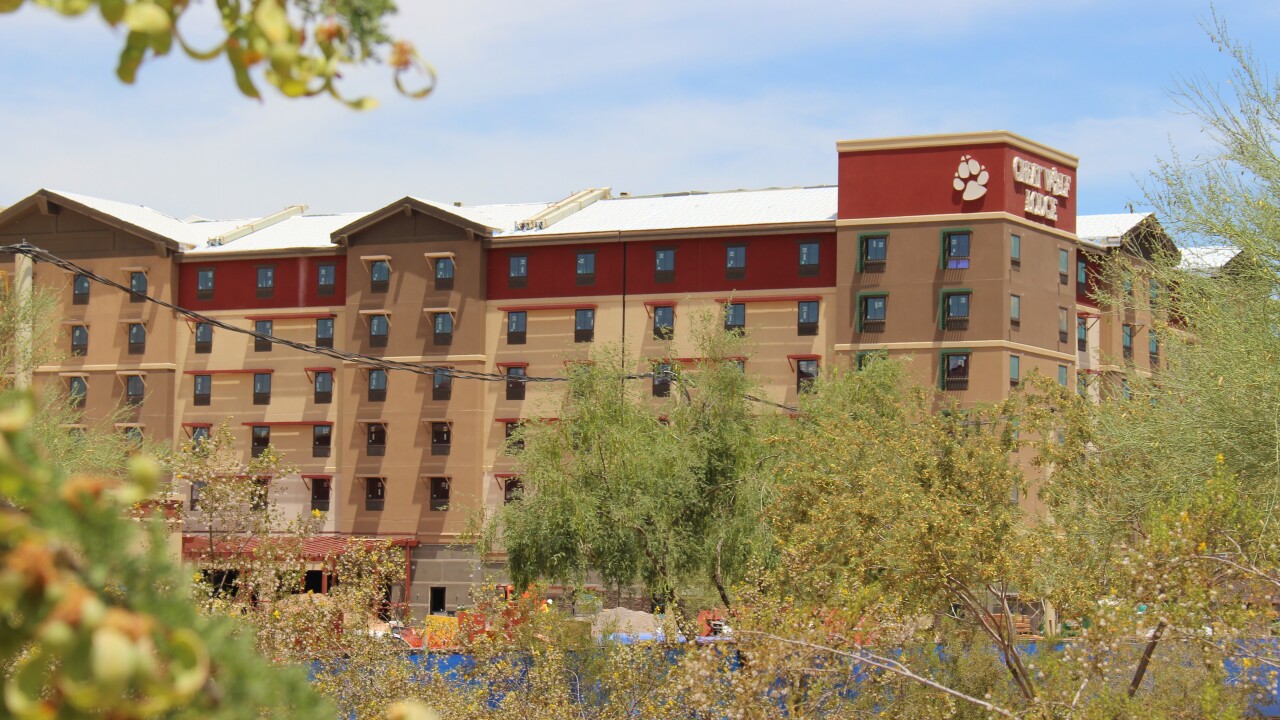 Josh Frigerio, ABC15
Officials with Great Wolf Lodge, the indoor water park and 350-room resort being built within the Talking Stick Entertainment District, held a construction tour for media members on Tuesday, June 11, 2019. At the tour, the CEO announced that the resort would open on September 27, nearly three weeks earlier than previously announced. It will also debut a new water ride, called &quot;Diamondback Drop.&quot;

TALKING STICK ENTERTAINMENT DISTRICT, AZ — After surprisingly delaying its opening due to construction issues less than two weeks ago, Great Wolf Lodge said Tuesday that its indoor water park and resort in Arizona would open and welcome its first guests on Friday, Sept. 27, 2019.

The 350-room resort has been under construction for the last year within the Salt River's Talking Stick Entertainment District near the Loops 101 and Talking Stick Way, across from Salt River Fields at Talking Stick. It is believed to be the first indoor water park in the state.

It was initially expected to open in October, but earlier this year officials moved the opening date up twice, most recently to Sept. 18, 2019, citing construction crews reaching milestones at a fast pace. Then, days before it was expected to open, the opening was pushed back indefinitely. Officials said there was a shortage of electricians in the area to complete the needed work.

"We hold ourselves to a high standard of excellence and won’t compromise the guest experience, so we decided to move the opening day in order to complete the remaining work and to offer adequate time for in-resort training for our pack members once that work is finished," the resort said in a statement at the time.

The resort is arguably one of the most anticipated entertainment openings in the Valley this year.

When it opens, it will boast an 85,000-square-foot indoor water park with 13 slides, including the "Diamondback Drop," which will only be at the Arizona resort; a play structure with a 1,000-gallon bucket that dumps water every few minutes; a lazy river; wave pool; and an outdoor pool. It will also have the Great Wolf Adventure Park, a 27,000-square-foot "dry" park with a ropes course, miniature golf, a small bowling alley, and "MagiQuest," an interactive game.

The resort will also be home to the state's only Ben and Jerry's ice cream parlor, and a number of sit-down and casual restaurants, bars, and other dining options.

A grand opening celebration is expected to happen in October, though an exact date has not yet been announced.

Other attractions that have opened this year include Medieval Times, which is located just down the street; The Crayola Experience at Chandler Fashion Center mall in Chandler; KTR, an indoor skateboarding, trampoline, and BMX park in Scottsdale; and the first phase of Gilbert's Regional Park in Gilbert.

Another anticipated opening in the area is White Castle, which is set to open its first restaurant in Arizona on Wednesday, Oct. 23, 2019, near the Loop 101 and Via Day Ventura.