Demolition begins on Scottsdale's Papago Plaza redevelopment: What we know about the project 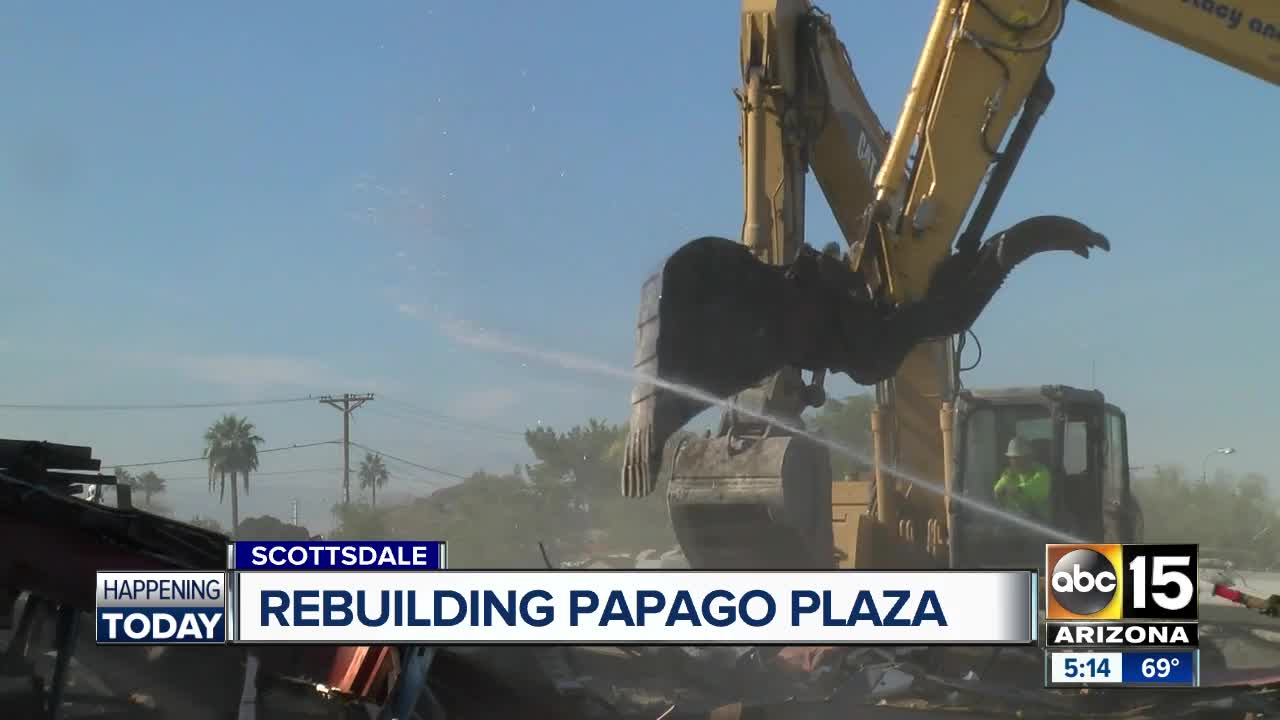 After years being vacant and surrounded by fencing, the demolition of Papago Plaza in Scottsdale has begun. The shopping center is going to be turned into a mixed-use development with restaurants, a hotel, a grocery store, and luxury apartments.

SCOTTSDALE, AZ — Two years ago, businesses began shutting down inside Papago Plaza, such as Papago Brewing, after the 60-year-old Scottsdale shopping center was sold and slated for redevelopment. Then construction fences were placed around the perimeter of the center, where it was left seemingly vacant and undisturbed.

In August, it was revealed that the 11-acre shopping center would be turned into an urban mixed-use development with high-end apartments, restaurants, a grocery store, and a hotel. It was also announced that the Papago Plaza name would stay.

On Thursday, the developer, Lee Mashburn, Scottsdale Vice Mayor Kathy Littlefield, city council members, and other officials, held a ceremonial groundbreaking event at the shopping center, where demolition had already begun on the northwest end. After the ceremony, reporters were allowed to watch as construction crews knocked down one section of the shopping center.

"To me, it's an auspicious occasion because it seems like we've been working on this project for a long time," said Mashburn during the ceremony. Mashburn is the president of Pivot Development, a development company in Scottsdale.

He said discussions about buying the development started in 2013 and the initial plan was to simply put a new face on the shopping center and bring in new tenants, but "through changes that have been brought on through the internet...the retail world is changing so we looked at the possibility of doing a mixed-use deal essentially to complement what's going on at [ASU] Sky Song."

At the groundbreaking, we learned how long the project is expected take to complete and a couple of the specific tenants that are anticipated to be part of the development.

WHO WILL BE PART OF THE DEVELOPMENT?

According to Mashburn, Starbucks, Wells Fargo, a SpringHill Suites hotel, and Aldi have signed on to be part of the project.

Alliance Residential will have 276 high-end apartments, he said.

As for restaurants, he said he has been in talks with "50 restaurants", but was not yet able to announce anyone specific.

He said the project would be completed in two phases.

Aldi has not officially announced any of its suspected Arizona plans, though building permits and applications have been filed in cities and towns throughout the Valley. A spokesperson for the City of Goodyear, where Aldi bought 69-acres of land to build a 600,000-square-foot distribution center, said the company was redesigning its facility and that the project could still be "several years out."

The development will have an orchard-like setting with the centerpiece being a park with benches, Wi-Fi, and a fountain in between nearby buildings, according to the renderings and information released in August. The design is described as mid-century modern.

"We're not developing a strip center or a bunch of PADs on Scottsdale Road. We're developing a sense of place. And I'm very proud of that attitude and accomplishment," Mashburn said at the groundbreaking.

In an interview with reporters, he said the wooden beams that adorn the awning on parts of the original shopping will be re-purposed in the new development. He also said the plaza would keep the Papago Plaza name, and that the Kachina on the plaza sign off McDowell Road would be part of a mural when the plaza is completed.

"Keeping the name, the Papago Plaza name, was important to tell the legacy of the project. You gotta respect that. It's been here for 60 years," he said.