Creepy! The story behind the 'bathe in my milk' flier spotted in Phoenix

It's creepy and weird. Let's get that out of the way first. But, more importantly, what is it? How did it get here? And is it real?

It's creepy and weird. Let's get that out of the way first.

But, more importantly, what is it? How did it get here? And is it real?

On Monday night, a Reddit user named "justafreespiritthere" posted a horror-worthy photo in the Phoenix subReddit of a flier apparently advertising services to "BATHE IN MY MILK."

The flier shows photos of men each sitting presumably undressed in a bathtub as an older woman stoically stares into the camera. The offer is "open to men only," includes a choice of "soy, almond or traditional" milk, and people can even use the woman's sponge. 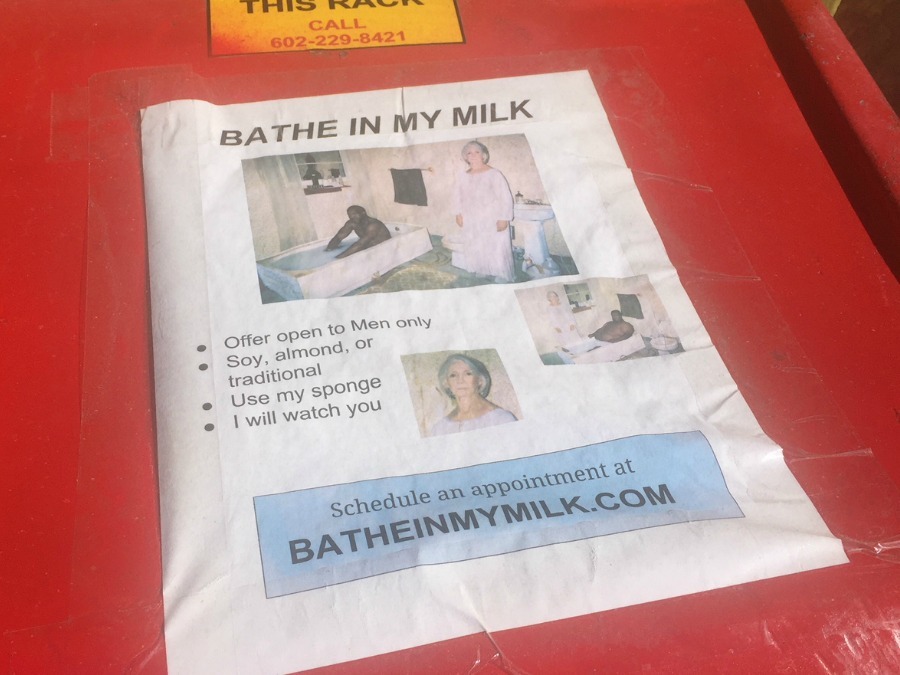 "I will watch you," the flier reads, while also referring people to batheinmymilk.com to book an appointment. (Fair warning, the website is safe for work, but you probably shouldn't look at it on a work computer.)

Out of pure curiosity, we sent one of our digital reporters to downtown Phoenix to see if we could find the same flier. We did.

The flier was taped to the top of a newspaper rack outside a business near the intersection of Grand and 11th avenues, and Filmore Street.

Two of the business' employees told our reporter that they were unaware that the flier had been posted, but found it humorous.

One look at his Facebook page and Instagram shows that he has created a bunch of odd fliers and websites before. Some of the more peculiar fliers advertise medical help for "belly button constantly bleeding," a flier to locate a found pigeon that "obeys no commands (very poorly trained)," and another seeking feedback on lotion with bags filled with a substance stapled to it.

Oh man... What a way to seek feedback on your lotion! . (made for @superdeluxe)

According to an interview with the New York Post in December, Wagner said he came up with the idea after a beverage company tasked him with creating a meme that would promote their drink and make it go viral. The idea was rejected, according to the Post's article, because it was "too quirky."

Wagner also told the Post that he was surprised the fliers went viral, saying his website had more than a half-million hits after a week, as of December. ABC15 reached out to Wagner, but has not heard back.

Wow! Do you believe it!? . (made for @superdeluxe)