13 years after they were stolen, Dorothy's ruby slippers have been found, the FBI says 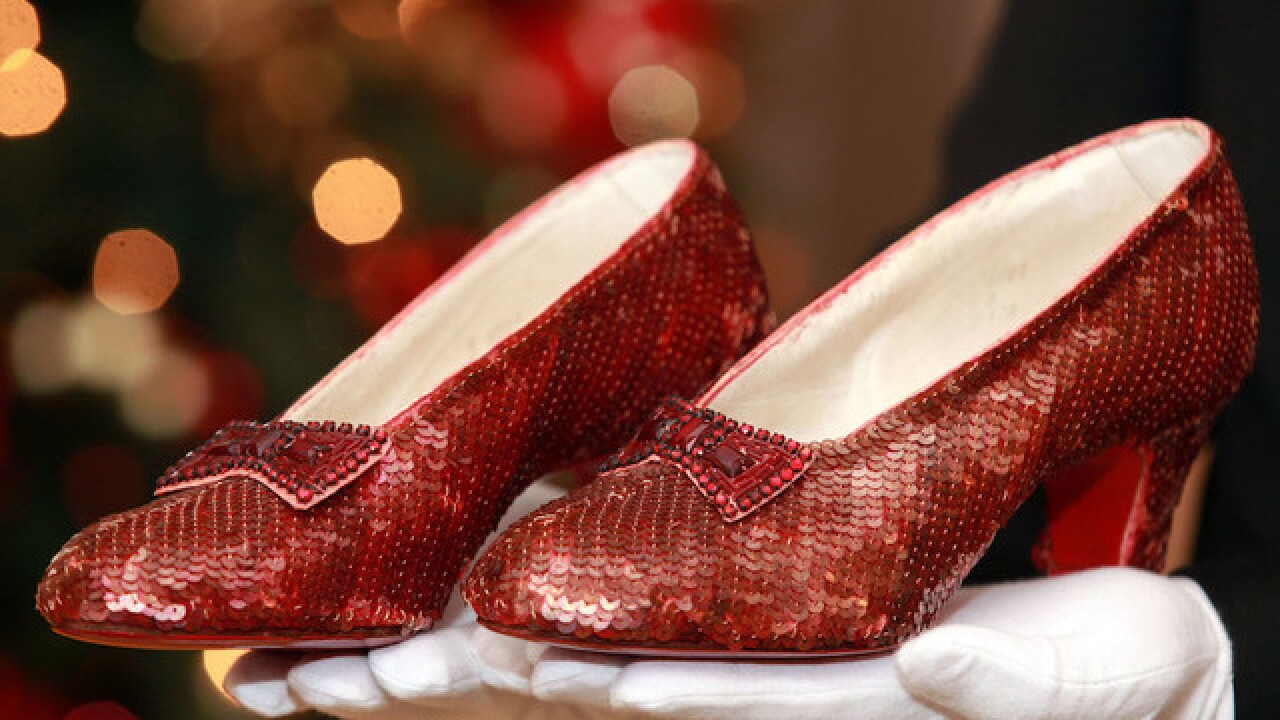 Copyright Getty Images
Astrid Stawiarz
<p>'The Wizard of Oz' Ruby Red Slippers worn by Judy Garland in 1939 are displayed at a viewing at the Plaza Athenee on December 5, 2011 in New York City. </p>

Glinda, the Good Witch of the South in "The Wizard of Oz," says it best when she describes the appeal of those ruby red slippers to the Wicked Witch of the West:

"Their magic must be very powerful, or she wouldn't want them so badly."

And so, for 13 years, the fate of a missing pair of red sequined slippers worn by actress Judy Garland as Dorothy has eluded law enforcement. But there's no place like home, as they say, and the shoes have been found, according to the FBI.

On Tuesday afternoon, authorities intend to reveal details of the shoes' recovery at the FBI Minneapolis headquarters. It's unclear where they could end up or if anyone will be charged.

The shoes are one of four known pairs that Garland wore as Dorothy in the 1939 film. The shoes disappeared in the middle of the night in August 2005 from the Judy Garland Museum in the actress' hometown of Grand Rapids, Minnesota.

"The biggest thing that ever happened to our museum was getting the slippers stolen," museum co-founder Jon Miner told CNN affiliate KQDS in 2015. "We were literally crying."

Since then, rumors swirled among residents and memorabilia collectors about where over the rainbow they could be. Valued at $2 million to $3 million, and thought to be able to fetch up to $5 million at auction, they would be hard to sell on the black market, and even harder to hide.

"Whoever has them, illicitly, has their hands full with them," journalist Rhys Thomas said in the 2016 documentary, " The Slippers ."

"One way or another, over the course of time, the shoes will out you," said Thomas, who tracked down several pairs of the famed shoes for a Los Angeles Times article published in 1988.

Memorabilia collector Michael Shaw loaned the slippers to the Judy Garland Museum for Grand Rapids' annual "Wizard of Oz" festival in 2005. Shaw rejected the museum's offer to store them in a vault each night because he didn't want people handling the delicate shoes by moving them daily, he said in the " The Slippers ." "But most importantly, I was assured that the museum had security," Shaw said in the film.

Museum staff arrived in the morning to find the shoes missing from a smashed glass case. The alarm had been tripped but a signal was not sent to police dispatch, museum co-founder John Kelsch said in the documentary. Miner and Kelsch vehemently denied rumors of an inside job. "We're the ones that want to find them because they were entrusted to us," Miner said. "Our people, they love the museum. They wouldn't have done that. These are honest people," Kelsch said.

Ten years later, the museum worked with the Itasca County Sheriff's Dive Team to address the theory that someone threw the slippers in a nearby lake. During the 40th Annual "Wizard of Oz" Festival, divers scoured the depths of the Tioga Mine Pit Lake. But they came up empty-handed.

In the documentary, Shaw says he bought the shoes from a Hollywood costume designer who found them in MGM Studios' backlot property in Culver City, California. As the story goes, Kent Warner found several pairs on a dusty shelf, and brought one to the famed MGM Studios auction in 1970. He kept the rest for himself -- the exact number is not clear -- selling them off to collectors, including Shaw.

Meanwhile, a Tennessee schoolteacher won another pair in a contest in 1940. She sold them at auction in 1988 to a private collector for $165,000.

Another pair has been on display in the Smithsonian's National Museum of American History in Washington, DC, since 1979. In 2016, the organization launched an online campaign to raise money to restore their luster.

In 2012, Leonardo DiCaprio led a group of donors in purchasing a pair to be displayed at the Academy Museum of Motion Pictures, set to open this year in Los Angeles.