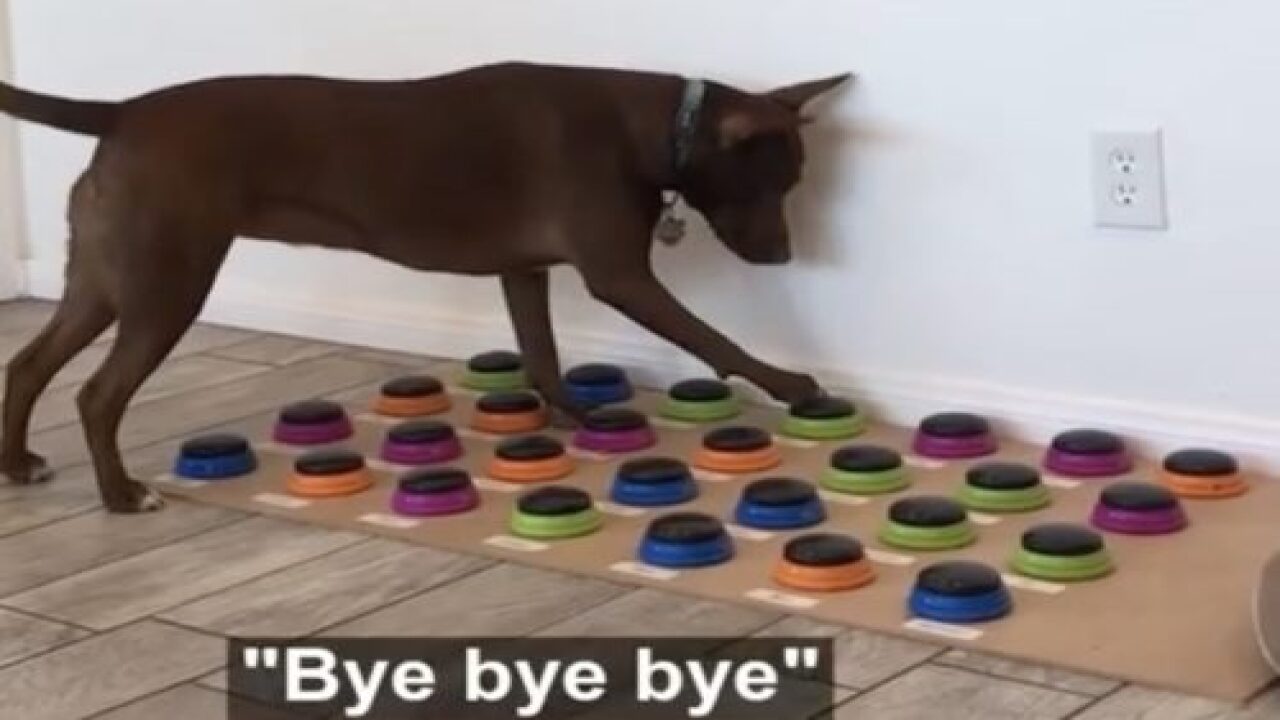 Hey, everyone: Meet Stella the dog! Or, as she might say, “Look! Stella!”

Stella’s been working on her human communication skills with the help of her owner, speech-language pathologist Christina Hunger. Using paw-sized buttons that play words recorded by Hunger, Stella taps out short phrases to share her needs and emotions.

Here’s Stella on Hunger’s Instagram, saying, “Outside, Stella, walk,” and pawing at the door.

Combined with the scratch at the door and a plaintive whine, is there any doubt what Stella’s trying to say?

Hunger uses similar equipment, called augmentative and alternative communication devices, in her work with very young children. After adopting Stella as a puppy, she and her fiancé, Jake, started experimenting with an “outside” button for Stella to press.

Before long, Stella was using the “outside” button without help, and Hunger began expanding her vocabulary.

In this video, Stella says “Happy, ball, want, outside” after Hunger pressed “ball” accidentally. (Stella didn’t know it was a mistake and got excited for playtime!)

Last night, right before this video was taken, I accidentally said “ball” on Stella’s device while I was actually reaching for a different word. But, Stella took this very seriously! She picked up her ball, dropped it on her device, and said “Good” (Translation: Good idea, Mom!) • I started recording right after she said “Good” and caught the rest of her thought: “Happy ball want outside!” • Like all AAC users, Stella thrives when we talk to her using her device and say words that she loves. She never needs to know it was on accident! ð • • • • • #hunger4words #stellathetalkingdog #slpsofinstagram #speechtherapy #AAC #ashaigers #slp #corewords #SLPeeps #slp2be #aacawarenessmonth #earlyintervention #languagedevelopment #dogsofinstagram #dogmom #doglife #dogs #animalpsychology #doglover #dogvideos #sandiegodog #catahoula #blueheeler #smartdog #dogcommunication #mydogtalks #animalcommunication #interspeciescommunication #loveanimals

“Every day I spent time using Stella’s buttons to talk with her and teach her words just as I would in speech therapy sessions with children,” Hunger writes on her blog, Hunger For Words. “Instead of rewarding Stella with a treat for using a button, we responded to her communication by acknowledging her message and responding accordingly.”

Stella, a Blue Heeler/Catahoula Leopard Dog mix, is now 18 months old and uses at least 29 words. According to People, two of her favorite words are “walk” and “beach” — perfectly appropriate, since she lives in San Diego, California.

As Hunger writes in the Instagram post below, Stella’s also capable of using combinations of words even when she’s a little on edge. In the video, Stella uses a couple of worried “borks” and her soundboard to talk about a strange noise she heard outside.

Stella uses language differently when she’s in a heightened state versus when she’s calm! • Today when she heard some noises outside and wanted to go investigate, I told her we were staying inside. • Stella responded by saying, “Look” 9 TIMES IN A ROW, then “Come outside.” She was clearly in a more frantic state, and her language use matched that. We all sound differently than normal when we’re in distress, Stella included! • I’m impressed that Stella is communicating with language during her more heightened states, not just when she’s calm and in a quiet space. This shows me that words are becoming more automatic for her to use. It’s similar to when a toddler starts using language to express himself during times of frustration instead of only crying. That happens when it’s easy for the toddler to say words, not when he’s still learning and it takes a lot of focus to talk ð§ ð£ • • • • • #hunger4words #stellathetalkingdog #slpsofinstagram #speechtherapy #AAC #ashaigers #slp #corewords #SLPeeps #slp2be #earlyintervention #languagedevelopment #dogsofinstagram #dogmom #doglife #dogs #guarddog #animalpsychology #doglover #dogvideos #sandiegodog #catahoula #blueheeler #smartdog #dogcommunication #mydogtalks #animalcommunication #interspeciescommunication #loveanimals

Stella can express her negative feelings as well. When her owners did not feed her as expected after Daylight Savings Time started in April, Stella requested food repeatedly but did not get it.

“When Jake and I did not feed her dinner this early she said, ‘love you no’ and walked into the other room,” Hunger relates in her blog.

Some scientists are working on artificial-intelligence-guided systems for human-animal communication. Hunger’s method seems pretty simple by comparison. But the results speak for themselves.

“I’m in constant amazement and shock,” Hunger told People. “Every day she says something cooler than she said the day before.”