Trump's immigrant deportations could clog up courts for years 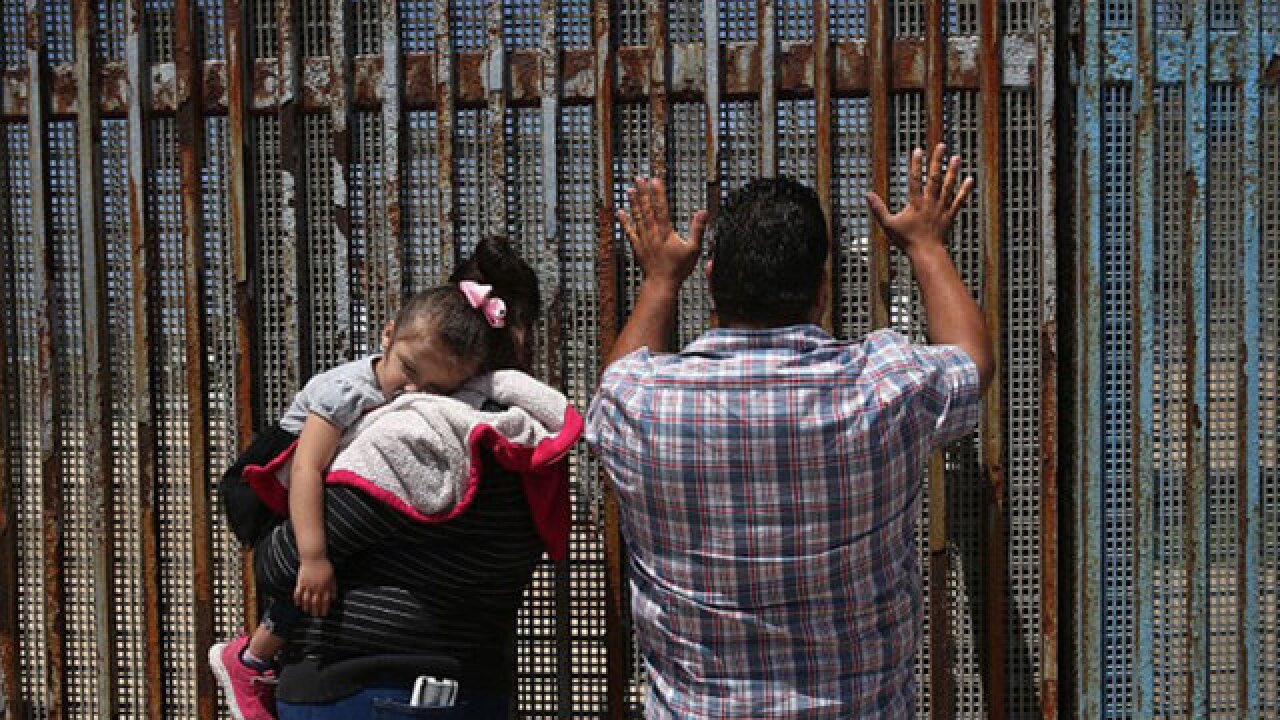 <p>A family speaks through the U.S.-Mexico border fence on May 1, 2016, in Tijuana, Mexico. They came to see family member "dreamers" who immigrated as children to the U.S. and now live in Wichita, Kansas.  (Photo by John Moore/Getty Images)</p>

President Donald Trump’s executive orders on immigration are meant to speed up deportations of undocumented immigrants, but the result could be an extreme logjam for the courts that vet them.

Currently the country-wide U.S. immigration court system — which handles most immigrant deportation proceedings — maintains an average backlog of more than 533,000 cases and the average wait time for a hearing is about three years, according to data from TRAC, a Syracuse University program that FOIAs the government’s internal databases.

Under Trump’s new orders to round up more undocumented immigrants, it’s likely that wait time will grow dramatically.

“To just get rid of the current backlog it would probably require the near doubling of immigration judges, but that’s not an easy thing to do,” said Randy Capps, director of research for U.S. programs at the Migration Policy Institute. “First of all you have to have the money, you have to have qualified immigration judges … you have to have more [Immigrations and Customs Enforcement] prosecutors and the detention space to hold people. There’ a lot of resources involved. It’s not something that can be ramped up quickly.”

Trumps executive order on border security addresses some of those needs. It calls for an increase of 5,000 border patrol agents and an unspecified increase in judges within the immigration court system, which is an administrative court formally known as the Executive Office for Immigration Review within the Justice Department.

But there’s one gaping problem. The executive order lacks the authority to allocate money to hire more people to fill those spots. Additionally, another one of Trump’s executive orders expressly forbids new federal hiring — which could mean no new judges can be hired for the immigration courts.

Taken all together, the lack of clarity has immigration court judges worried.

“It’s too early for us to know whether or not that’s going to be a feasible plan,” said Judge Dana Lee Marks, president of the National Association of Immigration Judges. “We don’t know whether we’re going to fall under the general freeze or not because we don’t have an Attorney General at this point.”

There are currently 300 judges who hear cases in the immigration court. Each judge is currently responsible for an average of 1,500 cases annually — a number much higher than NAIJ’s recommended caseload of 700 to 800.

Experts such as Capps believe that in order to simply get through the more than 500,000 hearings on the docket and end the years long waitlist, the number of judges would have to be doubled. If Trump were to follow through with his promise to deport 2 million to 3 million illegal immigrants in the next few years, they say the number of judges would also have to be increased exponentially.

According to Susan Long, co-director of TRAC, if Trump’s executive order were to increase detainments but not increase the number of judges, it could become “an impossible task.”

Experts say that beefing up border security and immigration officers frequently takes priority in Congress — likely because it’s popular with constituents. Hiring new judges for the immigration court to handle the new flow of cases typically takes the backseat.

And the hiring discrepancy is well documented. According to Marks, between 2006 and 2011, money allocated toward border patrol and immigration enforcement rose 400 percent. Yet during that same time period, the immigration court’s budget only increased 74 percent.

“We often call ourselves the ‘Legal Cinderellas’ because we feel like we are an afterthought,” she said.

Trump does have other means of deporting undocumented immigrants that would circumvent the system if deportations increase. Currently there’s a measure in place that was granted by Congress in 1996 called Expedited Removal that allows for immediate deportation at U.S. ports of entry and along the border. Over the years, the provision has been expanded to allow ICE in some circumstances to deport undocumented individuals within the interior of the United States without granting them hearings. Capps believes its likely Trump will work to expand that measure to encompass the entire interior.

Last week Chief Immigration Judge MaryBeth Keller directed the immigration courts in a memo to refocus their efforts on hearing detainment cases before those of children and families seeking asylum—a 180 from the policy positions under President Obama. NAIJ supported the directive because the group believes detained immigrants should be heard first. They hope the change will also free up room in the detention system — which is another area of concern.

Currently ICE operates and rents approximately 39 to 45 thousand detention beds throughout the country, according to William Stock, president of the American Immigration Lawyers Association. Many of those detained are released pending court date, but others are held if its believed they will not show up. If millions of new detainments were to occur under Trump’s executive order, experts estimate bed space may need to be quadrupled.

Marks believes that lacking detention space ultimately will tie ICE’s hands. Without a bill from Congress, neither Trump nor ICE can allocate money to build new detention facilities or rent bed space from private prisons. Without more facility space to hold illegal immigrants, ICE won’t be able to pick up more undocumented individuals. And unless the immigration court receives new judges — also through an act of Congress —they can’t start moving illegal immigrants through the court system — and out of detention — at a quicker pace.

“I think ICE would be forced to stop. Because if the cases don’t move through and aren’t adjudicated they run out of detention space, there’s a finite amount of detention space, Marks said. “So that’s why there’s so much uncertainty right now; and it makes it very difficult to project how this is going to work.”