This Wedding Party Ventured Out In A Surprise Snowstorm, And The Photos Are Beautiful 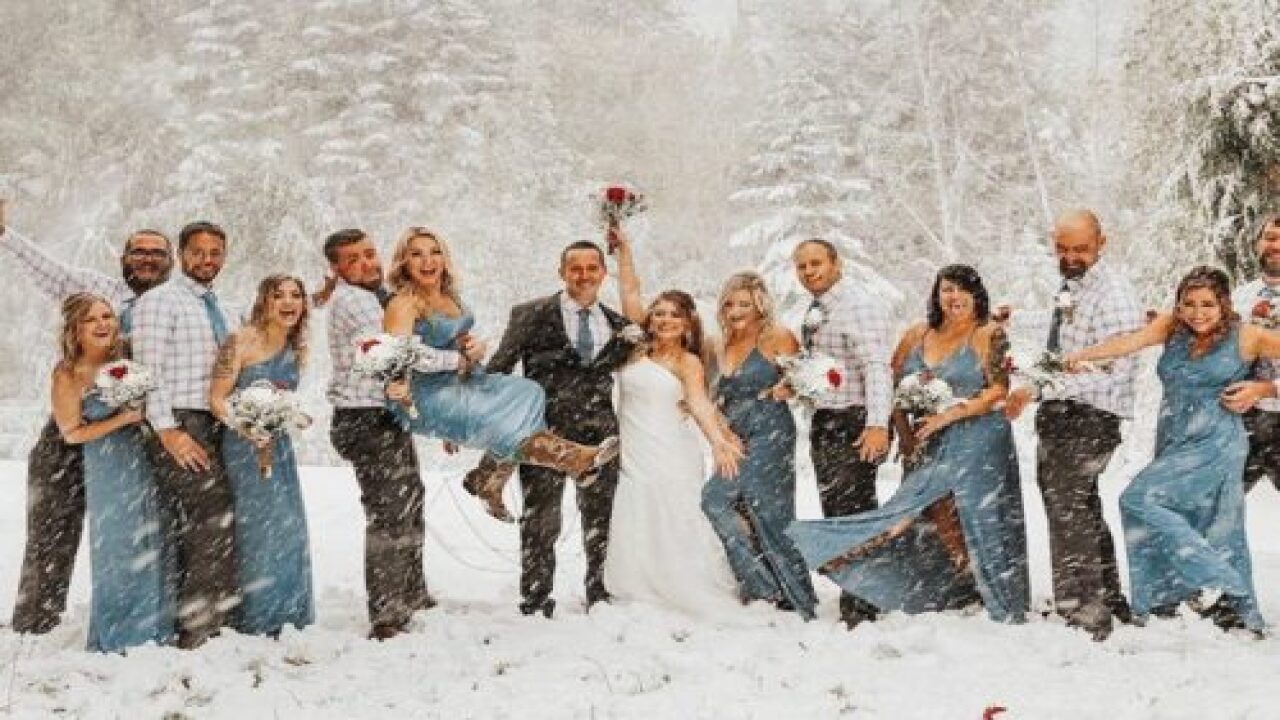 Ah, September weddings. Not too hot, not too cold, gorgeous colors emerging in the trees, and a cool evening reception with red wine and hot apple cider.

Or: A raging snowstorm and a strapless wedding gown.

The latter option is what happened to Brittany and Sean Tuohy, a couple married in western Washington on Sept. 28. The pair made the best of the snowy situation, though, and captured some stunning snaps in the unexpected weather.

The couple planned the wedding from their home in Arizona, but there was no way of knowing that a blizzard would descend upon the Spokane area on their big day. According to photographer Jaime Fletcher, the wedding party quickly adapted to their wintry surroundings.

“I got up there and imagined they’d be in bad spirits and it was quite the opposite,” Fletcher told “Today.” “They were laughing and giggling about how Brittany has the worst luck.”

Fletcher said the party decided to “wing it” and scampered outside to get photos in the snow. The photographer posted some of those photos on her Instagram account:

We have made it on tv now! @foxnews, @thetodayshow, @homeandfamilytv & @datelinenbc all featured the story today on air! How freaking cool is this? No pun intended â¤ï¸ #jaimedenisephotography

In this post, Fletcher says the group was only outside for about 10 minutes because of the conditions.

They were still able to get this magical pic of the bride and groom, though:

Hey honey, remember that one time we decided to travel from Arizona and have a September Fall Wedding in Washington? Well, I made it off the mountain tonight with about a foot of snow on my car. The road still hasn't been plowed, so I am really hoping the guests make it home okay. It was a really scary drive back down to town. WHAT A DAY. What a freaking wild day. Who ever would've thought we'd get an actual BLIZZARD on Mt. Spokane on September 28th? WITH LIKE AN ACTUAL FOOT OF SNOW AND COUNTING? Not me. Not anyone. These two were absolute champions changing their completely OUTDOOR wedding to a COMPLETELY INDOOR Wedding last minute… and they even let me take them outside for a few photos – we literally were only out there for 10 minutes because the winds ALL day were so out of control. This one was just as the snow really started to get bad. Thank you to Brittany & Sean for having the best attitude about the uncontrollable atmosphere. You made the chaos absolutely beautiful! Your love for each other warmed all of us â ï¸

“Sean was so sweet with her, picking snow out of her eyelashes,” Fletcher told USA Today. “I just thought it was really special they made the best of it. They really wanted to get married, regardless of the crazy storm outside, and they did it.”

Here’s another photo of the happy couple taking a stroll in the unusual autumn snowfall.

In less than 48 hours, I’ve gone viral. My wonderful bride and groom and I truly never imagined in a million years this would blow up as much as it has. The amount of love and support I’ve received is so overwhelming. I’ve been interviewed by so many national – and now international news stations… it’s so cool. And very humbling seeing my photos on every single major and local news site. I just want to say thank you for all of it. God is good. #jaimedenisephotography

The snowstorm that descended on the Tuohys’ wedding was a historic event: It was only second time since the 19th century that measurable snow has fallen in Spokane in September. The National Weather Service’s Spokane office reported 3.1 inches on the ground at their location after the storm passed.

After the wedding, the Tuohys jetted to Germany for their honeymoon, and Fletcher is still impressed by their positive attitude.

“They didn’t anticipate snow on their wedding day, let alone snow flying in their faces at 30 miles per hour,” she told “Today.” “I was thankful they loved [the photos] as much as I do.”