Copyright 2012 Scripps Media, Inc. All rights reserved. This material may not be published, broadcast, rewritten, or redistributed.
ABC15 viewer submission
&lt;p&gt;Lightning over the Valley on June 7.&lt;/p&gt;

Lightning is one of the first signs of a monsoon storm.

It's incredibly hot. In fact, five times hotter than the surface of the sun, at an astounding 50,000 degrees Fahrenheit.

Lightning is simply electricity.  It forms in the up and down air currents inside cumulonimbus clouds when water droplets, hail and ice crystals collide.

The positive and negative electrical charges in the cloud separate from one another. The negative charge drops to the bottom while the positive charge stays in the middle and upper parts of the cloud. 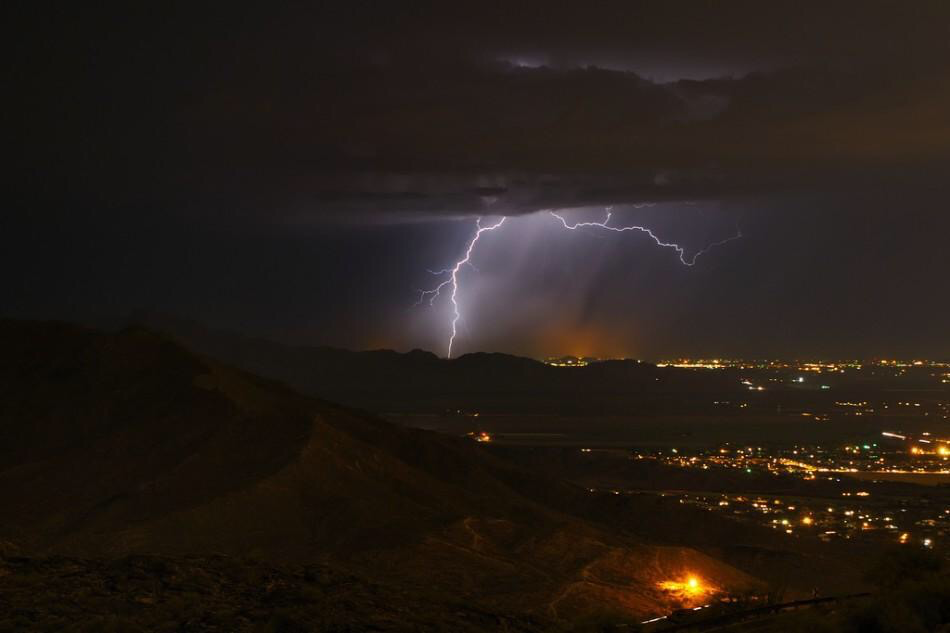 Lightning is the result of the build-up and discharge of electrical energy between the positive and negative charged areas. In other words, opposites attract.

Only 20 percent of all lighting strikes actually make it down to the ground. Strikes more often occur within a single cloud or from one cloud to another.

Lightning is very powerful and will seek the path of least resistance, striking whatever is closest to it.

It’s common to think lightning will strike a metal object before it hits anything else, but that’s not true.

It just so happens that most of our tallest objects are metal, like telephone poles, towers on top of buildings and transformers. Lightning will not specifically seek out metal objects. Metal just serves as a good conductor.

If you look up in the afternoon during the monsoon, dark puffy clouds have usually formed to the east.

They are cumulonimbus clouds, also known as “thunderheads,” and can reach heights near 50,000 feet covering up to 200 square miles.

Inside, they are full of moisture and electricity bringing lots of thunder and lightning.

We don’t always see the lightning, but we know it’s there when we hear thunder.

Thunder happens when the air surrounding the lighting strike heats up so fast that it causes the air to expand explosively, creating a shockwave that becomes a booming sound wave.

The distance you are from the lightning strike will affect the sound you hear when it strikes.

Depending on wind direction and temperature, you may hear thunder from 20 miles away.

The sooner you hear the clap of thunder, the closer you are to the storm.

The best way to figure out how far from the lightning you are is to use the five-second rule. For every five seconds that go by between seeing the flash of lightning and hearing the clap of thunder, you are one mile away from the storm.