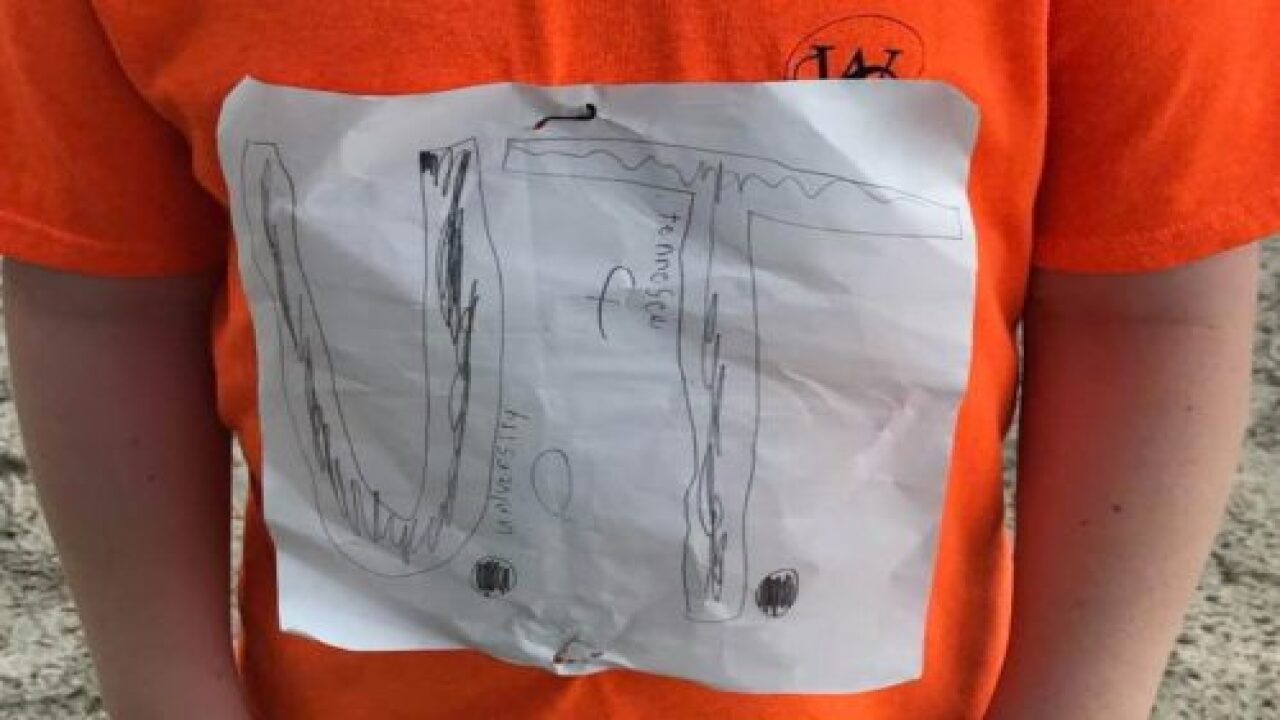 When a boy was teased at school for his homemade collegiate attire, teacher Laura Snyder posted to the internet. As a result, the University of Tennessee stepped up and made him feel welcome again.

Snyder, who lives in Altamonte Springs, Florida, posted to her Facebook page on Sept. 4 about the excitement of one of her elementary school students about college colors day, where students can wear the attire of their favorite college to school.

“When I told my students about this day a week before, this particular child came to me and told me that he wanted to wear a University of Tennessee shirt, but he didn’t have one,” Snyder wrote. “We discussed that he could wear an orange shirt to show his spirit. He told me every day leading up to it that he had an orange shirt that he was going to wear. So when the day finally arrived, he was SO EXCITED to show me his shirt. I was impressed that he took it one step further to make his own label.”

The boy was thrilled to show his University of Tennessee pride by wearing the school colors. However, his excitement faded after an incident at lunch.

After the boy went to lunch, he came back to the classroom crying.

“Some girls at the lunch table next to his (who didn’t even participate in college colors day) had made fun of his sign that he had attached to his shirt,” Snyder said. “He was DEVASTATED. I know kids can be cruel, I am aware that it’s not the fanciest sign, BUT this kid used the resources he had available to him to participate in a spirit day.”

In her original post, which she made public, Snyder said she planned to get her student a T-shirt herself and asked if any of her Facebook friends knew of University of Tennessee contacts who could help make it an extra-special gift.

Not only did Synder get the contacts she wanted, but she also received also thousands of positive comments and a big box of UT swag from the college alumni office for the boy to share with his classmates. The teacher expressed amazement at the response from the public and by the university, whose teams are known as the Volunteers.

Here’s the swag she received from UT:

“This experience is uniting my class even more than I could have imagined, and it was truly amazing to witness!!,” she said in a post update. “The Vols spirit was definitely felt in my classroom today!”

“All who saw had either goosebumps or tears while we explained that he had inspired and touched the lives of so many people,” Snyder said when she relayed the gifts and well-wishes to her student.

UT went a step further and created a T-shirt for sale that uses the boy’s design. Part of the proceeds from the shirt will go to STOMPOutBullyng. The shirt costs $14.99 and is available for pre-order.

Share in a Florida elementary student's Volunteer pride by wearing his design on your shirt too! Pre-order today for a late September expected delivery. A portion of proceeds from every shirt sold will be donated to @STOMPOutBullyng .https://t.co/NdnTtYREFL pic.twitter.com/OeTZvgC09Y

“When I told him that his design was being made into a real shirt and people wanted to wear it, his jaw dropped,” Snyder posted. “He had a big smile on his face, walked taller, and I could tell his confidence grew today! Thank you to the UT Nation for that!!

Some Twitter commenters have said that the boy should get some of the proceeds from the T-shirt sale since it was his design, either for a college scholarship or otherwise. Many also praised the teacher’s efforts and college’s actions on behalf of the young student.

In her Facebook post, Snyder shared a note from the boy’s mom, who wrote, “I know that he will be over the moon when he receives his UT Vols shirt and blown away by the support of all these people he’s never even met!”

We love this happy result for a creative kid!