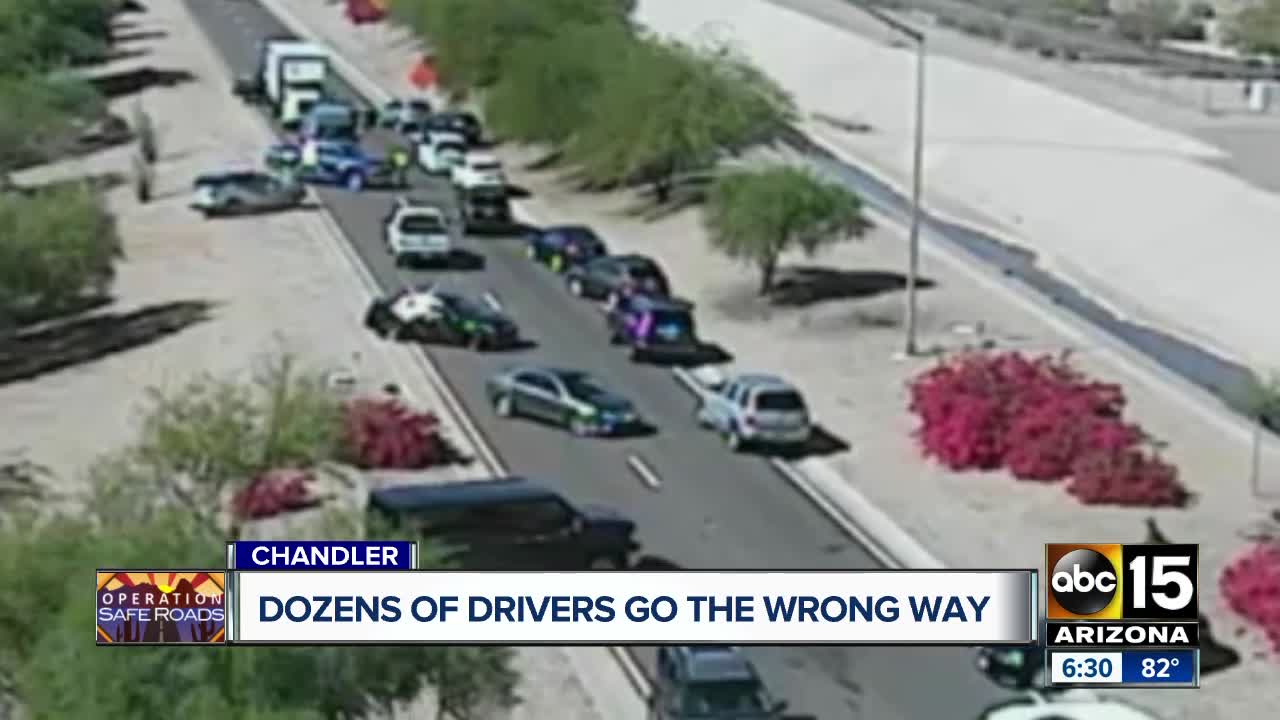 Dozens of drivers were caught going the wrong-way on an on-ramp at McClintock Drive for the Loop 202 over the weekend. 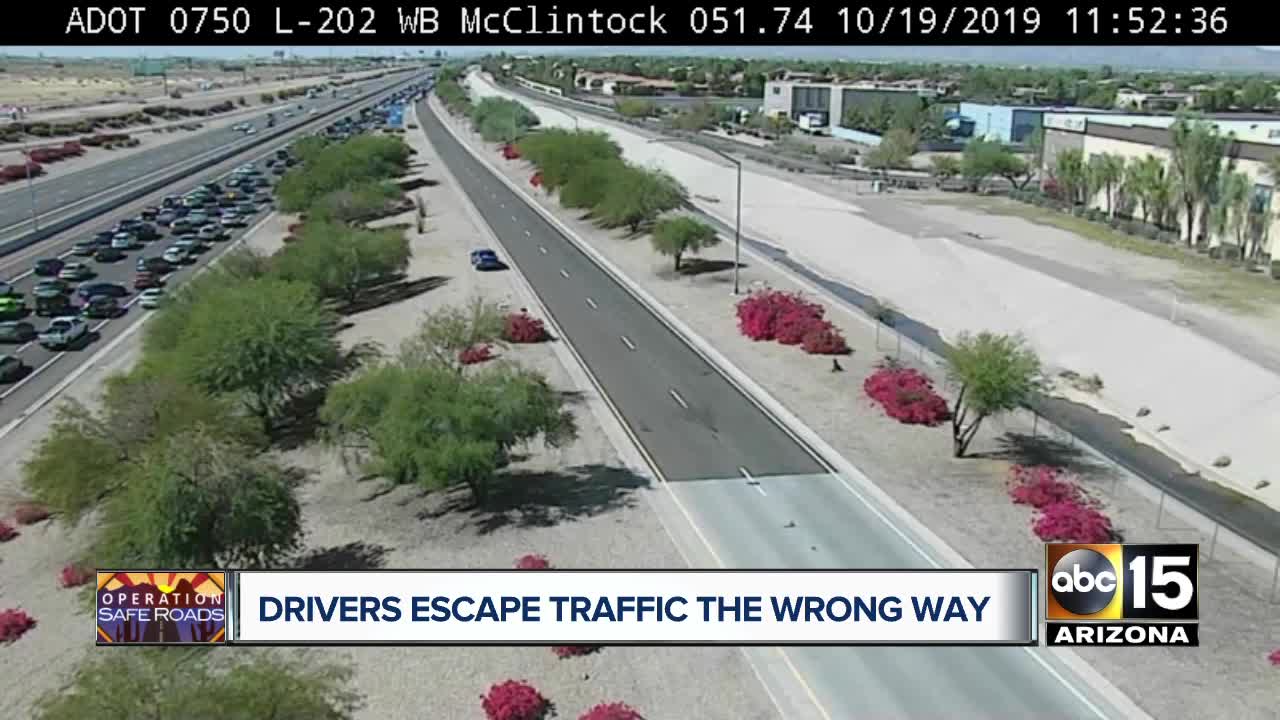 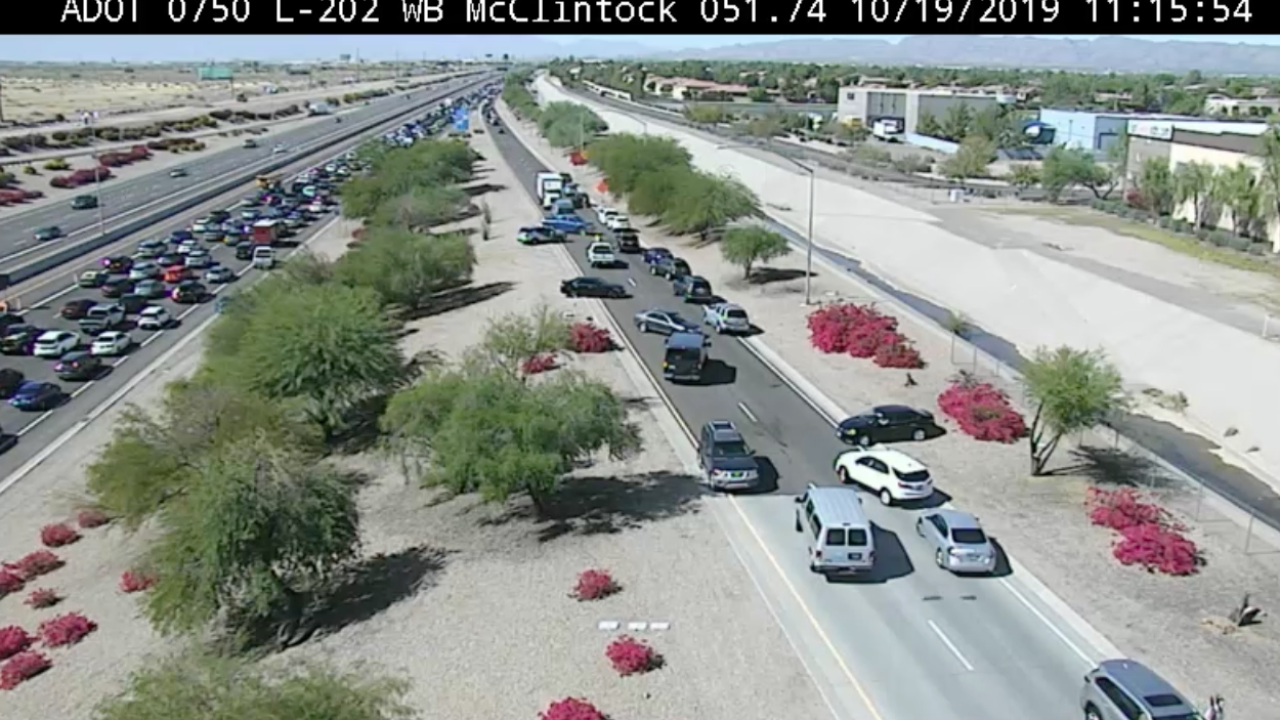 CHANDLER — Multiple drivers were seen traveling the wrong-way on L-202 westbound (Santan), attempting to use an on-ramp as an off-ramp to avoid backed up traffic.

DPS tweeted the following information Saturday after multiple inquiries from our newsroom.

Avoid WB SR-202 near McClintock. Troopers are citing those who drive wrong-way & on the shoulder.

All of our resources in the area are focused on dealing with these dangerous drivers. Please note these delays are also impacting SR-101. #AZTraffic #AZTroopers https://t.co/yVNsh4maUE

In an interview with ABC15 on Monday morning, Trooper Montes said they did not know how many drivers had been cited.

"But, I know that our troopers arrived on scene and they were handing out lots of citations for people that were doing that," Montes said.

When ABC15 pressed further for an exact number, we were told by the department it was less than 10 citations issued to wrong-way drivers.

Late Monday afternoon, an email was sent by DPS writing in part:

There were four warnings issued by a sergeant who was east of the on-ramp where this occurred. He was stopping people for traveling on the shoulder, attempting to bypass the congestion.

There was one citation issued for a collision that happened in the area.

There were no citations given to motorists who traveled wrong-way on the on-ramp.

As to why no citations were given to the more than 30 wrong-way drivers on the on-ramp, Sgt. Kameron Lee with DPS wrote, "While every driver involved likely deserved a citation, we did not have the time nor manpower to take enforcement action. Stopping individual motorist to issue citations can take 10+ minutes. This likely would have exacerbated this problem."

ADOT addressed the wrong-way drivers in a tweet, stating "On-ramps are not for escaping traffic. These drivers, who didn't heed our many closure announcements, headed into the closure on L-202 WB Santan. Now they're putting other drivers at risk by driving wrong-way up the McClintock on-ramp. That's a Trooper turning them around."

DPS says they treated the incident as a matter of "public safety and not necessarily enforcement."

This is not the first time drivers have used construction as an excuse to travel the wrong-way during freeway construction. On September 28, drivers reversed course to avoid the backup leading to a closure on I-10.

On-ramps are not for escaping traffic. These drivers, who didn't heed our many closure announcements, headed into the closure on L-202 WB Santan. Now they're putting other drivers at risk by driving wrong-way up the McClintock onramp. That's a Trooper turning them around. pic.twitter.com/y9pY7Rb8as