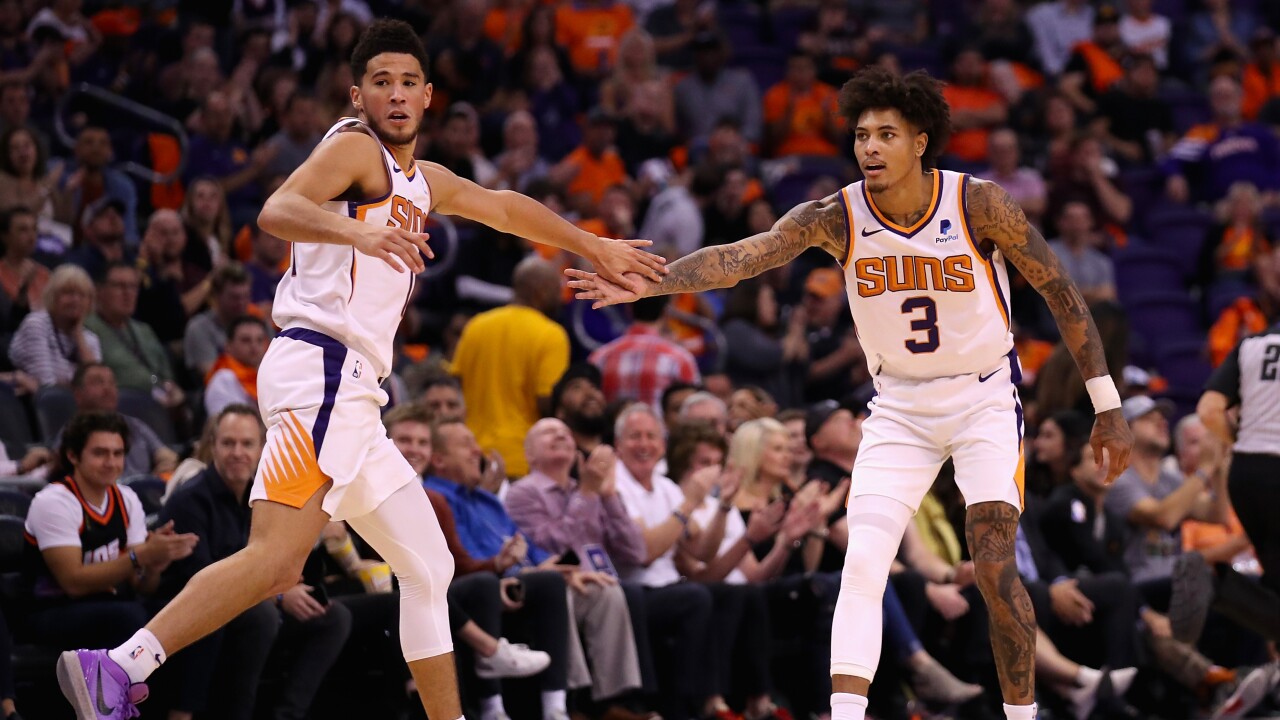 Christian Petersen/Getty Images
PHOENIX, ARIZONA - OCTOBER 23: Kelly Oubre Jr. #3 of the Phoenix Suns high fives Devin Booker #1 after scoring against the Sacramento Kings during the second half of the NBA game at Talking Stick Resort Arena on October 23, 2019 in Phoenix, Arizona. The Suns defeated the Kings 124-95. NOTE TO USER: User expressly acknowledges and agrees that, by downloading and/or using this photograph, user is consenting to the terms and conditions of the Getty Images License Agreement (Photo by Christian Petersen/Getty Images)

PHOENIX — The Phoenix Suns are off to the best start that they’ve had in years, after improving to 3-2 Wednesday night at Golden State.

Center Aaron Baynes had 24 points, 12 rebounds, seven assists and three blocked shots, and Devin Booker scored 31 points as the Suns jumped out to a huge lead they never relinquished.

Their 3-2 start comes with two losses that came down to the wire, and easily could have gone the other way.

The off-season acquisitions that many across the NBA questioned are proving people wrong early in the year, leading to an optimism that most fans haven’t felt in years.

Ricky Rubio has gelled well with Booker, Kelly Oubre Jr and company, offering veteran leadership that neither has had from a point guard in the past.

Big men Frank Kaminsky and Baynes have look re-energized, especially while filling in for Deandre Ayton during his suspension. The two are averaging double figures scoring, and providing six rebounds each per game.

Trying to score on Baynes?

You're gonna have a bad time... pic.twitter.com/NqIabiUipq

And point guard Jevon Carter has brought spark off the bench, especially on the defensive side of the ball.

Carter has played with energy, frustrating opponents and energizing the Suns crowd.

Teacher : What do you want to be when you grow up?

Moving forward, the question will be whether or not the young group can continue to play with the same fire and continue to grow as a new unit. It’ll be interesting to see how Booker settles in as he learns to play off the ball again with Rubio at the helm, and how Ayton bounces back after his suspension.

The Suns’ next few games will help show fans what their true identity will be this season, facing off against Memphis, Philadelphia and Miami, all three of which are potential playoff teams.

While there are plenty of question marks, one thing that is for certain is that it is fun to be along for the ride again.