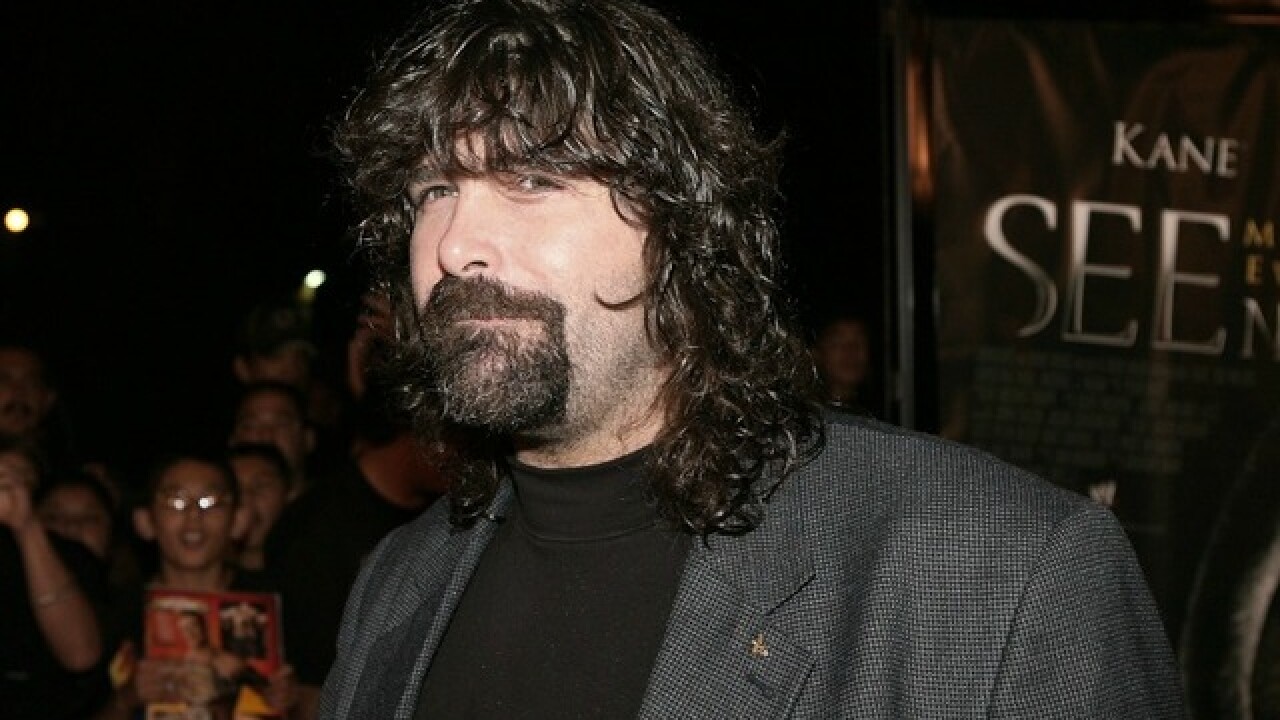 Copyright 2018 Scripps Media, Inc. All rights reserved. This material may not be published, broadcast, rewritten, or redistributed.
<p>Wrestler Mick Foley arrives at the Lions Gate Premiere of 'See No Evil' at the Century Stadium Promenade 25 on May 8, 2006 in Orange, California. (Getty Images)</p>

Pro wrestling legend and bestselling author Mick Foley is also known for being a funny guy -- and he'll soon be bringing his comedy tour to the Valley.

The former three-time WWE world champion-turned comedian, who's perhaps best known for his fall off a cage in a "Hell in a Cell" match vs. The Undertaker 20 years ago, will host "20 Years of Hell" at Rick Bronson's House of Comedy in Phoenix on May 24.

"I take people on an in-depth journey and try to bring back the emotions of that match on stage," Foley told ABC15. "It is my attempt to bring that night alive on stage."

Current WWE star and comedian Dolph Ziggler, a former world champion in his own right, will also appear at Foley's event. Former WWE ring announcer and Valley resident Justin Roberts will be the emcee.

"Dolph’s a great comic. He’s a real student of comedy," Foley said. "He joined me after the Q&A the last time I was in Arizona. This time he’ll be doing his own set and joining me for the Q&A, as well."

The 52-year-old Foley had a pro wrestling career that spanned nearly 30 years. He was known by several names in WWE, WCW and elsewhere, including Mankind, Cactus Jack and Dude Love. He has written multiple bestselling books and starred in "Holy Foley," a reality show about his family, from 2016-17.

Some of Foley's most memorable wrestling moments have taken place in Arizona. In 1999, he defeated The Rock in an empty arena match at Tucson Convention Center that aired during halftime of the Super Bowl to win the then-WWF championship for the second time. In 2007, he made an appearance with the Suns Gorilla at WWE Raw in Phoenix to help promote the upcoming "hair vs. hair" match between WWE chairman Vince McMahon and eventual 45th U.S. president Donald Trump.

"I was in incredible pain, and had it not been for the release of my Hardcore Diaries book, I believe I would have stayed in bed. That was about the worst I’ve ever been," Foley said about his 2007 appearance.

"I think Mr. McMahon was trying to pay me off, and I got him to pick up my hotel bill," he joked. "I traveled a long way in a lot of pain for that speech."

Foley competed in hundreds of memorable matches during his career. But for better or worse, he will forever be known best as the man who fell off the cage in 1998 -- a reality he's come to embrace.

"Part of my show is about dealing with the aftermath and the fallout from that match, and feeling for many years like I was Bill Murray in an airing of 'Groundhog Day' that never ends, and ultimately coming to embrace it," he said. "I’ve realized there are far worse things that you could be remembered for than a match 20 years ago."

Most shows on Foley's "20 Years of Hell" tour have already sold out -- but as of Wednesday afternoon, tickets for the May 24 show in Phoenix are still available. General admission costs $25, and VIP tickets -- which include a meet-and-greet with Foley himself -- cost $75.

The always-humble Foley has a message for those on the fence about attending the event.

"I think just take a chance. This is by far the best show I’ve ever done. I would ask them to trust me that they will have a much better time than they anticipate," he said.

"I don’t come out and do a Q&A like other guys do; I have a real show that I put my heart and soul into. It doesn’t matter if it’s 50 people or 300; I put everything I can into every show, and make it the best I can."