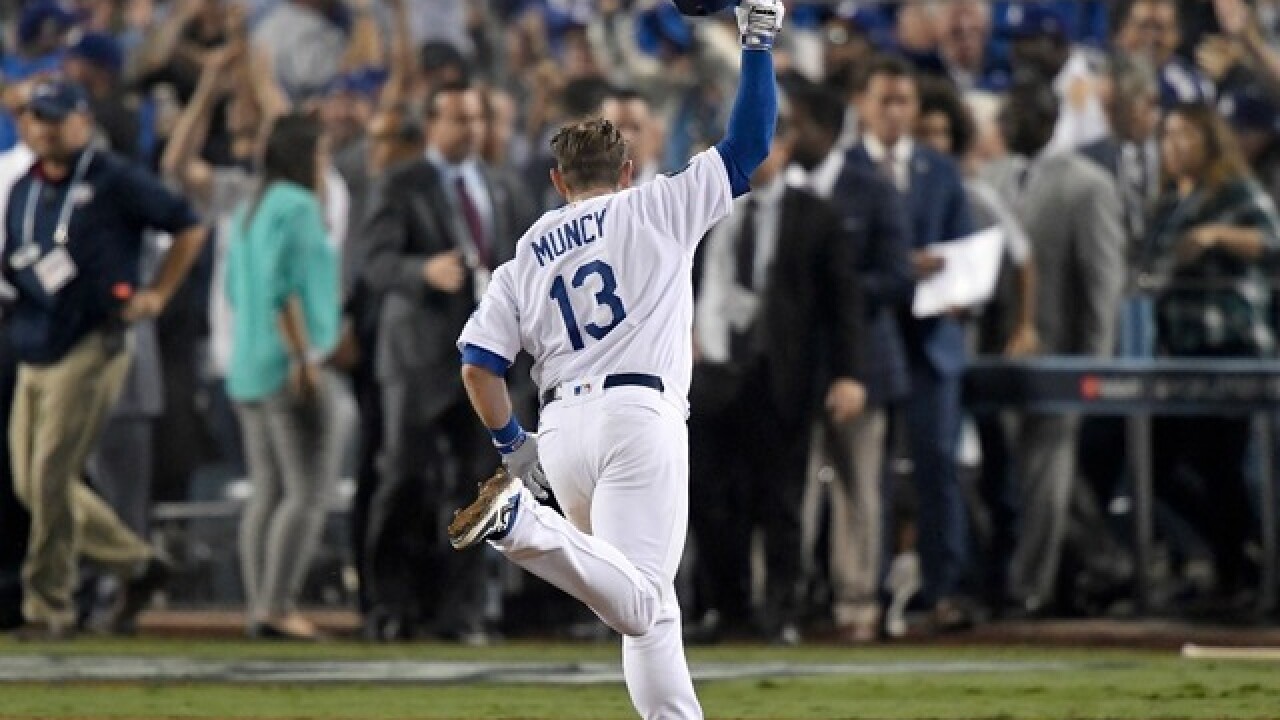 Copyright 2018 Scripps Media, Inc. All rights reserved. This material may not be published, broadcast, rewritten, or redistributed.
Kevork Djansezian
<p>Max Muncy #13 of the Los Angeles Dodgers celebrates his eighteenth inning walk-off home run to defeat the the Boston Red Sox 3-2 in Game Three of the 2018 World Series at Dodger Stadium on October 26, 2018 in Los Angeles, California. (Getty Images)</p>

Max Muncy, who played for the Mesa Solar Sox in the Arizona Fall League, hit a home run in the bottom of the 18th inning to lift the Dodgers to victory in Game 3 of the World Series at Dodger Stadium in Los Angeles. The Red Sox lead the best-of-seven series 2-1.

Both teams scored a run in the 13th inning, with the Dodgers scoring when they were down to their final out in the bottom half of the inning thanks to a Boston error.

It became just the eighth game, postseason or regular season, since 1908 to go at least seven hours.

Two outs. Bottom of the 13th. In comes Yasiel Puig.

18 innings and 7 hours later, Max Muncy was a hero

The previous longest game in MLB playoff history was 6 hours, 23 minutes, when the San Francisco Giants defeated the Washington Astros in a 2014 National League Division Series game. The previous World Series record was 5 hours, 41 minutes, set by the White Sox and Astros in Game 3 of the 2005 series.

Friday/Saturday's game was also the longest in World Series history in terms of innings played. The previous long: 14 innings, which happened three times, most recently in 2015.

The game itself went longer than the entire 1939 World Series. That year, the New York Yankees swept the Cincinnati Reds in four games that took a combined 7 hours, 5 minutes.

The game went so long that concession stands at Dodger Stadium eventually reopened. Beer sales, however, ended well before that.

YOU GUYS. They are literally re-opening concessions because this game is going so long. All they have is nachos, coffee and ice cream. #WorldSeries pic.twitter.com/8NZUsTAXEG

The crowd cheers wildly when the scoreboard shows that it's midnight, even though they stopped serving beer at Dodger Stadium 9 innings ago.

ASU football's radio crew, who is in Los Angeles to call Saturday's game between the Sun Devils and USC at 12:30 p.m. Arizona time, got tickets to the game -- but they weren't able to make it until the end, and they left just before midnight.